A root (or root word) is the core of a word that is irreducible into more meaningful elements. [1] In morphology, a root is a morphologically simple unit which can be left bare or to which a prefix or a suffix can attach. [2] [3] The root word is the primary lexical unit of a word, and of a word family (this root is then called the base word), which carries aspects of semantic content and cannot be reduced into smaller constituents. Content words in nearly all languages contain, and may consist only of, root morphemes. However, sometimes the term "root" is also used to describe the word without its inflectional endings, but with its lexical endings in place. For example, chatters has the inflectional root or lemma chatter, but the lexical root chat. Inflectional roots are often called stems, and a root in the stricter sense, a root morpheme, may be thought of as a monomorphemic stem.

The traditional definition allows roots to be either free morphemes or bound morphemes. Root morphemes are the building blocks for affixation and compounds. However, in polysynthetic languages with very high levels of inflectional morphology, the term "root" is generally synonymous with "free morpheme". Many such languages have a very restricted number of morphemes that can stand alone as a word: Yup'ik, for instance, has no more than two thousand.

The root is conventionally indicated using the mathematical symbol √; for instance, the Sanskrit root "√bhū-" means the root "bhū-".

The root of a word is a unit of meaning (morpheme) and, as such, it is an abstraction, though it can usually be represented alphabetically as a word. For example, it can be said that the root of the English verb form running is run, or the root of the Spanish superlative adjective amplísimo is ampli-, since those words are derived from the root forms by simple suffixes that do not alter the roots in any way. In particular, English has very little inflection and a tendency to have words that are identical to their roots. But more complicated inflection, as well as other processes, can obscure the root; for example, the root of mice is mouse (still a valid word), and the root of interrupt is, arguably, rupt, which is not a word in English and only appears in derivational forms (such as disrupt, corrupt, rupture, etc.). The root rupt can be written as if it were a word, but it is not.

This distinction between the word as a unit of speech and the root as a unit of meaning is even more important in the case of languages where roots have many different forms when used in actual words, as is the case in Semitic languages. In these, roots (semitic roots) are formed by consonants alone, and speakers elaborate different words (belonging potentially to different parts of speech) from the root by inserting different vowels. For example, in Hebrew, the root ג-ד-ל g-d-l represents the idea of largeness, and from it we have gadol and gdola (masculine and feminine forms of the adjective "big"), gadal "he grew", higdil "he magnified" and magdelet "magnifier", along with many other words such as godel "size" and migdal "tower".

Roots and reconstructed roots can become the tools of etymology. [4]

Similar cases occur in Hebrew, for example Israeli Hebrew מ-ק-מ‎ √m-q-m ‘locate’, which derives from Biblical Hebrew מקום‎måqom ‘place’, whose root is ק-ו-מ‎ √q-w-m ‘stand’. A recent example introduced by the Academy of the Hebrew Language is מדרוג‎midrúg ‘rating’, from מדרג‎midrág, whose root is ד-ר-ג‎ √d-r-g ‘grade’." [6]

According to Ghil'ad Zuckermann, "this process is morphologically similar to the production of frequentative (iterative) verbs in Latin, for example:

Decompositional generative frameworks suggest that roots hold little grammatical information and can be considered "category-neutral". [7] Category-neutral roots are roots without any inherent lexical category but with some conceptual content that becomes evident depending on the syntactic environment. [7] The ways in which these roots gain lexical category are discussed in Distributed Morphology and the Exoskeletal Model.

In support of the category-neutral approach, data from English indicates that the same underlying root appears as a noun and a verb - with or without overt morphology. [7]

Although all words vary semantically, the general meaning of a greasy, fatty material can be attributed to the root.

Alexiadou and Lohndal (2017) advance the claim that languages have a typological scale when it comes to roots and their meanings and state that Greek lies in between Hebrew and English. [12]

In linguistics, an affix is a morpheme that is attached to a word stem to form a new word or word form. Affixes may be derivational, like English -ness and pre-, or inflectional, like English plural -s and past tense -ed. They are bound morphemes by definition; prefixes and suffixes may be separable affixes. Affixation is the linguistic process that speakers use to form different words by adding morphemes at the beginning (prefixation), the middle (infixation) or the end (suffixation) of words.

A lexicon is the vocabulary of a language or branch of knowledge. In linguistics, a lexicon is a language's inventory of lexemes. The word lexicon derives from Greek word λεξικόν, neuter of λεξικός meaning 'of or for words'.

A lexeme is a unit of lexical meaning that underlies a set of words that are related through inflection. It is a basic abstract unit of meaning, a unit of morphological analysis in linguistics that roughly corresponds to a set of forms taken by a single root word. For example, in English, run, runs, ran and running are forms of the same lexeme, which can be represented as RUN. 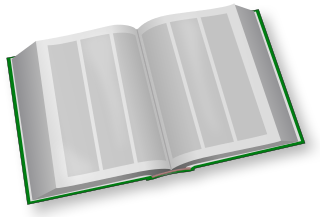 A morpheme is the smallest meaningful lexical item in a language. The field of linguistic study dedicated to morphemes is called morphology.

In linguistics, morphology is the study of words, how they are formed, and their relationship to other words in the same language. It analyzes the structure of words and parts of words such as stems, root words, prefixes, and suffixes. Morphology also looks at parts of speech, intonation and stress, and the ways context can change a word's pronunciation and meaning. Morphology differs from morphological typology, which is the classification of languages based on their use of words, and lexicology, which is the study of words and how they make up a language's vocabulary.

Morphological derivation, in linguistics, is the process of forming a new word from an existing word, often by adding a prefix or suffix, such as un- or -ness. For example, unhappy and happiness derive from the root word happy.

A synthetic language uses inflection or agglutination to express syntactic relationships within a sentence. Inflection is the addition of morphemes to a root word that assigns grammatical property to that word, while agglutination is the combination of two or more morphemes into one word. The information added by morphemes can include indications of a word's grammatical category, such as whether a word is the subject or object in the sentence. Morphology can be either relational or derivational.

In linguistics, a stem is a part of a word responsible for its lexical meaning. The term is used with slightly different meanings depending on the morphology of the language in question. In Athabaskan linguistics, for example, a verb stem is a root that cannot appear on its own, and that carries the tone of the word. Athabaskan verbs typically have two stems in this analysis, each preceded by prefixes.

In linguistics, a word of a spoken language can be defined as the smallest sequence of phonemes that can be uttered in isolation with objective or practical meaning. In many languages, words also correspond to sequences of graphemes ("letters") in their standard writing systems that are delimited by spaces wider than the normal inter-letter space, or by other graphical conventions. The concept of "word" is usually distinguished from that of a morpheme, which is the smallest unit of word which has a meaning, even if it will not stand on its own together or in other small words.

In linguistics, especially within generative grammar, phi features are the morphological expression of a semantic process in which a word or morpheme varies with the form of another word or phrase in the same sentence. This variation can include person, number, gender, and case, as encoded in pronominal agreement with nouns and pronouns. Several other features are included in the set of phi-features, such as the categorical features ±N (nominal) and ±V (verbal), which can be used to describe lexical categories and case features.

The roots of verbs and most nouns in the Semitic languages are characterized as a sequence of consonants or "radicals". Such abstract consonantal roots are used in the formation of actual words by adding the vowels and non-root consonants which go with a particular morphological category around the root consonants, in an appropriate way, generally following specific patterns. It is a peculiarity of Semitic linguistics that a large majority of these consonantal roots are triliterals.

In linguistics, a suffix is an affix which is placed after the stem of a word. Common examples are case endings, which indicate the grammatical case of nouns, adjectives, and verb endings, which form the conjugation of verbs. Suffixes can carry grammatical information or lexical information. An inflectional suffix is sometimes called a desinence or a grammatical suffix. Such inflection changes the grammatical properties of a word within its syntactic category. For derivational suffixes, they can be divided into two categories: class-changing derivation and class-maintaining derivation.

In Hebrew, verbs, which take the form of derived stems, are conjugated to reflect their tense and mood, as well as to agree with their subjects in gender, number, and person. Each verb has an inherent voice, though a verb in one voice typically has counterparts in other voices. This article deals mostly with Modern Hebrew, but to some extent, the information shown here applies to Biblical Hebrew as well.

In linguistic morphology, inflection is a process of word formation in which a word is modified to express different grammatical categories such as tense, case, voice, aspect, person, number, gender, mood, animacy, and definiteness. The inflection of verbs is called conjugation, and one can refer to the inflection of nouns, adjectives, adverbs, pronouns, determiners, participles, prepositions and postpositions, numerals, articles, etc., as declension.

Duna is a Papuan language of Papua New Guinea. It may belong to the Trans New Guinea language family and is often further classified as a Duna-Pogaya language, for Bogaya appears to be Duna's closest relative, as evidenced by the similar development of the personal pronouns. Estimates for number of speakers range from 11,000 (1991) to 25,000 (2002).