Last updated May 07, 2021
"Map winding number" redirects here. It is not to be confused with Winding number or Turning number.

In mathematics, the rotation number is an invariant of homeomorphisms of the circle.

It was first defined by Henri Poincaré in 1885, in relation to the precession of the perihelion of a planetary orbit. Poincaré later proved a theorem characterizing the existence of periodic orbits in terms of rationality of the rotation number.

Suppose that f: S1 → S1 is an orientation preserving homeomorphism of the circle S1 = R/Z. Then f may be lifted to a homeomorphism F: R → R of the real line, satisfying

for every real number x and every integer m.

The rotation number of f is defined in terms of the iterates of F:

Henri Poincaré proved that the limit exists and is independent of the choice of the starting point x. The lift F is unique modulo integers, therefore the rotation number is a well-defined element of R/Z. Intuitively, it measures the average rotation angle along the orbits of f.

then its rotation number is θ (cf Irrational rotation).

The rotation number is invariant under topological conjugacy, and even monotone topological semiconjugacy: if f and g are two homeomorphisms of the circle and

for a monotone continuous map h of the circle into itself (not necessarily homeomorphic) then f and g have the same rotation numbers. It was used by Poincaré and Arnaud Denjoy for topological classification of homeomorphisms of the circle. There are two distinct possibilities. 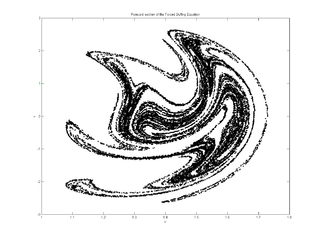 In mathematics, particularly in dynamical systems, a first recurrence map or Poincaré map, named after Henri Poincaré, is the intersection of a periodic orbit in the state space of a continuous dynamical system with a certain lower-dimensional subspace, called the Poincaré section, transversal to the flow of the system. More precisely, one considers a periodic orbit with initial conditions within a section of the space, which leaves that section afterwards, and observes the point at which this orbit first returns to the section. One then creates a map to send the first point to the second, hence the name first recurrence map. The transversality of the Poincaré section means that periodic orbits starting on the subspace flow through it and not parallel to it. 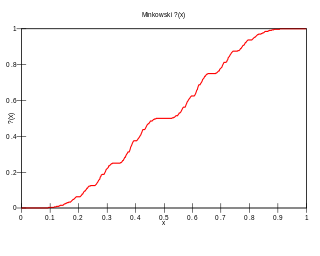 The dyadic transformation is the mapping

Bifurcation theory is the mathematical study of changes in the qualitative or topological structure of a given family, such as the integral curves of a family of vector fields, and the solutions of a family of differential equations. Most commonly applied to the mathematical study of dynamical systems, a bifurcation occurs when a small smooth change made to the parameter values of a system causes a sudden 'qualitative' or topological change in its behavior. Bifurcations occur in both continuous systems and discrete systems. The name "bifurcation" was first introduced by Henri Poincaré in 1885 in the first paper in mathematics showing such a behavior. Henri Poincaré also later named various types of stationary points and classified them with motif.

In mathematics, structural stability is a fundamental property of a dynamical system which means that the qualitative behavior of the trajectories is unaffected by small perturbations.

In mathematics, ergodicity expresses the idea that a point of a moving system, either a dynamical system or a stochastic process, will eventually visit all parts of the space that the system moves in, in a uniform and random sense. This implies that the average behavior of the system can be deduced from the trajectory of a "typical" point. Equivalently, a sufficiently large collection of random samples from a process can represent the average statistical properties of the entire process. Ergodicity is a property of the system; it is a statement that the system cannot be reduced or factored into smaller components. Ergodic theory is the study of systems possessing ergodicity.

In mathematics, Smale's axiom A defines a class of dynamical systems which have been extensively studied and whose dynamics is relatively well understood. A prominent example is the Smale horseshoe map. The term "axiom A" originates with Stephen Smale. The importance of such systems is demonstrated by the chaotic hypothesis, which states that, 'for all practical purposes', a many-body thermostatted system is approximated by an Anosov system.

In mathematics, two functions are said to be topologically conjugate to one another if there exists a homeomorphism that will conjugate the one into the other. Topological conjugacy is important in the study of iterated functions and more generally dynamical systems, since, if the dynamics of one iterated function can be solved, then those for any topologically conjugate function follow trivially.

In the mathematical theory of dynamical systems, an irrational rotation is a map

In mathematics, the Douady–Earle extension, named after Adrien Douady and Clifford Earle, is a way of extending homeomorphisms of the unit circle in the complex plane to homeomorphisms of the closed unit disk, such that the extension is a diffeomorphism of the open disk. The extension is analytic on the open disk. The extension has an important equivariance property: if the homeomorphism is composed on either side with a Möbius transformation preserving the unit circle the extension is also obtained by composition with the same Möbius transformation. If the homeomorphism is quasisymmetric, the diffeomorphism is quasiconformal. An extension for quasisymmetric homeomorphisms had previously been given by Lars Ahlfors and Arne Beurling; a different equivariant construction had been given in 1985 by Pekka Tukia. Equivariant extensions have important applications in Teichmüller theory, for example they lead to a quick proof of the contractibility of the Teichmüller space of a Fuchsian group.