Rutlish School is a state comprehensive school for boys, formerly a grammar school with the same name originally located on Rutlish Road, Merton Park, and relocated in 1957 on nearby Watery Lane, Merton Park, in southwest London. It is particularly noted for its most famous former pupil, the former Conservative politician and British Prime Minister Sir John Major, in its grammar school period in the 1950s.

The school is named for and honours the benefactor William Rutlish, embroiderer to Charles II. Rutlish was a resident of the parish of Merton and is buried in the churchyard of the parish church of St Mary. Rutlish died in 1687 and left £400 for a school (about £70,000 today) [3] for the education of poor children of the parish. [4]

By the 1890s the charity had accumulated a considerable excess of funds and John Innes, a local landowner and chairman of the board of trustees, used some of the excess to establish a school.

The first school building, established as a grammar school in the 1890s, was located in what is still designated Rutlish Road, off Kingston Road, by Merton Park station (now a tram stop). After World War II the school had outgrown its Victorian buildings (and the science block, built in the 1930s, had been destroyed as a result of enemy action) so in the early 1950s, John Innes buildings off nearby Mostyn Road were converted for use as the Junior School.

Though the work was not completed and the heating system was not installed, this opened after a delay, in late September 1953. A new building was planned for the rest of the school, on the present site south of Watery Lane. The new school buildings opened in September 1957.

Both this and the Junior School were on land that had belonged to John Innes and which had been occupied until 1945 by the John Innes Horticultural Institution (now the John Innes Centre in Norwich). The original buildings in Rutlish Road were later temporarily used as a girls' school (Surrey County Council, Pelham County Secondary Girls School) and then a Middle School (London Borough of Merton, Pelham Middle School, until 1974), buildings subsequently demolished to be replaced by a mix of retirement and warden-assisted flats.

The 1957 school buildings are arranged around three sides of a quadrangle. To the north is a four-storey main entrance block (which contained the school library on the top floor, and a CCF rifle range in the roof space) and a three-storey central block of general purpose classrooms facing Watery Lane. To the west is a two-storey science block and to the east a two-storey block containing the canteen on the ground floor and the school hall on the first floor. Attached to the rear of the east block is the school gym. Also in the middle of the two buildings is a maths block on the second floor.

Among the existing school buildings is one which has ties to John Innes. The "Manor House" adjacent to the school entrance on Watery Lane was Innes's home; a blue plaque records his association. The Manor House was used as the staff room and headmaster's office on the ground floor, and sixth form rooms on the first floor.

Now demolished were school buildings next to the playing field; these were once the library and offices of the John Innes Institution and had ranges of greenhouses attached. In the 1950s and early 1960s these old buildings were used by the first and second year classes (known as forms 2A, 2B, 2C, 3A, 3B, 3C and 3D, alternating each year with either a three or four form intake) and the long greenhouse was used as a lunchtime canteen and a cloakroom. Later, in the 1980s, they were art and music rooms. A little-known feature of the old building was a warren of hidden crawlspace passages, accessible from the second floor music room, from where clandestine spying operations on other classes could be undertaken.

In the 1970s, part of the roof-space housed the 4 mm scale model railway layout. To the southeast aspect of the buildings was the Croquet Lawn, elegantly laid on a slope comparable to that of Yeovil Town Football Club, a small allotment area for the Gardening Club adjoined as well. There was also a pair of 'Fives' courts (Fives is a game like squash, but played with the hands not rackets). As part of the CCF, during the 1950s, 60s and 70s the school also had a bungie launched glider.

A number of additional buildings have been constructed over the years to supplement the facilities of the 1950s buildings.

Following the education reforms of the late 1960s, the school became a comprehensive although it retained many of its grammar school traditions long after the conversion - school houses (named after ancient warrior nations or groups), uniforms with house and school colours, a Combined Cadet Force, and prefects. For many years the school maintained a croquet lawn for the use of the headmaster and the prefects. The school also operated an exchange programme with Eton College for a number of years.

In the 1970s the education system in Merton was altered to use a three-tier structure (primary, middle and high school) in place of the former two-tier structure and Rutlish lost the first three of its years. The school still retained the old year names; however, so that pupils starting at the school began as "fourth" years. The following years were named "remove", "fifth", "transitus" and "sixth" (actually a pupil's fifth year at the school if he remained that long). Transitus and sixth-form pupils had their own common room on the first floor of the main block.

For most of the school's history, the pupils of the school have been assigned to houses. Although discontinued for some years, the system was reinstated in January 2010 with eight houses: [6]

Various inter-house competitions, often of a sporting nature, are held.

Since 1906 the Old Rutlishians' Association ("Old Ruts"), with a large ground and clubhouse in Poplar Road, Merton Park, has existed as an Old Boys sports and social club linked to the school which former pupils of the school are eligible to join. With the loss of the sixth forms the number of former pupils joining the association fell and membership has been opened to all-comers.

Two Old Rutlishians have been awarded the Victoria Cross. [8] [9]

Cardonald is an outlying suburb of the Scottish city of Glasgow. Formerly a village in its own right, it lies to the southwest of the city and is bounded to the south by the White Cart Water. The area was part of Renfrewshire until 1926 when the villages of Cardonald, Crookston, Halfway and their surrounding farmland were annexed to Glasgow.

Morden is a district and town in south London, England, within the London Borough of Merton. It adjoins Merton Park and Wimbledon to the north, Mitcham to the east, Sutton to the south and Worcester Park to the west, and is around 8 miles (13 km) south-southwest of Charing Cross. Prior to the creation of Greater London in 1965, Morden was in the administrative county of Surrey. 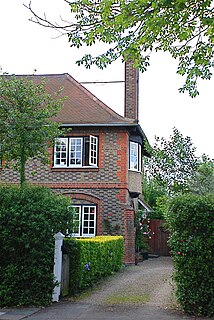 Merton Park is a suburb in the London Borough of Merton. It is situated between Wimbledon, Morden, South Wimbledon and Wimbledon Chase. It is 7.3 miles (11.7 km) southwest of Charing Cross. The area is part of the historic parish of Merton in Surrey. 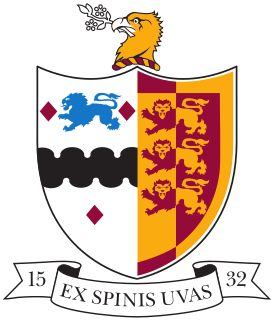 Bristol Grammar School (BGS) is a 4–18 mixed, independent day school in Bristol, England. It was founded in 1532 by Royal Charter for the teaching of 'good manners and literature', endowed by wealthy Bristol merchants Robert and Nicholas Thorne. The school flourished in the early 20th century under headmaster Sir Cyril Norwood (1906–1916), embodying "the ideals and experiences of a leading public school". Norwood went on to serve as the master at Marlborough College and Harrow, and as president of St John's College, Oxford.

Bournemouth School is a boys' grammar school and co-educational sixth form in Charminster, Bournemouth, Dorset, England, for children aged 11 to 18.

St. Bartholomew's School is a co-educational state funded academy school founded in 1466 in Newbury, Berkshire in the United Kingdom. It accepts students aged 11–18 and has approximately 1,700 students on roll, including a sixth form of around 400. St. Bartholomew's is thought to be the 42nd oldest school in the UK still in existence.

Merton is a village and civil parish near the River Ray, about 4 miles (6.4 km) south of Bicester in Oxfordshire, England. The 2011 Census recorded the parish's population as 424.

Priory School is a British co-educational secondary school for 11- to 16-year-olds located on Mountfield Road in the East Sussex town of Lewes. It received widespread public attention in 2019 over its policy of forcing girls to wear trousers.

Ashby School, formerly known as Ashby Grammar School, is a co-educational day and boys' boarding Leicestershire 14-19 upper school with academy status in Ashby-de-la-Zouch, Leicestershire, England. The school is situated in the centre of Ashby on two sites.

John Innes JP was a British property developer and philanthropist. From the 1860s he developed Merton Park as a garden suburb in Merton, Surrey. In his will, he left funds and part of his estate at Merton for the establishment of a horticultural institute. This institute, the John Innes Centre, continues to bear his name today.

Ricards Lodge High School is a single sex comprehensive secondary school for girls aged 11 to 16, located on Lake Road in Wimbledon, London. The school's headteacher has been Alison Jerrard since 2005. It was judged as an Outstanding school by Ofsted in November 2017.

Llanrug is a large village and community in Gwynedd, north-west Wales. It lies about 4 miles (6.4 km) to the east of Caernarfon, 7 miles (11 km) south of Bangor and 3 miles (4.8 km) northwest of Llanberis. It is the largest populated village in the Arfon area of Gwynedd, Wales. The old name of the village was Llanfihangel-y-Rug, derived from Eglwys Sant Mihangel situated about half a mile west of the village. It has a Welsh-speaking community of approximately 88%, the highest in Wales and a population of 2,911.