SATB is an initialism that describes the scoring of compositions for choirs, and also choirs (or consorts) of instruments. The initials are for the voice types: S for soprano, A for alto, T for tenor and B for bass.

Four-part harmony using soprano, alto, tenor and bass is a common scoring in classical music, [1] [2] [3] [4] including chorales and most Bach cantatas. [5]

The letters of the abbreviation are also used by publishers to describe different scorings for soloists and choirs other than four-part harmony. For example, the listing "STB solos, SATB choir", of Bach's Wachet auf, ruft uns die Stimme, BWV 140, indicates that a performance needs three soloists: soprano, tenor and bass, and a four-part choir. [5] "SATB/SATB" is used when a double choir is required, as in Penderecki's Polish Requiem . [6] or SSATB, with divided sopranos, which is a typical scoring in English church music. [5] : 322  [7] A listing for Bach's Mass in B minor includes the maximum of SSATB soloists and SSAATTBB eight-part choir, and also indicates that it contains choral movements for SATB, SSATB, SSATBB and SATB/SATB, as well as arias for individual soloists, and duets for SS, ST and SA. [5] : 299

Other letters of abbreviation, however with less consistency, have been used by publishers, such as "Tr" for treble (boy soprano), "Mz" for mezzo-soprano, [8] "Ba", "Bar" or "Bari" for baritone, "C" for both canto (the highest part) and contralto, and "Ct" for countertenor. [9] "SATB div." indicates that part are sometimes divided (divisi) during a piece, often sharing the same staff.

When soprano and alto are notated in one staff, all stems for soprano go up, and all for alto go down. Similarly, when tenor and bass are notated in one staff, the upper voice is marked by stems up, and both voices written in bass clef, while tenor is usually written in treble clef marked an octave down if it has its own staff. [10] [11] [12] [13]

The rules of voice leading apply to SATB notations. [11]

In a broader sense, choirs of instruments can also be described by the abbreviation SATB, often for members of the same family of instruments, such as consorts of recorders, [14] viola da gamba, [15] saxophones [lower-alpha 1] [16] [17] and trombones. [18] The abbreviations are also a common way to describe which "voices" perform in instrumental compositions such as fugues, including Bach's The Art of Fugue and The Musical Offering , written without indication of specific instruments.

Patrick Hawes is a British composer, conductor, organist and pianist.

James B. Furman was an American composer and college professor.

The listing shows recordings of the Mass in B minor, BWV 232, by Johann Sebastian Bach. The selection is taken from the 281 recordings listed on the Bach Cantatas Website as of 2018, beginning with the first recording by a symphony orchestra and choir to match, conducted by Albert Coates. Beginning in the late 1960s, historically informed performances paved the way for recordings with smaller groups, boys choirs and ensembles playing period instruments, and eventually to recordings using the one-voice-on-a-vocal-part scoring first argued for by Joshua Rifkin in 1982.

Utrecht Te Deum and Jubilate is the common name for a sacred choral composition in two parts, written by George Frideric Handel to celebrate the Treaty of Utrecht, which established the Peace of Utrecht in 1713, ending the War of the Spanish Succession. He composed a Te Deum, HWV 278, and a Jubilate Deo, HWV 279. The combination of the two texts in English follows earlier models. The official premiere of the work was on 13 July 1713 in a service in St Paul's Cathedral in London. 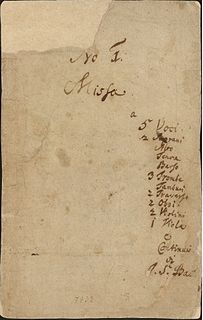 The Mass in B minor is Johann Sebastian Bach's only setting of the complete Latin text of the Ordinarium missae. Towards the end of his life, mainly in 1748 and 1749, he finished composing new sections and compiling it into a complex, unified structure.

The Mass No. 3 in B-flat major, D 324, is a mass composed by Franz Schubert in 1815. It is written for four soloists, a four-part choir and orchestra. While by length it could be a missa brevis, its large orchestral force with trumpets, timpani and woodwinds has also led to its classification as a missa solemnis. 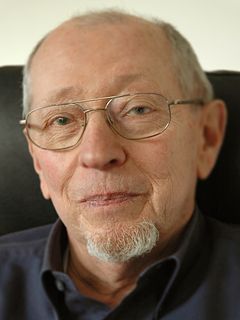 Scott Gendel is an American composer, pianist, and vocal coach. Gendel is known mostly for his art songs and choral music, but has also written numerous operas and musical theatre works, as well as orchestral and chamber music.