Scott Richard Donie (born October 10, 1968 in Vicenza, Italy) is an American diver. He earned the silver medal in the 1992 Summer Olympics on the 10 m platform, and placed 4th in the 3 m springboard at the 1996 Summer Olympics in Atlanta.

Donie has lived and trained in New Jersey and Texas. He also lived and trained in Fort Lauderdale, Florida in 1992. He is a six-time Age Group National Diving Champion and a two-time National Senior Champion. He received a Bachelor's degree from Southern Methodist University in 1990. Donie is an eleven-time Southwest Conference Diving Champion and a three-time National NCAA Division I Champion. He was a member of the US National Diving team from 1985 through 1996.

Fu Mingxia is a retired Chinese female diver, multiple Olympic gold medalist and world champion. She won the platform-diving world championship in 1991 at the age of 12, making her the youngest diving champ of all time. She is also famous for being one of the youngest Olympic diving champions, having earned a gold at the 1992 Barcelona Games when she was just 13 years and 345 days old. Throughout the 1990s, Fu dominated the sport with her repertoire of extremely difficult dives. During the 2000 Sydney Olympics, Fu won her fourth gold medal, joining Americans Pat McCormick and Greg Louganis as the world's only quadruple Olympic-diving champions.

Denis Alekseyevich Petrov is a Russian former pair skater who competed for the Soviet Union, the Commonwealth of Independent States, and the Unified Team. With his then-wife Elena Bechke, he is the 1992 Olympic silver medalist, the 1989 World bronze medalist, a two-time European silver medalist (1991–92), 1992 Soviet national champion.

Jon C. Olsen is an American former competition swimmer, four-time Olympic champion, and former world record-holder. Olsen was a successful relay swimmer for the U.S. national team in the late 1980s and 1990s. He has won a total of 27 medals in major international competition, 20 gold, 5 silver, and 2 bronze spanning the Olympics, the World, Pan Pacific, and the Pan American championships.

Cristina Teuscher is an American former freestyle and medley swimmer who was a member of the U.S. women's relay team that won the gold medal in the 4×200-meter freestyle at the 1996 Summer Olympics in Atlanta, Georgia. Her winning teammates were Jenny Thompson, Trina Jackson and Sheila Taormina. Four years later, while captain of the U.S. women's team, she captured the bronze medal in the 200-meter individual medley at the 2000 Summer Olympics in Sydney, Australia.

Mika'il Sankofa is a world recognized sabre fencer and coach. He competed in the individual and team sabre events at the 1984, 1988 and 1992 Summer Olympics.

Maxine Joyce "Micki" King is an American former competitive diver and diving coach. She was a gold medal winner at the 1972 Summer Olympics in the three meter springboard event. 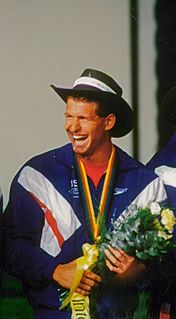 Michele Anne Mitchell is a former diver from the United States. She is a two-time Olympic medalist on the 10-meter platform, winning silver in 1984 and 1988. In 1988 she was inducted into the University of Arizona Athletic Hall of Fame and the International Swimming Hall of Fame in 1995. Formerly the longtime diving coach at UA, she is the director of operations for the swimming and diving teams.

The Bay State Games are an Olympic-style athletic event for amateur athletes in the state of Massachusetts, which includes several divisions and allows athletes of all ages to compete. The Games are divided into Summer and Winter Games. The Summer Games include 25 sports and are usually held in late July. The Winter Games include three different sports and are usually held in late January or early February. The Bay State Games is a member of the National Congress of State Games. Kevin Cummings currently serves as executive director.

Daniel Ketchum is an American former swimmer and Olympic gold medalist. At the 2004 Summer Olympics in Athens, Greece, Ketchum earned a gold medal by swimming for the winning U.S. team in the men's 4×200-meter freestyle relay.

Arthur Byron MacDonald is an American Canadian swimming coach who helms the Toronto Varsity Blues swim teams at the University of Toronto. He is a former swimmer who competed for Canada in the 1972 Summer Olympics in Munich, Germany. MacDonald placed sixth in the final of the men's 100-metre butterfly, and also competed in the preliminary heats of the 200-metre butterfly, but did not advance. He's currently the head coach of the Toronto Titans for the International Swimming League.

Mitchell Ivey is a former American international swimmer who was a backstroke specialist and Olympic medalist. Ivey later became a prominent Olympic and college swimming coach.