South Downs is a 2011 play by the British playwright and author David Hare. It is set in 1962 in a public school, similar to Hare's own school, Lancing, in the South Downs. [1] It is a response to Terence Rattigan's 1948 play The Browning Version and was commissioned by Rattigan's estate to mark Rattigan's Centenary.

It premiered alongside a revival of Rattigan's The Browning Version from 2 September to 8 October 2011 at the Minerva Theatre, Chichester (the small auditorium of the Chichester Festival Theatre). The two plays were directed separately by Jeremy Herrin (South Downs) and Angus Jackson (The Browning Version).

The plays re-opened after a sell-out run at Chichester, at the Harold Pinter Theatre, London, on 24 April 2012 for three-months. [2]

A radio version was produced for BBC Radio 4, broadcast on 1 September 2012. It was also directed by Jeremy Herrin, produced by Catherine Bailey, and performed by the original cast members. [3] 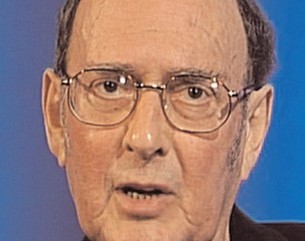 Sir Terence Mervyn Rattigan was a British dramatist and screenwriter. His plays are typically set in an upper-middle-class background. He wrote The Winslow Boy (1946), The Browning Version (1948), The Deep Blue Sea (1952) and Separate Tables (1954), among many others. 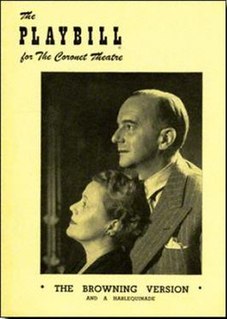 The Browning Version is a play by Terence Rattigan, seen by many as his best work, and first performed on 8 September 1948 at the Phoenix Theatre, London. It was originally one of two short plays, jointly titled "Playbill"; the companion piece being Harlequinade, which forms the second half of the evening. The Browning Version is set in a boys' public school and the Classics teacher in the play, Crocker-Harris, is believed to have been based on Rattigan's Classics tutor at Harrow School, J.W. Coke Norris (1874–1961).

The Deep Blue Sea is a British stage play by Terence Rattigan from 1952. Rattigan based his story and characters in part on his secret relationship with Kenny Morgan, and the aftermath of the end of their relationship. The play was first performed in London on 6 March 1952, directed by Frith Banbury, and won praise for actress Peggy Ashcroft, who co-starred with Kenneth More. In the US, the Plymouth Theater staged the play in October 1952, with Margaret Sullavan. The play with Sullavan subsequently transferred to Broadway, with its Broadway premiere on 5 November 1953, and running for 132 performances.

John Simm is an English actor, director, and musician. He is best known for playing Sam Tyler in Life on Mars, The Master in Doctor Who, and most recently DS Roy Grace in Grace. His other television credits include State of Play, The Lakes, Crime and Punishment, Exile, Prey, and Cracker. His film roles include Wonderland, Everyday, Boston Kickout, Human Traffic and 24 Hour Party People. He has twice been nominated for the BAFTA Award for Best Actor and the Laurence Olivier Award for Best Actor.

Mark Umbers is an English theatre, film and television actor.

Bibliography for Harold Pinter is a list of selected published primary works, productions, secondary sources, and other resources related to English playwright Harold Pinter (1930–2008), the 2005 Nobel Laureate in Literature, who was also a screenwriter, actor, director, poet, author, and political activist. It lists works by and works about him, and it serves as the Bibliography for the main article on Harold Pinter and for several articles relating to him and his works. 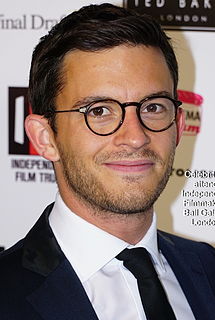 Jonathan Stuart Bailey is an English actor. Known for his comedic and dramatic roles on stage and screen, he is the recipient of a Laurence Olivier Award as well as nominations for Evening Standard Theatre and Screen Actor Guild Awards.

Jeremy Herrin is an English theatre director. He is the artistic director of Headlong Theatre. 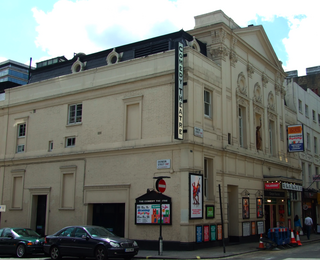 Alexander Jonathan Lawther is an English actor. He made his professional acting debut originating the role of John Blakemore in Sir David Hare's South Downs in the West End. He made his feature film debut playing a young Alan Turing in the Academy Award-winning film The Imitation Game (2014), for which he received the London Film Critics' Circle Award for "Young British Performer of the Year" and was declared one of BAFTA's 2015 Breakthrough Brits.