St. Michael's is a Jesuit church in Munich, southern Germany, the largest Renaissance church north of the Alps. The style of the building had an enormous influence on Southern German early Baroque architecture.

In 1556, Albert V, Duke of Bavaria granted the Society of Jesus (Jesuits) permission to establish what is now Wilhelmsgymnasium in Munich, thus establishing the order's presence in the city. The collegiate church was only established during the reign of his son William V, Duke of Bavaria, also known as "the Pious". who was a supporter of the Jesuits' Counter Reformation tenets.

The church was finally consecrated in 1597, after fourteen years of construction. When the Jesuits were suppressed and banned from most Catholic territories in Europe, the church came into possession of the Bavarian Royal Family and eventually the State of Bavaria, when Germany became a republic. [2]

The church was built by William V, Duke of Bavaria between 1583–97 as a spiritual center for the Counter Reformation. [3] The foundation stone was laid in 1585. [4]

In order to realise his ambitious plans for the church and the adjoining college, Duke William had 87 houses in the best location pulled down, ignoring the protests of the citizens. [3] The church was erected in two stages. In the first stage (1583–88), the church was built by the model of Il Gesù in Rome and given a barrel-vaulted roof by an unknown architect, the vault being the largest in the world apart from that of St Peter's Basilica in Rome, spanning freely more than 20 meters.

When the church was built, there were doubts about the stability of the vaulting. But it was the tower that collapsed in 1590, destroying the just completed quire. [4] Duke William V took it as a bad omen and so planned to build a much larger church. The second phase of construction continued until the consecration of the church in 1597. [4] Friedrich Sustris built on to the undamaged nave a new quire and a transept and a magnificent facade. The church is 78.2 meters long, 20.3 meters wide and 28.2 meters high. [3]

The facade is impressive and contains standing statues of Duke Wilhelm and earlier rulers of the Bavarian Wittelsbach dynasty, cast in bronze, in the form of a family tree. [3] Hubert Gerhard's large bronze statue between the two entrances shows the Archangel Michael fighting for the Faith and killing the Evil in the shape of a humanoid demon.

The interior is a representation of the triumph of Roman Catholicism in Bavaria during the Counter-Reformation. The heavily indented chancel arch as well as the short side aisles and even the side chapels are designed as a triumphal arch to ancient model. A very deep choir room adjoins the mighty nave. The stucco decoration of the nave represents the life of Jesus Christ. The altarpiece "Annunciation" was created by Peter Candid (1587). The sculpture of the holy angel in the nave from Hubert Gerhard (1595) was originally intended for the tomb of William V, which was not completed.

Having suffered severe damage during the Second World War, the church was restored in 1946–48. Finally, between 1980 and 1983, the stucco-work was restored. The spire which lost its steepletop in World War II is situated further north next to the former convent.

The church crypt contains the tomb of Eugène de Beauharnais. A monument was erected by Bertel Thorwaldsen in 1830 in the church. Eugène was the son of Josephine de Beauharnais, Napoleon's wife and her first husband, general Alexandre de Beauharnais. He married a daughter of King Maximilian I Joseph of Bavaria in 1806 and was created Duke of Leuchtenberg in 1817. In the right transept, there is a cross monument of Giovanni da Bologna.

The crypt contains among others the tombs of these members of the Wittelsbach dynasty:

The history of Bavaria stretches from its earliest settlement and its formation as a stem duchy in the 6th century through its inclusion in the Holy Roman Empire to its status as an independent kingdom and finally as a large Bundesland (state) of the Federal Republic of Germany. Originally settled by Celtic peoples such as the Boii, by the 1st century BC it was eventually conquered and incorporated into the Roman Empire as the provinces of Raetia and Noricum. 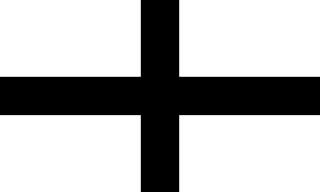 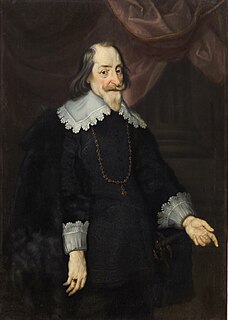 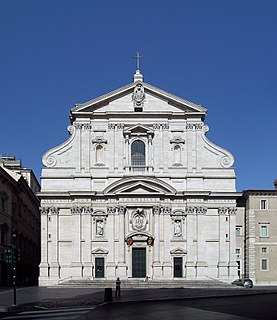 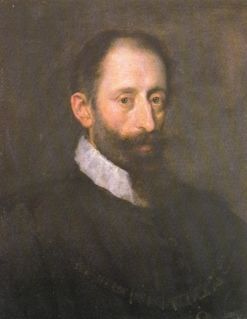 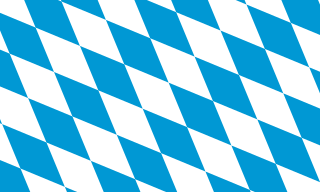 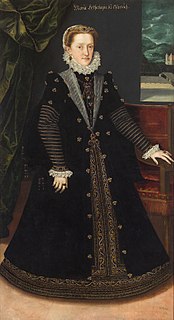 Albert V was Duke of Bavaria from 1550 until his death. He was born in Munich to William IV and Maria Jacobäa of Baden.

The Frauenkirche is a church in Munich, Bavaria, Germany, that serves as the cathedral of the Archdiocese of Munich and Freising and seat of its Archbishop. It is a landmark and is considered a symbol of the Bavarian capital city. Although called "Münchner Dom" on its website and URL, the church is referred to as "Frauenkirche" by locals.

The Theatine Church of St. Cajetan is a Catholic church in Munich, southern Germany. Built from 1663 to 1690, it was founded by Elector Ferdinand Maria and his wife, Henriette Adelaide of Savoy, as a gesture of thanks for the birth of the long-awaited heir to the Bavarian crown, Prince Max Emanuel, in 1662. Now administered by the Dominican Friars, it is also known as the Dominican Priory of St. Cajetan. 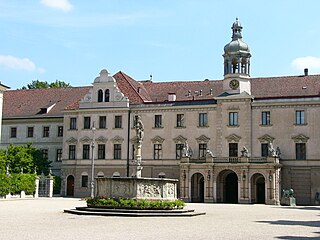 St. Emmeram's Abbey, now known as Schloss Thurn und Taxis, Schloss St. Emmeram, and St. Emmeram's Basilica, was a Benedictine monastery founded in about 739 in Regensburg in Bavaria at the grave of the itinerant Frankish bishop Saint Emmeram. 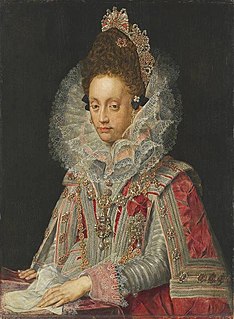 Magdalene of Bavaria was a princess member of the House of Wittelsbach by birth and Countess Palatine of Neuburg and Duchess of Jülich-Berg by marriage. 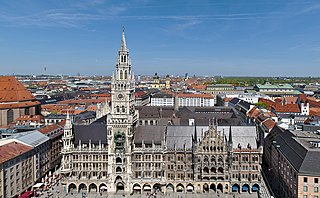 The New Town Hall is a town hall at the northern part of Marienplatz in Munich, Bavaria, Germany. It hosts the city government including the city council, offices of the mayors and a small portion part of the administration. In 1874 the municipality had left the Old Town Hall for its new domicile.

The Old Academy , also called Wilhelminum, is a building in the center of Munich, Germany. Dating from the 16th century, it has a Renaissance facade and four inner courtyards.

Hubert Gerhards was a Dutch sculptor. Like many of his contemporaries, he may have left the Netherlands in order to escape the religious conflicts and iconoclasm of the 1566–1567 era. He trained in Florence in the circle of Giambologna, who heavily influenced his style. Gerhard's dominant subject-matter, characteristic of many Northern Mannerist artists, was the mythological gods of antiquity. 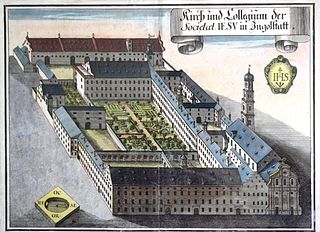 The Jesuit College of Ingolstadt was a Jesuit school in Ingolstadt, in the Duchy and Electorate of Bavaria, founded in 1556, that operated until the suppression of the Jesuit Order in 1773. The college was the headquarters of the Jesuits in Germany, and became a center of the Counter-Reformation. Many of its members taught at the University of Ingolstadt.