St Columba's College is a co-educational independent day and boarding school founded in 1843 located in Whitechurch, County Dublin, Ireland. Among the founders of the college were Viscount Adare (who later became The 3rd Earl of Dunraven and Mount-Earl in 1850), William Monsell (who was later created The 1st Baron Emly in 1874), Dr William Sewell and James Henthorn Todd. [1]

The school is affiliated with the Church of Ireland and caters to 300+ pupils, aged 11 to 19. Alumni are organized in the Old Columban Society. Its campus consists of 140 acres (0.6 km2) on the edge of Dublin and the M50 motorway.

The school has grown up around a series of quadrangles, and major developments since the 1993 150th anniversary have provided it with many modern facilities. In 2004 it opened the Grange Building, housing over 100 boarders, as well as classrooms and house staff accommodation. In 2006, the 19th century Argyle buildings in the heart of the College were refurbished.

The school was originally established at Stackallan House in County Meath in 1843 but moved to its current location at Whitechurch, County Dublin in 1849. [5]

St Columba's operates a house system. Each pupil is placed in one of seven houses; Stackallan, Glen or Gwynn for all boys Form II to VI; Hollypark or Iona for all girls; Beresford for junior girls; Tibradden for boys under 13. The size of house ranges from 20 to 65 pupils. A Housemaster or Housemistress, assisted by at least one resident House Tutor, is in charge of each house, and acts in loco parentis in every aspect of the children's welfare throughout their time at the college.

Tibradden and Beresford occupy separate buildings in the centre of the college. Like the senior houses each has its own living and sleeping quarters and routine. Older boys and girls, selected by the house staff, help to provide an existence more structured and more protected than that of the rest of the school.

The school year is divided into three terms of which the first, the Michaelmas Term (September to December) is the longest. The Hilary Term is from January to March. The third is the Trinity Term, from April to June, and this is when external public examinations are taken. The Michaelmas Term has a substantial holiday at half-term, when the college closes down.

There are also shorter half-term breaks in the other terms, including following the St Columba's Day celebrations in late May or early June. Each term there is a three- or four-day Exodus during which the college closes; most pupils from outside of Ireland stay with their guardians, or Irish school friends.

Founded in 1909, the Old Columban Society is the alumni organization of the college. The first president of the society was Acting-Warden R M Gwynn supported by OCs W.F.S. Bantry White and Cecil L. Smith. It keeps members in touch with each other and the college and has also published books about the history of the college. The school magazine TheColumban was first published in 1879. During the First World War it denounced the Easter Rising. Many OCs were officers in the British Army, so that when one of them died the bell in college was rung in commemoration. In 1917, a Treasurer was appointed to oversee editorials and printing.

Each year in May the Old Columban Bulletin is published, containing about 25 pages of news of Old Columbans and the college. Regular dinners and drinks parties are organised, in Dublin, London and Belfast. An Old Columban Scholarship is awarded to children of Old Columbans, who are all entitled to a discount on College fees.

Currently they have over 3,000 members, of whom over 50% live in the Republic of Ireland, 5% in Northern Ireland, 16% in Great Britain, 5% in continental Europe and 7% in the rest of the world. Old Columbans Germany has established a website, and is organizing events for Old Columbans from Germany as well as Old Columbans living in Germany. [4] 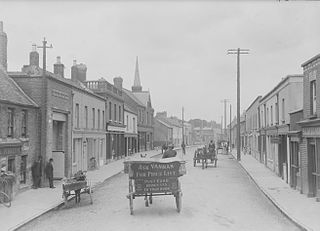 Rathfarnham is a Southside suburb of Dublin, Ireland. It is south of Terenure, east of Templeogue, and is in the postal districts of Dublin 14 and 16. It is within the administrative areas of both Dún Laoghaire–Rathdown County Council and South Dublin County Council.

Whitechurch, is a small suburban area on the south side of Dublin, situated south of Ballyboden, east of Edmondstown and west of Marlay Park. The greater part of the area lies north of the M50 semi-orbital motorway, with some remote parts merging into the mountainous districts of Tibradden and Kilmashogue south of the road, all at the foot of the Dublin mountains. Whitechurch is usually considered to lie within the greater Rathfarnham area. 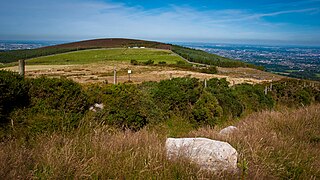 Kilmashogue or Kilmashoge is a mountain in Dún Laoghaire–Rathdown county in Ireland. It is 408 metres high and forms part of the group of hills in the Dublin Mountains which comprises Two Rock, Three Rock, Kilmashogue and Tibradden Mountains. The forest plantation on its northern slope, which is composed mainly of Sitka spruce, Scots pine and beech, is a habitat for Sika deer, hares, rabbits and foxes. A number of prehistoric monuments can be found on the slopes of the mountain.

Trinity term is the third and final term of the academic year at the University of Oxford, the University of Dublin, Canterbury Christ Church University, and some independent schools in the United Kingdom. It runs from about mid-April to about the end of June and is named after Trinity Sunday, which falls eight weeks after Easter, in May or June.

Adomnán or Adamnán of Iona, also known as Eunan, was an abbot of Iona Abbey (r. 679–704), hagiographer, statesman, canon jurist, and saint. He was the author of the Life of Columba, probably written between 697 and 700. This biography is by far the most important surviving work written in early-medieval Scotland, and is a vital source for our knowledge of the Picts, and an insight into the life of Iona and the early-medieval Gaelic monk. 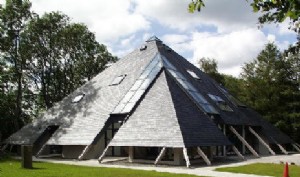 Larch Hill International Scout and Guide Centre is the national campsite, and administrative and training headquarters of Scouting Ireland. It was previously owned by Scouting Ireland (CSI). 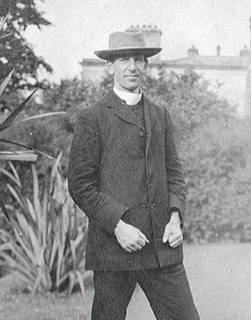 Rev Robert Malcolm Gwynn was a Church of Ireland clergyman and academic whose entire working life was spent at Trinity College Dublin. In his youth he was also an outstanding cricketer. 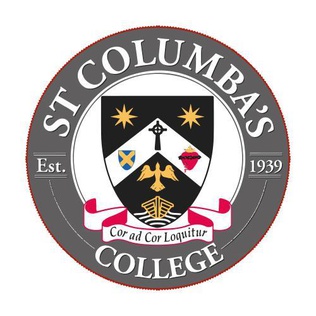 St Columba's College is a co-educational 4–18 independent, Catholic day school and sixth form in St Albans, Hertfordshire, England. It was founded in 1939 by Phillip O’Neil and taken over by the Brothers of the Sacred Heart in 1955. It is a member of the Headmasters' and Headmistresses' Conference. 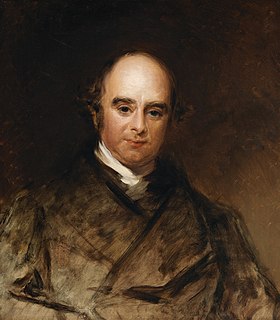 James Henthorn Todd was a biblical scholar, educator, and Irish historian. He is noted for his efforts to place religious disagreements on a rational historical footing, for his advocacy of a liberal form of Protestantism, and for his endeavors as an educator, librarian, and scholar in Irish history.

Kilkenny College is an independent Church of Ireland co-educational day and boarding secondary school located in Kilkenny, in the South-East of Ireland. It is the largest co-educational boarding school in Ireland. The school's students are mainly Protestant, although it is open to other denominations. 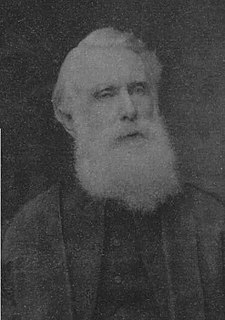 John Gwynn was an Irish Syriacist. He was Regius Professor of Divinity at Trinity College, Dublin from 1888 to 1907. 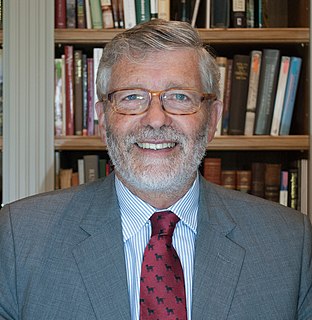 Manresa House is a retreat centre run by the Society of Jesus in the Dollymount area of Clontarf in Dublin, near Saint Anne's Park. In the 19th century it was home to Robert Warren and Arthur Guinness, and it is a protected structure. 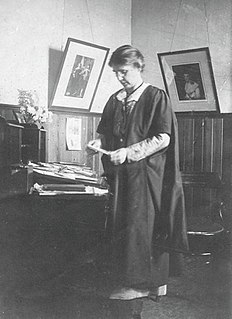