Studenternas IP is a multi-use stadium in Uppsala, Sweden and the home arena for the football clubs IK Sirius Fotboll [1] and Dalkurd FF on the men's side and IK Uppsala Fotboll on the women's and in bandy for IK Sirius in Elitserien and several other bandy teams. [2] It was inaugurated on 21 March 1909. [3]

Bälinge IF is a sports club from Bälinge, 10 kilometres north-west of Uppsala, Sweden.

IK Sirius is a Swedish bandy club located in Uppsala, currently playing in Elitserien. IK Sirius were formed in 1907 and play their home games at Studenternas Idrottsplats.

The Bandy World Championship 2009 was held between 18 and 25 January in Västerås, Sweden. Men's teams from 13 countries participated in the 2009 competition: Belarus, Finland, Kazakhstan, Norway, Russia, Sweden and Canada, Estonia, Hungary, Latvia, Mongolia, the Netherlands and the United States. Belarus retained their place in group A by beating the United States in a play off in the previous tournament held in 2008. 44 games were played. 4 out of these were played on other sites than Västerås. Games were played in Solna, Stockholm, Eskilstuna and Uppsala. The main venues were ABB Arena Syd in Västerås, Sweden's largest indoor arena for bandy, and Hakonplan, an outdoor stadium. These two arenas are placed on the same recreation area in Västerås, Rocklunda sports park. The time in Västerås is UTC+1. 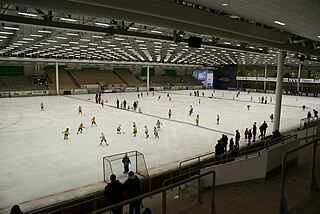 Svenska Cupen 1969–70 was the fifteenth season of the main Swedish football Cup. The competition was concluded on 28 May 1970 with the final, held at Studenternas IP, Uppsala. Åtvidabergs FF won 2-0 against Sandvikens IF before an attendance of 3,110 spectators. 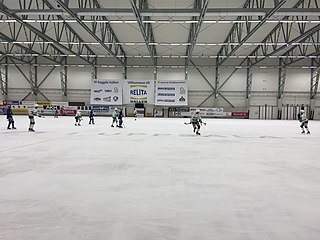 Recoverhallen is an indoor bandy venue in Uppsala, Sweden, opened on 11 September 2011 with the game IK Sirius–Yenisey Krasnoyarsk 5–4.

The 2017–18 Elitserien is the eleventh season of the present highest Swedish men's bandy top division, Elitserien. The regular season begins in late-October 2017.

IK Uppsala Fotboll is a football club from Uppsala, in Uppsala County, Sweden. The club was established in 2016 when IK Sirius Fotboll's women's section decided to reform as an independent club. It was promoted into the women's Premier Division (Damallsvenskan) for the first time in 2019.

The 2020 Superettan is part of the 2020 Swedish football season, and the 20th season of Superettan, Sweden's second-tier football division in its current format. A total of 16 teams contest the league.