Superman is a 1987 Indian Hindi-language superhero film produced and directed by B. Gupta. [1] The film stars Dharmendra, Puneet Issar, Sonia Sahni and Ranjeeta Kaur. Puneet Issar plays the role of Superman. [2] [3] It was an unofficial remake of Superman. [4]

Sharafat is a 1970 Hindi romantic drama film, directed by Asit Sen, starring Dharmendra, Hema Malini, Ashok Kumar, Sonia Sahni and Jagdeep. Hema Malini plays the role of a feisty courtesan Chanda in search of her father, in this satire about society's hypocritical moral standards. The screenplay was written by Nabendu Ghosh, while the dialogues were by Hindi satirist Krishan Chander (author of such dark classics of Black Humor & Satire as Ek Gadhe Ki Aatmkatha. 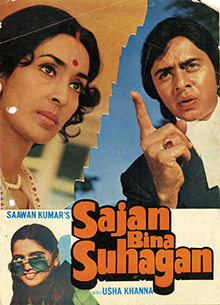 Saajan Bina Suhagan is a 1978 Indian Hindi-language drama film produced and directed by Saawan Kumar Tak. The film stars Rajendra Kumar, Nutan, Vinod Mehra, Padmini Kohlapure and Shreeram Lagoo, the films music is by Usha Khanna. It has a popular song "Madhuban Khushboo Deta Hai" sung by Yesudas, Anuradha Paudwal and Hemlata. The film was remade in Tamil as Mangala Nayagi in 1980 and remade in Malayalam as Oru Kochukatha Aarum Parayathe Katha in 1984

Tahkhana is a 1986 Bollywood horror film directed by Shyam Ramsay and Tulsi Ramsay. It is a tale about two sisters separated at birth and the search for a hidden treasure, which is guarded in a dungeon by a bloodthirsty monster. 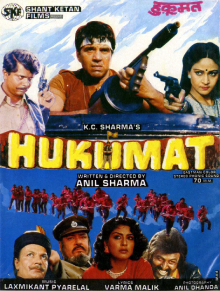 Hukumat is a 1987 Bollywood action film directed by Anil Sharma, starring Dharmendra and Rati Agnihotri in the lead roles, while Swapna and Sadashiv Amrapurkar play supporting roles. The movie became the highest-grossing Bollywood film of 1987 and it became "Super-hit" at box office. It also received highly positive response from critics and audiences alike. Also, Dharmendra gave 8 successful movies in the same year, which still remains a record.

Elaan-E-Jung is a 1989 Bollywood action film directed by Anil Sharma and starring Dharmendra and Jaya Prada The movie was made to re-create the magic of Blockbuster movie Hukumat. The film was a huge success although couldn't match the collections of "Hukumat".The film had Sadashiv Amrapurkar as the main villain.

Humshakal is a 1992 Indian Bollywood action film directed by Kalpataru. It stars Shammi Kapoor, Vinod Khanna and Meenakshi Seshadri in pivotal roles. Film was " Super Hit " at the box office.

Lakhon Ki Baat is a 1984 Indian Bollywood film produced and directed by Basu Chatterjee. It stars Sanjeev Kumar, Farooq Shaikh and Anita Raj in pivotal roles. The movie has the Same plot as in The Fortune Cookie (1966). 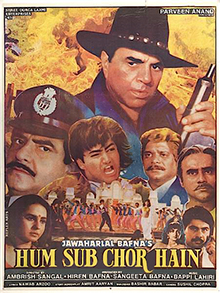 Dadagiri is a 1987 Bollywood film directed by Deepak Shivdasani, starring Dharmendra, Govinda and Padmini Kolhapure. Dadagiri was successful movie of 1987.

Anmol Sitaare is a 1982 Bollywood film. The film was a remake of director's own 1981 Kannada film Prachanda Putanigalu.