Last updated November 27, 2020
Sentence of imprisonment, not to be served, if the offender proves himself during the probation period

A suspended sentence is a legal term for a judge's delaying of a defendant's serving of a sentence after they have been found guilty, in order to allow the defendant to perform a period of probation. If the defendant does not break the law during that period, and fulfils the particular conditions of the probation, the judge usually dismisses the sentence.

In Australia, suspended sentences are commonly imposed in order to alleviate the strain on overcrowded prisons. For example, an individual may be sentenced to a six-month jail term, wholly suspended for six months; if they commit any other offence during that year, the original jail term is immediately applied in addition to any other sentence.

As of 1 September, 2014, suspended sentences no longer exist in Victoria, and in its place are community correction orders, which can be for a fixed term to ensure good behaviour. [1]

In the People's Republic of China (excluding Hong Kong and Macau), both suspended sentences and suspended sentencing (Chinese :缓刑, also translated as a sentence "with reprieve") are featured in the criminal law. In the first situation, a fixed-term sentence of three years or below can be suspended. In the second situation, sentencing does not immediately follow the guilty verdict, but instead is determined after a period of probation.

Death sentences can also be suspended (called a "death sentence with reprieve"), so that an offender who does not intentionally re-offend during the two-year suspension period of release would have the sentence commuted to a life sentence.

In the law of the Republic of Ireland, the 2006 law by which a suspended sentence is activated was ruled unconstitutional in 2016. The 2006 law required that a court decision on whether to activate the suspended sentence be made as soon as a later conviction was handed down, even if there was an appeal pending for the later conviction. [3] [4] [5] Subsequent legislation introduced in 2017 corrected the deficiencies identified, introducing an effective appeal mechanism. [6]

Suspended sentences (執行猶予, shikkō yūyo) are common practice in Japan and can be applied in cases where a sentence is for up to 3 years in prison and/or 500,000 yen in fines. Any criminal activity during the period of the suspended sentence will result in the cancellation of the sentence and imprisonment for the prescribed term. [7]

In Russia suspended sentence (Russian : условный срок, lit.  'conditional sentence or probation') is commonplace and its application is stipulated by an Article 73 of the Russian Criminal Code. [8] [9] The suspended sentences may not be applied to child offenders (minors aged 14 or less when the offence was committed), to those who have committed a serious or very serious crime (the definition of which is given by Article 15 of the same Code as of 2019), or in case of crime recurrence. [8] The judge may also impose additional restrictions on how the probation must be served. Initial sentence is enforced in case of convicted failing to fulfill conditions of the probation.

A suspended sentence can be applied if the term of imprisonment is under two years and the offender agrees to comply with court requirements including a curfew, performing unpaid work and rehabilitation. [10] In 2017, 5% of convictions resulted in a suspended sentence, compared to 7% immediate custodial sentences. [11]

In the United States, it is common practice for judges to hand down suspended sentences to first-time offenders who have committed a minor crime, and for prosecutors to recommend suspended sentences as part of a plea bargain. They are often given to mitigate the effect of penalties. [12]

In some jurisdictions, the criminal record of the guilty party will still carry the offense, even after probation is adequately served. [13] In other cases, the process of deferred adjudication prevents the conviction from appearing on a person's criminal record, once probation had been completed. [14]

In the federal system, judges' authority to suspend sentences has been abolished, by the Sentencing Reform Act of 1984, through the United States Sentencing Commission, and upheld by Mistretta v. United States .[ citation needed ]

The Youth Criminal Justice Act is a Canadian statute, which came into effect on April 1, 2003. It covers the prosecution of youths for criminal offences. The Act replaced the Young Offenders Act, which itself was a replacement for the Juvenile Delinquents Act.

The term sentence in law refers to punishment that was actually ordered or could be ordered by a trial court in a criminal procedure. A sentence forms the final explicit act of a judge-ruled process as well as the symbolic principal act connected to their function. The sentence can generally involve a decree of imprisonment, a fine, and/or punishments against a defendant convicted of a crime. Those imprisoned for multiple crimes usually serve a concurrent sentence in which the period of imprisonment equals the length of the longest sentence where the sentences are all served together at the same time, while others serve a consecutive sentence in which the period of imprisonment equals the sum of all the sentences served sequentially, or one after the other. Additional sentences include intermediate, which allows an inmate to be free for about 8 hours a day for work purposes; determinate, which is fixed on a number of days, months, or years; and indeterminate or bifurcated, which mandates the minimum period be served in an institutional setting such as a prison followed by street time period of parole, supervised release or probation until the total sentence is completed.

A hybrid offence, dual offence, Crown option offence, dual procedure offence, offence triable either way, or wobbler is one of the special class offences in the common law jurisdictions where the case may be prosecuted either summarily or as indictment. In the United States, an alternative misdemeanor/felony offense lists both county jail and state prison as possible punishment. Similarly, a wobblette is a crime that can be charged either as a misdemeanor or an infraction, for example, violating health protocols of COVID-19.

A habitual offender, repeat offender, or career criminal is a person convicted of a new crime who was previously convicted of crimes. Various state and jurisdictions may have laws targeting habitual offenders, and specifically providing for enhanced or exemplary punishments or other sanctions. They are designed to counter criminal recidivism by physical incapacitation via imprisonment.

A discharge is a type of sentence imposed by a court whereby no punishment is imposed.

A presentence investigation report (PSIR) is a legal term referring to the investigation into the "legal and social background" of person convicted of a crime before sentencing to determine if there are extenuating circumstances which should lighten the person's sentence or a history of criminal behavior which should increase the severity of the person's sentence. The PSIR is a "critical" document prepared by a probation officer who uses a system of allocating points to fulfill a number of purposes, including serving as a charging document and exhibit proving criminal conduct. It is said to be akin to a magistrate judge's report and recommendation. In hindsight, PSIR is a system that is still widely recognized today in order to give someone a harsher or lesser sentence.

A deferred adjudication, also known in some jurisdictions as an adjournment in contemplation of dismissal (ACOD), probation before judgment (PBJ), or deferred entry of judgment (DEJ), is a form of plea deal available in various jurisdictions, where a defendant pleads "guilty" or "no contest" to criminal charges in exchange for meeting certain requirements laid out by the court within an allotted period of time also ordered by the court. Upon completion of the requirements, which may include probation, treatment, community service, some form of community supervision, or some other diversion program, the defendant may avoid a formal conviction on their record or have their case dismissed. In some cases, an order of non-disclosure can be obtained, and sometimes a record can be expunged. 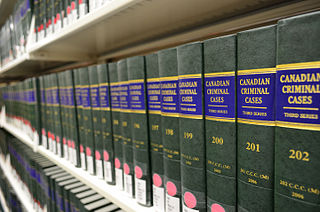 The Code of Criminal Procedure commonly called Criminal Procedure Code (CrPC) is the main legislation on procedure for administration of substantive criminal law in India. It was enacted in 1973 and came into force on 1 April 1974. It provides the machinery for the investigation of crime, apprehension of suspected criminals, collection of evidence, determination of guilt or innocence of the accused person and the determination of punishment of the guilty. It also deals with public nuisance, prevention of offences and maintenance of wife, child and parents.

Sentencing in England and Wales refers to a bench of magistrates or district judge in a magistrate's court or a judge in the Crown Court passing sentence on a person found guilty of a criminal offence. In deciding the sentence, the court will take into account a number of factors: the type of offence and how serious it is, the timing of any plea of guilty, the defendant's character and antecedents, including his/her criminal record and the defendant's personal circumstances such as their financial circumstances in the case of a fine being imposed.

In the Australian legal system, a good behaviour bond is a type of non-custodial sentence which involves the condition of the offender's “good behaviour” for a set period. The condition of “good behaviour” primarily requires the offender to obey the law, but may also include additional probation officer supervision, mandatory medical treatment or participation in rehabilitation, counselling and intervention programs. These imposed conditions are determined by state legislation and at the magistrate's discretion. A good behaviour bond may be established with or without a recorded legal conviction for the offence. The specific conditions which constitute a good behaviour bond, as well as the consequences for breaching them, vary under each Australian state or territory's legislation, but overall are used most commonly for first-time and juvenile offenders.

Lifetime probation is reserved for relatively serious legal offenders. The ultimate purpose of lifetime probation is to examine whether offenders properly maintain good behavior as well as capability of patience under lifetime probation serving circumstance. An offender is required to abide by particular conditions for rest of his or her entire life in order to nurture superior social behaviour as a punishment for their criminal offence. Condition of probation orders contain supervision, electronic tagging, reporting to his or her probation or parole officer, as well as attending counselling. The essential component of lifetime probation carries the sense of being examined for well-being character and behaviour for life term period. Legislative framework regarding probation may vary depending on the country or the state within a certain country as well as the duration and condition of probational sentencing.