In criminal law, the right to a speedy trial is a human right under which it is asserted that a government prosecutor may not delay the trial of a criminal suspect arbitrarily and indefinitely. Otherwise, the power to impose such delays would effectively allow prosecutors to send anyone to jail for an arbitrary length of time without trial.

Although it is important for the protection of speedy trial rights for there to be a court in which a defendant may complain about the unreasonable delay of the trial, it is also important that nations implement structures that avoid the delay. [1]

In jurisdictions with strong rule of law, the requirement of a "speedy trial" forces prosecutors to diligently build cases within a reasonable amount of time commensurate with the complexity and heinousness of the crimes of which suspects are accused. The right is based on the notion that long-term incarceration should normally be restricted to situations in which a judge or jury have determined a suspect has committed a crime.

The right to a speedy trial is codified in fundamental legal documents in several jurisdictions, and may be further defined by statutory law.

Speedy trial rights are recognized within Section Eleven of the Canadian Charter of Rights and Freedoms.

Within Europe, speedy trial rights are recognized by Article 6 of the European Convention on Human Rights.

In English law, this right was developed by the Assize of Clarendon in 1166 (a judge would be summoned if one was not immediately available) and Magna Carta in 1215 ("To no one will we sell, to no one will we refuse or delay, right or justice."). [2]

Right to speedy trial is guaranteed under Article 21 of the Constitution of India. [3]

The Article 37  [ ja ] of the Japanese Constitution states, "In all criminal cases the accused shall enjoy the right to a speedy and public trial by an impartial tribunal." [4] Takada case  [ ja ], which had not held a court for 15 years, was dismissed by Supreme Court of Japan according to Article 37. [5] After the Takada case, it is considered that dismissing judge should only apply if the accused ask acceleration of a trial.

The Constitution of the Philippines states, "All persons shall have the right to a speedy disposition of their cases before all judicial, quasi-judicial, or administrative bodies." [6]

In the United States, basic speedy trial rights are protected by the Speedy Trial Clause of the Sixth Amendment to the United States Constitution. States may also offer additional speedy trial protections. [7] In June 1776, a "speedy trial" provision was explicitly included in the Virginia Declaration of Rights by George Mason, its principal author.

Rentarō Taki was a Japanese pianist and composer of the Meiji era.

The Ōsumi Peninsula projects south from the Japanese island of Kyūshū and includes the southernmost point on the island, Cape Sata. Its east coast lies on the Pacific Ocean, while to the west it faces the Satsuma Peninsula across Kagoshima Bay. Politically it is part of Kagoshima Prefecture. Lava erupted in 1914 by Sakurajima made a land connection with the northwest of the Ōsumi Peninsula.

The Satsuma Peninsula is a peninsula which projects south from the southwest part of Kyūshū Island, Japan. To the west lies the East China Sea, while to the east it faces the Ōsumi Peninsula across Kagoshima Bay. Politically, it belongs to Kagoshima Prefecture, and it includes the prefectural capital, Kagoshima City. Near the southern tip of the peninsula is the 924 metres (3,031 ft) Mount Kaimon (Kaimon-dake) and the hot springs of Ibusuki Onsen.

The Hyūga Nada is the part of the Pacific Ocean that lies off the eastern shore of the island of Kyushu, to the south-west of the island of Honshu, off the south coast of Japan. Its name is derived from the former province of Hyūga, which corresponded to the prefecture of Miyazaki before the Meiji Restoration. Also, earthquakes occur repeatedly in Hyuga Nada. 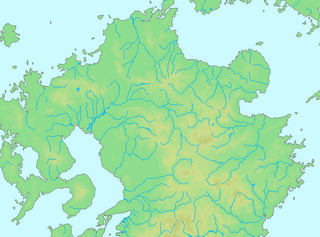 Lèse-majesté in Japan was a special crime of defamation concerning the imperial family that was in effect between 1877 and 1947, mostly in militarized Japan. It is an act of disrespect against the imperial family and affiliated sites like imperial shrines and mausoleums. It first appeared in 1877 in the draft of the Japanese Penal Code. Later, it was stipulated in Articles 74 and 76 as one of the elements of the current Penal Code, Part II, Chapter 1, "Crimes against the Imperial Family," which came into effect in 1908. Here, the scope of the crime was extremely wide and any actions considered the act to be disrespectful was enacted. Therefore, this law forced Japanese people to support the Emperor, Shintoism, and militaristic Japan during World War II. However, after World War II, in accordance with the strong instructions of the Supreme Commander of the Allied Powers, MacArthur, and the spirit of the new constitution, which respects the equality of individuals, "crimes against the imperial family," including Lèse-majesté, were abolished in the 1947 revision of the penal code. Therefore, there is no Lèse-majesté in the current law in Japan. During the Meiji and Taisho periods, the number of people who were suspected of Lèse-majesté averaged less than ten per year, but during World War II, the number increased dramatically, and from 1941 to 1943, the annual average number rose to nearly 160.

Echigo Plain or Niigata Plain is an alluvial plain that extends from central to northern Niigata Prefecture in Japan. The area of the plain is approximately 2000km2. It is the largest rice-growing area in Japan. The plain was formed by the Agano and Shinano rivers. 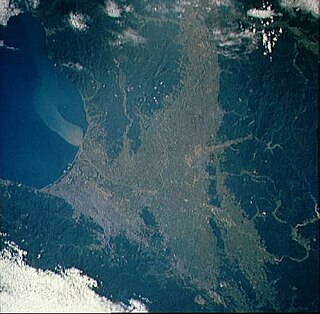 Ishikari Plain is a plain in western Hokkaido. The area of the plain is approximately 3800km2. The central city is Sapporo. Rice cultivation is very popular in the Ishikari Plain. 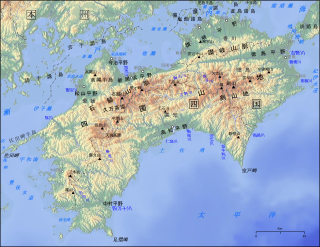 Tosa Bay is a bay north of the line connecting Cape Muroto and Cape Ashizuri in Kochi Prefecture, Japan. Tosa Bay is better fishing grounds in Japan, which is strongly affected by the Kuroshio Current.

Sendai Bay is a bay from the Oshika Peninsula of Miyagi Prefecture to Cape Unoo of Fukushima Prefecture. 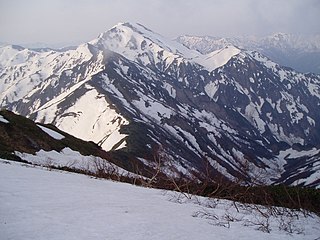 Echigo Mountains is a mountain range that straddles Niigata, Fukushima, and Gunma prefectures in Japan.

Enshū Sea is the sea area from Cape Irōzaki in Shizuoka Prefecture to Cape Daiō in Mie Prefecture. It is also called Tōtōmi Sea or TenryūSea. 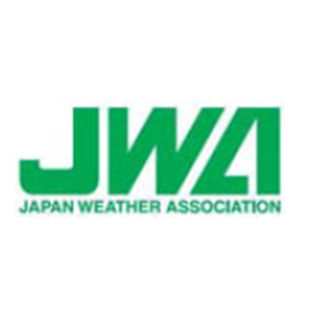 Japan Weather Association is a Japanese general incorporated foundation that conducts meteorological services. It founded in 1950.

The Ane River is a river that flows through the northern part of Shiga Prefecture, Japan, entering Lake Biwa at the city of Nagahama.

The Kanmon Roadway Tunnel carries National Route 2 under the Kanmon Straits. At the time of its construction, it was the longest undersea road in the world. It opened in 1958. The overall length is 3,461 meters, and it is 58 meters below sea level at the deepest point. The endpoints are in Shimonoseki, Yamaguchi and Moji-ku, Kitakyūshū.

Hōgetsu Shimamura was a Japanese critic, novelist and leader of Shingeki. His real name is Takitaro (滝太郎). He was born in Shimane Prefecture. He graduated from Tōkyō Senmon Gakkō. In 1902 he studied abroad in the United Kingdom and Germany. In 1906, he founded the Bungei Kyōkai with Tsubouchi Shoyo. He presided over Waseda Bungaku and was active in the naturalistic literary movement. In 1913, he established the Geijutsu-za theatre troupe with Sumako Matsui. His main works are Shinbijigaku (新美辞学), Kindai Bungei no Kenkyu (近代文芸之研究) and so on.