He studied trumpet in elementary school, and began his professional career playing local gigs with his childhood friend, the legendary guitarist Sonny Sharrock. Daniel briefly attended Berklee School of Music and Southern Illinois University, before joining the army. In 1966, Daniel was drafted in the army, and served with the 9th and 25th Infantry Division Bands in the Mekong Delta of Vietnam during the Vietnam War. [2] After his discharge from the Army in 1968, Daniel attended Central State College, Ohio, on a full music scholarship, where he met and studied with Dr. Makanda Ken McIntyre. After a year, Daniel returned to New York City and eventually received a bachelor of music degree in theory and composition from the City College of New York. Daniel had begun his recording career while studying in Ohio. He returned briefly to New York to record Sonny Sharrock's first album Black Woman. His second recording was with a band he co-led (Brute Force) with his brother, Richard Daniel. The recording was entitled Brute Force on the Embryo label, produced by Herbie Mann. Since then, Daniel has participated in more than 30 published recordings with such artists as: Archie Shepp, Dewey Redman, Andrew Cyrille, Sam Rivers, Billy Bang and Henry Threadgill.

Ted Daniel has held workshops at Amherst College, Bennington College, Williams College and the University of Hosei in Tokyo, Japan. He has also conducted a seminar in Madrid, Spain, as well as work in his community conducting summer music workshops for high and college age students. Daniel has produced three albums under his own name: The Ted Daniel Sextet on Ujamaa Records, Tapestry on Sun Records, and In The Beginning on Altura recordings. This recording features a twelve-piece ensemble including such artist as Oliver Lake, Arthur Blythe, Charles Tyler and David Murray. Eventually this ensemble evolved into a larger group called "Energy".

Daniel has been the recipient of a NEA compositional grant and awarded "Talent Deserving Wider Recognition" from Downbeat Magazine . Presently, he is writing and performing with his new group, the International Brass and Membrane Corporation (IBMC). This trio was conceived as a flexible and expandable creative music performance group, which utilizes instruments from the brass and membrane instrument families. He has also made several recordings with Charles Compo's "The Phibes" band. On May 20, 2008, Porter Records reissued Ted Daniel's Tapestry album, with a bonus track from the original performance of 1974 recorded at Ornette Coleman's Artist House. Daniel has also formed a duo with Michael Marcus on Bb clarinet and Daniel on trumpet and assorted brass. Their first release self-titled Duology on Boxholder Records received excellent reviews. Duology's second CD on Soul Note Records, entitled Golfen Atoms, was released in June 2008. In May 2009, Ujamaa Records released the Ted Daniel Trio CD The Loft Years), Volume one. 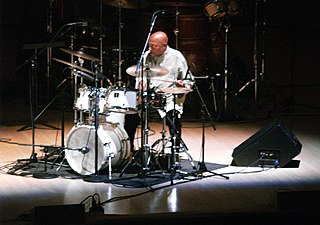 Roy Owen Haynes is an American jazz drummer. He is among the most recorded drummers in jazz. In a career lasting over 70 years he has played swing, bebop, jazz fusion, avant-garde jazz and is considered the father of modern jazz drumming. "Snap Crackle" was a nickname given to him in the 1950s.

Henry Grimes was an American jazz double bassist and violinist.

Material is a musical group formed in 1979 and led by bass guitarist Bill Laswell.

Axiom was a record label founded by musician Bill Laswell in 1990 with the support of Chris Blackwell, founder of Island Records.

Bobby Few is an American jazz pianist and vocalist.

Marge Records or Futura Marge was a jazz record label created in France in 1973 by Gérard Terronès as a continuation of Futura Records. The label changed its name in 2018 into Futura Marge.