Sunday league football is a term used in England, Scotland, Wales and Ireland to describe the association amateur competitions, whose players have less time to devote to football. The term pub league may also be used, owing to the number of public houses that enter teams.

An offensive coordinator is a member of the coaching staff of an American football or Canadian football team who is in charge of the team's offense. Generally, along with the defensive coordinator, he represents the second level of command structure after the head coach.

Joseph Henry Baker was an England international footballer. Born in Woolton in Liverpool, England, he spent virtually his entire childhood growing up in Motherwell, Scotland. He is notable for being the first professional player to have played for England without having previously played in the English football league system, and for scoring over 100 goals in both the English and Scottish leagues. His brother Gerry Baker was also a professional footballer, who played internationally for the United States.

Steven Paul Baker is an Australian rules footballer who played for the St Kilda Football Club in the Australian Football League (AFL) from 1999 to 2011.

Samuel David Baker is a former American football offensive tackle. He played college football for the University of Southern California (USC), and was a three-time All-American. He was selected by the Atlanta Falcons in the first round of the 2008 NFL Draft. 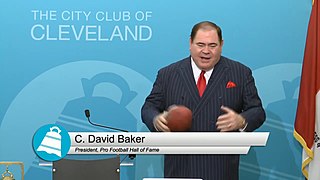 Carl David Baker is the President and CEO of the Pro Football Hall of Fame in Canton, Ohio.

Arthur R. Baker was a collegiate and professional American football player. He played college football at Syracuse University, where he was an All-American fullback in the backfield with Heisman Trophy winner Ernie Davis. He was also an NCAA wrestling champion at Syracuse in 1959, becoming only the second African-American to win an NCAA wrestling title. The only college athlete to win division one titles in two different sports in the same year 1959. He played professionally in the American Football League (AFL) for the Buffalo Bills in 1961 and 1962. He then went to the Canadian Football League (CFL), where he played four seasons, mainly for the Hamilton Tiger-Cats. Baker lives in Miami Florida.

Dallas Leon Baker is a former American football wide receiver. Baker played college football for the University of Florida, and thereafter, he has played professionally for the Pittsburgh Steelers of the National Football League (NFL) and the Jacksonville Sharks of the Arena Football League (AFL). As a member of the Steelers, he won Super Bowl XLIII against the Arizona Cardinals. He is previously the wide receivers coach at Marshall University.

Carl Paul Baker is an English professional footballer who plays as a winger or as an attacking midfielder for National League North club Brackley Town.

Roy Marlon Baker was a professional American football player in the National Football League and the first American Football League. Over the span of his career, Baker played for the Chicago Cardinals, New York Yankees, Green Bay Packers, Staten Island Stapletons of the NFL. Before that played again in 1926 for the Yankees of the AFL. After his NFL career ended he played for the St. Louis Gunners in 1931 and was their coach in 1932. Baker won an NFL Championship in 1929 with the Green Bay Packers.

Courtney Romello Baker-Richardson is an English footballer who plays as a forward for Barnet on loan from English League Two club Barrow.

May & Baker Eastbrook Community Football Club is a football club based in Dagenham, Greater London, England. They are currently members of the Eastern Counties League Division One South and play at Parkside, Aveley, where they share with Aveley. 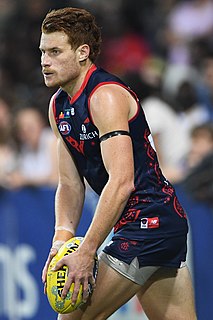