The Academia Waltz was Berkeley Breathed's first comic strip, published daily from 1978 to 1979 in The Daily Texan at The University of Texas at Austin, where he was a student. [1] The strip focused primarily on college life, although it sometimes made references to big news stories of the time (such as the Three Mile Island accident in 1979).

Two of the characters from The Academia Waltz would be resurrected for Breathed's next strip, Bloom County : Steve Dallas and Saigon John (renamed "Cutter John"). Rabies also became a character early on in the strip, but disappeared around the time that Opus the Penguin (who would later become Breathed's most popular character) appeared; Breathed cites one reason for Rabies being "retired" is that there was "no shortage of cartoon dogs". [2]

Kitzi later made a guest appearance in Bloom County in 1985, although the character had been altered to be Steve's younger sister rather than his girlfriend (jailed for protesting Apartheid, even though their sorority doesn't even admit blacks).

Two collections featuring the comic were published. They are currently out of print and extremely rare, or as Breathed's website claims, "eBay is your only hope." [3]

A few Academia Waltz comics were also reprinted in the Bloom County collection Classics of Western Literature (1990), as well as in Bloom County: The Complete Library: Volume One: 1980–1982 (2009).

In August 2015, IDW Publishing released an anthology titled "Berkeley Breathed’s Academia Waltz & Other Profound Transgressions." The anthology collects work from Breathed's college days, publishing his strips from The Daily Texan , his college newspaper from 1978 to 1979, along with scanned original art from his personal archives featuring Academia Waltz strips (with author's margin notes) and political cartoons. [4] [5] 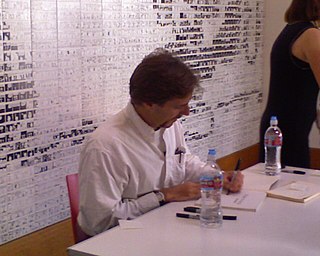 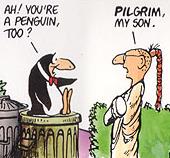 Steve Dallas is a fictional character in the American comic strips of Berke Breathed, most famously Bloom County in the 1980s.

Opus was a Sunday strip drawn by Berkeley Breathed from November 23, 2003 to November 2, 2008. It was Breathed's fourth comic strip, following The Academia Waltz, Bloom County and Outland.

Cutter John is a fictional character in the 1980s comic strip Bloom County by Berke Breathed.

Lola Granola, also known as Fatima Struggle, is a fictional character in the comic strips Bloom County and Opus by Berkeley Breathed.

GoComics, from Andrews McMeel Universal, is a website launched in 2005 by the digital entertainment provider Uclick. It was originally created as a distribution portal for comic strips on mobile phones, but in 2006, the site was redesigned and expanded to include online strips and cartoons. GoComics publishes editorial cartoons, mobile content and daily comics. GoComics.com is the web's largest catalog of syndicated newspaper strips, political cartoons and webcomics, offering free new content every day. 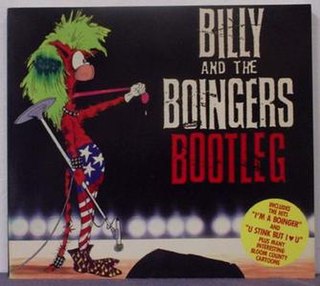 Billy and the Boingers Bootleg is the fifth collection of the comic strip series Bloom County by Berkeley Breathed. It was published in 1987. 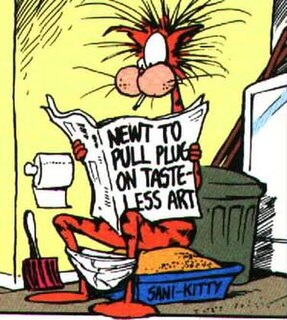 Bill the Cat, or Bill D. Cat, is a fictional cat appearing in the works of cartoonist Berkeley Breathed, beginning with the comic strip Bloom County in the 1980s and continuing in Outland and Opus in the following decades. Bill also appeared in some of Breathed's illustrated children's books, including A Wish for Wings That Work, which was also made into an animated Christmas television special, and also on greeting cards and other sundry merchandise. Bill was originally capable of speaking English reasonably well, but storylines featuring an automobile accident, repeated periods of drug abuse, and brain surgery have since seen the character transition to a nearly mentally handicapped mute state in which the cat's most frequent spoken sentiments are "Ack!" and "Thppt!" - the former a result of his regularly choking on hairballs, the latter an approximation of "blowing a raspberry".

Dean Mullaney is an American editor, publisher, and designer whose Eclipse Enterprises, founded in 1977, was one of the earliest independent comic-book companies. Eclipse would publish some of the first graphic novels and was one of the first comics publishers to champion creators' rights. In the 2000s, he established the imprint The Library of American Comics of IDW Publishing to publish hardcover collections of comic strips. Mullaney and his work have received seven Eisner Awards.

The Sunday Funnies is a publication reprinting vintage Sunday comic strips at a large size (16"x22") in color. The format is similar to that traditionally used by newspapers to publish color comics, yet instead of newsprint, it is printed on a quality, non-glossy, 60 pound offset stock for clarity and longevity. Featured are classic American comic strips from the late 19th century to the 1930s. The publication's title is taken from the generic label often used for the color comics sections of Sunday newspapers.

The Ringo Awards are given for achievement in comic books. Named for artist Mike Wieringo, the Ringo Awards were founded by Cards, Comics, and Collectibles in Reisterstown, Maryland, and the Ringo Awards Committee in 2017 to be the successor to the Harvey Awards that left the Baltimore Comic-Con as its venue in 2016.

Bloom County: The Complete Library is a book series published by The Library of American Comics which collects the complete comic strips Bloom County, Outland and Opus all written and drawn by Berkeley Breathed between 1980 and 2008. The first volume of this series was published in September, 2009, and also received the Eisner award in the category Best Archival Collection/Project - Strips in 2010; in November 2012, the final and seventh volume finished the series.

The Amazing Spider-Man: The Ultimate Newspaper Comics Collection is a series of books collecting the complete run of The Amazing Spider-Man newspaper comic strips by Marvel Comics, an American comic strip title which debuted on January 3, 1977. It was first syndicated by Register and Tribune Syndicate (1977–1985), later Cowles Media Company (1986), and currently King Features Syndicate (1987–onwards). The series launched in 2015 and is published by The Library of American Comics.