Universal Press Syndicate (UPS), a subsidiary of Andrews McMeel Universal, was an independent press syndicate. It distributed lifestyle and opinion columns, comic strips and other content. Popular columns include Dear Abby, Ann Coulter, Roger Ebert and News of the Weird. Founded in 1970, it was merged in July 2009 with Uclick (which published its comics on GoComics) to form Universal Uclick [2] (now known as Andrews McMeel Syndication).

Universal Press Syndicate was founded by John McMeel and Jim Andrews in 1970, two graduates of the University of Notre Dame. Their early syndication success came as a result of Andrews reading the Yale Daily News . While clipping a column by a priest, he was distracted by Garry Trudeau's Bull Tales comic strip on the facing page. When Trudeau's Doonesbury debuted as a daily strip in two dozen newspapers on October 26, 1970, it was the first strip from Universal Press Syndicate, and a Sunday strip was launched March 21, 1971. Circulation of Doonesbury eventually expanded to more than 1,400 newspapers internationally. [3]

At first, ownership of the comic strips was in the hands of both the artist and the syndicate, but beginning in 1990, UPS gave comic strip creators full rights to their respective works. The company also instituted a policy that says any cartoonist who has been with them for five years or more receives four weeks a year of vacation. [7]

Universal New Media was renamed Uclick in 1997. [10] Also in 1997, Jim Andrews and John McMeel formed Andrews McMeel Universal (AMU) to reflect the diversification that had taken place since its founding. Universal Press Syndicate became one of AMU's subdivisions (along with Uclick and Andrews McMeel Publishing).

In 2004, UPS acquired the international syndicate Editors Press Service (founded in 1933) from the Evening Post Publishing Company and renamed it Atlantic Syndication. [11]

UPS strips as of the July 2009 merger into Universal Uclick:

Concluded UPS strips as of July 2009:

Past and present UPS columns and columnists include:

FoxTrot is an American comic strip written and illustrated by Bill Amend. The strip launched on April 10, 1988, and it ran seven days a week until December 30, 2006. Since then, FoxTrot has strictly appeared on Sundays.

Ruben Bolling is a pseudonym for Ken Fisher, an American cartoonist, the author of Tom the Dancing Bug and Super-Fun-Pak Comix. His work started out apolitical, instead featuring absurdist humor, parodying comic strip conventions, or critiquing celebrity culture. He came to increasingly satirize conservative politics after the September 11 attacks and Iraq war in the early 2000s. This trend strengthened with the Donald Trump presidency and right-wing populism from 2017-2020, his critiques of which earned him several cartooning awards. 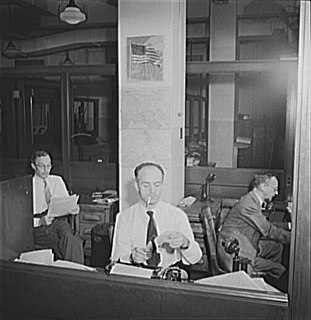 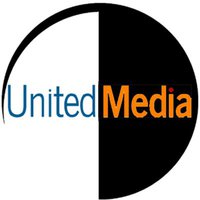 United Media was a large editorial column and comic strip newspaper syndication service based in the United States, owned by the E. W. Scripps Company, that operated from 1978 to 2011. It syndicated 150 comics and editorial columns worldwide. Its core businesses were the United Feature Syndicate and the Newspaper Enterprise Association.

United Feature Syndicate is a large American editorial column and comic strip newspaper syndication service based in the United States and established in 1919. Originally part of E. W. Scripps Company, it was part of United Media from 1978 to 2011, and is now a division of Andrews McMeel Syndication. United Features has syndicated many notable comic strips, including Peanuts, Garfield, Li'l Abner, Dilbert, Nancy, and Marmaduke.

The Newspaper Enterprise Association (NEA) is an editorial column and comic strip newspaper syndication service based in the United States and established in 1902. The oldest syndicate still in operation, the NEA was originally a secondary news service to the Scripps Howard News Service; it later evolved into a general syndicate best known for syndicating the comic strips Alley Oop, Our Boarding House, Freckles and His Friends, The Born Loser, Frank and Ernest, and Captain Easy / Wash Tubbs; in addition to an annual Christmas comic strip. Along with United Feature Syndicate, the NEA was part of United Media from 1978 to 2011, and is now a division of Andrews McMeel Syndication. The NEA once selected college All-America teams, and presented awards in professional football and professional [NBA] basketball.

Don Asmussen is an American cartoonist working for the San Francisco Chronicle and Universal Press Syndicate.

The Duplex is a comic strip by Glenn McCoy and now his brother Gary McCoy, syndicated by Universal Press Syndicate/Universal Uclick/Andrews McMeel Syndication since April 1993.

Mark Tatulli is an American cartoonist, writer, animator and television producer, known for his strips Liō and Heart of the City and for his work on the cable reality television series Trading Spaces and A Wedding Story, for which he has won three Emmy Awards. His comics have appeared in hundreds of newspapers around the world.

Ink Pen is an American daily comic strip by Phil Dunlap which was syndicated by Universal Press Syndicate/Universal Uclick from 2005 to 2012.

Andrews McMeel Universal (AMU) is an American media corporation based in Kansas City, Missouri. It was founded in 1970 by Jim Andrews and John McMeel as Universal Press Syndicate and was renamed in 1997 to AMU to reflect the diversification that had taken place since its founding. It now has the following subdivisions:

Uclick LLC was an American corporation selling "digital entertainment content" for the desktop, the web and mobile phones. Uclick operated several consumer websites, including the comic strip and editorial cartoon site GoComics and the puzzle and casual game sites ThePuzzleSociety.com and UclickGames.com.

The Boley Building in Kansas City, Missouri was designed by Canadian-born American architect Louis Curtiss and built in 1909. It was listed on the National Register of Historic Places in 1971. It is the world headquarters for Andrews McMeel Universal, parent company to Universal Uclick, Andrews McMeel Publishing and GoComics.

Thatababy is a daily humor comic strip created by Paul Trap, launched on October 4, 2010 and syndicated by Andrews McMeel Syndication. The central characters are the titular baby and an unnamed Mom and Dad. Trap describes Thatababy as "a parenting strip through the eyes of the baby." Before syndication Trap entered the strip in the Amazon Comic Strip Superstar contest, where it drew praise from judges Lynn Johnston, Garry Trudeau, Mark Tatulli and Scott Hilburn. Andrews-McMeel has published three e-book collections: Thatababy Rocks Out!, Thatababy Geeks Out! and Thatababy Gets Arty!

Chronicle Features was the syndication arm of the San Francisco Chronicle. Syndicating comic strips, newspaper columns, and editorial features, it operated from 1962 to c. 1998. The syndicate was known for the offbeat comic strips it championed, such as Gary Larson's The Far Side, Dan Piraro's Bizarro, and the editorial cartoons of Ted Rall. The service was acquired by Universal Press Syndicate in 1997 and went defunct soon after.