The Doctor of Craziness

Doktor ludosti is a Croatian comedy film directed by Fadil Hadzic. It was released in 2003.

Statistics of First League of FR Yugoslavia for the 1995–96 season.

HMRK Zrinjski Mostar is a Croat-founded men's handball team from the city of Mostar, Bosnia and Herzegovina. Its current coach is Dario Pušić.

Marshal Tito's Spirit is a 1999 Croatian film directed by Vinko Brešan. It was Croatia's submission to the 73rd Academy Awards for the Academy Award for Best Foreign Language Film, but was not accepted as a nominee.

Bitange i princeze is a situation comedy which aired from 2005 to 2010 on Croatian Radio Television. The series is set in Zagreb, and shows the daily lives of a group of five friends living in two neighbouring apartments, similar to the plot in Friends. However, it contains elements of parody. For instance, as opposed to good relations between the main characters in Friends, the characters of Bitange i princeze are often fighting and making fun of each other, especially Irena Grobnik and Robert "Robi" Kumerle.

The Grabovica massacre refers to the murders of at least 13 ethnic Croat inhabitants of the village of Grabovica near Jablanica by members of the Army of the Republic of Bosnia and Herzegovina (ARBiH) 9th Brigade and other unidentified members of ARBiH on 8 or 9 September 1993. Some sources cite a higher number of victims but these have never been officially corroborated.

Kiss of Life is a 2003 British drama film directed by Emily Young. It was screened in the Un Certain Regard section at the 2003 Cannes Film Festival.

Will Not End Here is a 2008 Croatian / Serbian co-production directed by Vinko Brešan. It is based on a play by Mate Matišić.

Witnesses is a Croatian drama film directed by Vinko Brešan. It was released in 2003.

First Class Thieves is a Croatian comedy film directed by Fadil Hadžić. It was released in 2005.

Pušća Bistra is a Croatian comedy film directed by Filip Sovagovic. It was released in 2005.

Metastases is a 2009 Croatian crime drama film about some of the most common problems in post-war Croatia, including football hooliganism, drug addiction and alcoholism. It was directed by Branko Schmidt.

72 Days is a 2010 Croatian-Serbian black comedy film directed by Danilo Šerbedžija and starring Rade Šerbedžija. The film was selected as the Croatian entry for the Best Foreign Language Film at the 84th Academy Awards, but it did not make the final shortlist.

SFERA Award is awarded annually by the science fiction society SFera in Zagreb since 1981. Until 1991, it was given to participants from whole of Yugoslavia, but since 1994 only for works originally published in Croatian. 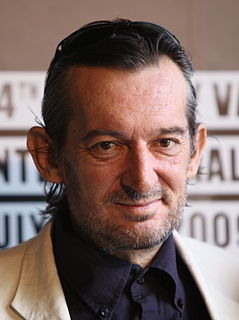 Predrag "Pređo" Vušović was a Croatian actor. He appeared in more than fifty films from 1983 to 2011.

Predrag Stipanović is a Croatian rear admiral, since January 2018 serving as the Croatian Military Representative to NATO.

The Man Under the Table is a Croatian drama film, directed by Neven Hitrec, based on motifs from short stories by Vjekoslav Domini.