The Falling Star is a 1950 West German drama film directed by Harald Braun and starring Werner Krauss, Dieter Borsche and Gisela Uhlen. It was entered into the 1951 Cannes Film Festival. It was shot at the Bavaria Studios in Munich. The film's sets were designed by the art director Hans Sohnle.

Mother and Child is a 1934 German drama film directed by Hans Steinhoff and starring Henny Porten, Peter Voß, and Elisabeth Wendt. It is a sound remake of the 1924 silent film Mother and Child which had been a major hit for Porten. Franz Schroedter worked as art director on the film.

Elisabeth Wendt was a German film actress. After making her debut in Georg Wilhelm Pabst's Comradeship (1931), she appeared mostly in supporting roles during the Nazi era and immediate post-Second World War years.

The Muzzle is a 1938 German comedy film directed by Erich Engel and starring Ralph Arthur Roberts, Hilde Weissner and Charlotte Schellhorn. It was remade in 1958.

Hermann Speelmans was a German stage and film actor. 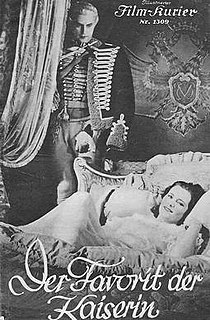 The Empress's Favourite is a 1936 German historical comedy film directed by Werner Hochbaum and starring Olga Chekhova, Anton Pointner and Heinz von Cleve. The film is set in Russia during the reign of Empress Elizabeth. 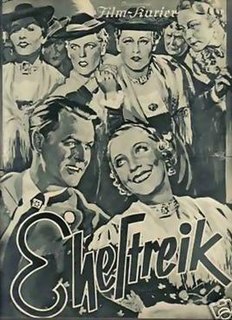 Marriage Strike or Matrimonial Strike is a 1935 German comedy film directed by Georg Jacoby and starring Trude Marlen, Paul Richter and Erika von Thellmann. It was remade in 1953.

Holiday From Myself is a 1934 German comedy film directed by Hans Deppe and starring Hermann Speelmans, Carola Höhn, and Georg H. Schnell. 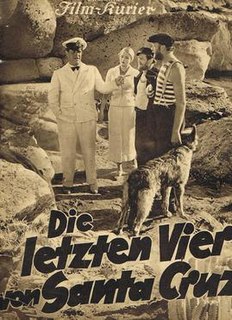