The Juans was initially categorized as a boy band, but the management team decided to recategorize them as a conventional band. Jiad Arroyo was a founding member, along with Daniel Grospe. Carl Guevarra, Jason de Mesa, and Japs Mendoza joined later.

The band was initially named at a coffee shop shortly after a One Direction concert, where the boys were mulling the British boy band's popularity. They were initially called the D’ Juans, after Juan De La Cruz. [3] 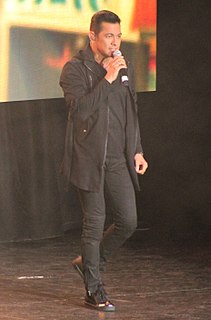 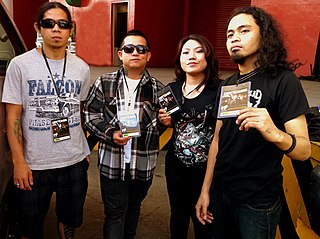 Urbandub is a Filipino rock band from Cebu City, Philippines. Since its inception in 2000, the band's line-up consisted of Gabby Alipe, John Dinopol, Lalay Lim, and JanJan Mendoza who joined in 2003.

Davey Ryan Edward Langit is a singer-songwriter and instrumentalist who kicked off his music career during Pinoy Dream Academy's first season (2006). He honed his singing and songwriting prowess during his stint writing songs like Dinggin, Sikat Ako, Spending My Life With You, Awit Para Sa Kanya and also wrote Yeng Constantino's hits Cool Off and Time In. He then merged with fellow scholars to form the short lived Cebalo band which re-arranged and performed Pinoy Ako for PBB's second season.

Perfecto "Perf" de Castro is a Filipino musician, currently focusing on Classical and Flamenco music played on the Ten-string guitar, but perhaps best known for having been a celebrated fixture in the Philippine alternative rock scene during the 1990s. During the course of that decade, he was one of the original members of the alternative rock band Rivermaya, founded the band Triaxis, and also collaborated with the seminal Filipino rapper Francis Magalona and Filipino hard rock band Wolfgang.

Slapshock was a Filipino heavy metal band. They were formed in 1997, originally as a nu metal act, with their early musical style compared to that of Korn. They have since shifted towards a metalcore style. 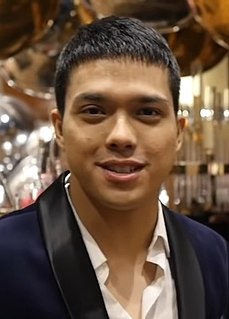 Jorge Andrew Elmo Moses Cordova Arroyo Magalona is a Filipino actor and singer. He is currently an artist of ABS-CBN and Star Magic. He is the child of Francis Magalona and Pia Magalona.

"Ikaw" (You) is a hit song written and recorded by Filipino singer-songwriter Yeng Constantino, released as the lead single from her album All About Love. The song became the most played OPM song of 2014 and is currently the second most viewed music video by a Filipino female artist on YouTube with over 100 million views as of June 2020, behind Sarah Geronimo's Tala. 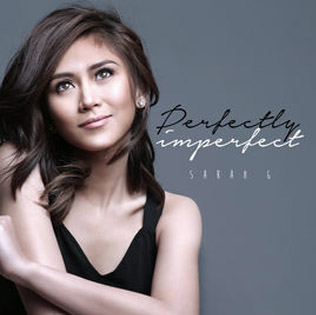 Perfectly Imperfect is the eleventh studio album by Filipino singer Sarah Geronimo and was released in the Philippines on October 4, 2014 by Viva Records.

Kilometro is a hit song by Filipino singer-actress Sarah Geronimo. It is the carrier single of her eleventh studio album Perfectly Imperfect. The song was written by Thyro Alfaro and Yumi Lacsamana and premiered on radio stations nationwide on September 17, 2014.

IV of Spades is a Filipino rock band from Metro Manila, Philippines, consisting of vocalist, bassist and keyboardist Zild Benitez, vocalist and lead guitarist Blaster Silonga, and drummer Badjao de Castro. Unique served as the band's lead vocalist and rhythm guitarist until 2018. The band first gained exposure with the release of their 4th single "Mundo". On August 21, 2020, the band entered a hiatus.

Unique Torralba Salonga, known mononymously as Unique, stylized as UNIQUE, is a Filipino musician and singer-songwriter. He began his career as a vocalist and original frontman of IV of Spades and later pursued a solo career.

Daniel Zildjian Garon Benitez, is a Filipino musician, producer, and singer-songwriter. He is currently the lead vocalist, pianist/keyboardist, synth player and bassist of IV of Spades. 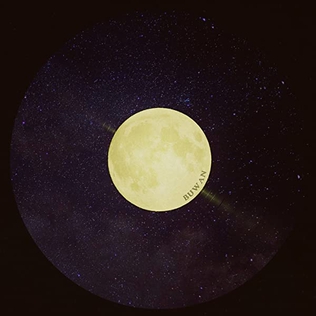 "Buwan" (transl. "Moon") is a song written and sung by Filipino actor, singer and songwriter, Juan Karlos Labajo. It was released on June 22, 2018, through MCA Music. The song became one of the most played OPM songs of 2018, winning Song of the Year at the 2019 Myx Music Awards, 2019 Awit Award for People's Voice Favorite Song. "Buwan" received huge popularity and started as a song challenge through social media platforms in the Philippines even overseas. 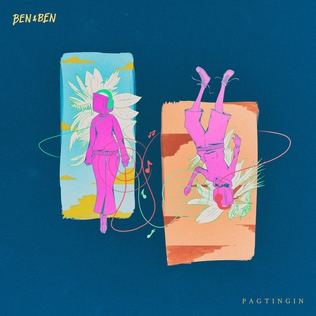 Pagtingin is a song by Filipino folk-pop band Ben&Ben, composed by lead vocalist Paolo Benjamin Guico. It was released alongside "Araw-Araw" on May 2, 2019. It was used for the film LSS released in 2019 under Globe Studios.