The Lightship (German : Das Feuerschiff) is a 1963 West German thriller film directed by Ladislao Vajda and starring James Robertson Justice, Helmut Wildt, and Dieter Borsche. [1] It is based on a story by Siegfried Lenz, which was adapted again as the 1985 film The Lightship .

The film's sets were designed by the art director Johannes Ott. It was shot at the Tempelhof Studios in Berlin and on location in Copenhagen and Malmö.

James Robertson Justice was a British film actor. He is best remembered for playing pompous authority figures in comedies including each of the five films in the Doctor series. He also co-starred with Gregory Peck in several adventure movies, notably The Guns of Navarone. Born in south London, he exaggerated his Scottish roots but was prominent in Scottish public life, helping to launch Scottish Television and serving as Rector of the University of Edinburgh. 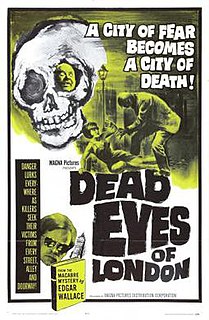 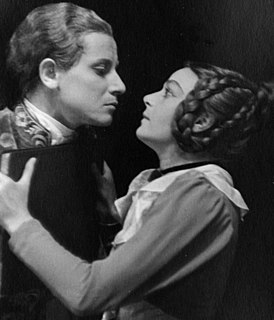 Albert Eugen Rollomann, better known as Dieter Borsche, was a German actor. He appeared in over 90 films between 1935 and 1981. Since 1944, he suffered from muscle atrophy and had to use a wheelchair since the late 1970s. He was born in Hanover, Germany and died in Nuremberg, Germany. Borsche became a film star after World War II following his performance in Keepers of the Night (1949). 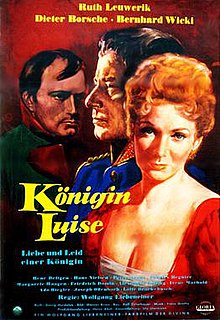 Queen Louise is a 1957 West German historical drama film directed by Wolfgang Liebeneiner and starring Ruth Leuwerik, Dieter Borsche and Bernhard Wicki. It was made at the Emelka Studios in Munich, with sets designed by the art director Rolf Zehetbauer.

Michael Hinz was a German actor.

At the Green Cockatoo by Night is a 1957 West German musical film directed by Georg Jacoby and starring Marika Rökk, Dieter Borsche and Renate Ewert. 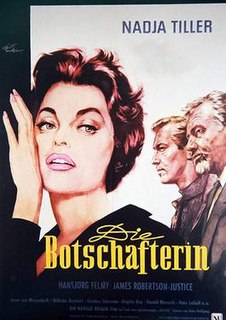 Königliche Hoheit is a 1953 West German comedy film directed by Harald Braun and starring Dieter Borsche, Ruth Leuwerik, and Lil Dagover. It is based on the 1909 novel of the same name by Thomas Mann. 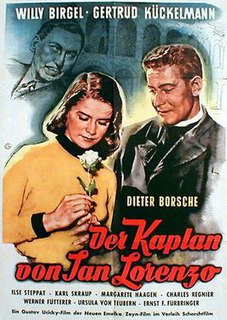 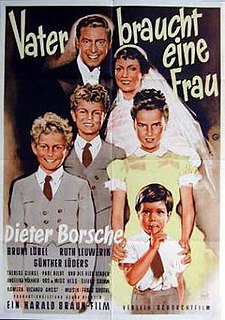 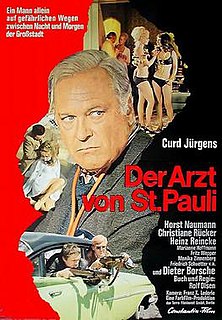 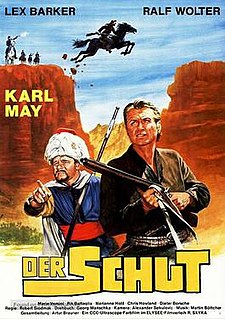 The Shoot is a 1964 adventure film directed by Robert Siodmak and starring Lex Barker, Marie Versini and Ralf Wolter. It was made as a co-production between West Germany, France, Italy and Yugoslavia. It is based on the 1892 novel of the same title by Karl May, and was part of a cycle of adaptations of his work started by Rialto Film's series of western films. It was a commercial success, benefiting from the presence of Barker and Versini who were stars of Rialto's series. 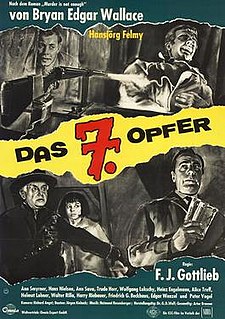 Life Begins at Eight is a 1962 West German drama film directed by Michael Kehlmann and starring O.E. Hasse, Johanna Matz and Helmut Wildt. It is an adaptation of the 1940 play The Light of Heart by Emlyn Williams, previously adapted into a 1942 Hollywood film Life Begins at Eight-Thirty. The action is moved from the play's setting of London to Berlin.

Helmut Wildt was a German stage, film and television actor. 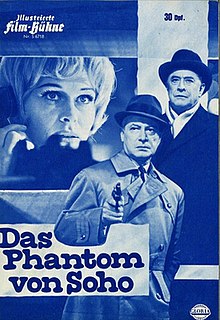 The Phantom of Soho is a 1964 West German thriller film directed by Franz Josef Gottlieb and starring Dieter Borsche, Barbara Rütting and Hans Söhnker. It was based on a novel by Bryan Edgar Wallace and was part in a large group of British-set thrillers made in Germany at the time, many of them adapted from the works of Wallace's father Edgar Wallace.