The Practical Pig is a Silly Symphony cartoon. It was released on February 24, 1939, and directed by Dick Rickard. [1] [2] It was the fourth and final cartoon starring The Three Pigs. [3] Like its prequels, The Practical Pig incorporates the song "Who's Afraid of the Big Bad Wolf?". [4] Unlike its prequels however, this was labeled as a standalone "Three Little Pigs Cartoon", suggesting that they were to get their own series of cartoons. It is also the second-to-last Silly Symphony cartoon. [5]

Practical Pig is hard at work building a new anti-wolf contraption, this time a lie detector. His two brothers, Fiddler and Fifer Pig decide to go swimming, despite Practical's warning about the Big Bad Wolf lurking by the pond. The Big Bad Wolf disguises as a mermaid to lure Fiddler and Fifer and captures them and bringing them to an old windmill where his sons the Three Little Wolves are waiting for their dinner, but tells them they must not eat until he captures Practical. The Wolf plans to entrap Practical as well using a fake letter requesting help by his brothers. While the wolf is off to capture Practical, the Three Little Wolves start early to put the two pigs into a pan and prepare to bake them into a pie. The Wolf, disguised as a messenger boy, blows his cover when he blows the fake letter under Practical's door. Realizing the wolf is up to his tricks and his brothers have been captured, Practical tries out his new invention. As the wolf attempts to lure Practical, the welcome mat opens under the wolf's feet, and the wolf falls into the pit below. He is next seen strapped in a chair in the basement, captured, as Practical demands to know his brothers' whereabouts. The wolf first he claims he has never heard of Practical's brothers and secondly he claims he hasn't seen them, but the lie detector detects his lies and punishes the wolf with brushes to wash his mouth out with soap and spank him in each case. The wolf then lastly tries to fool the machine by claiming that he and Practical are pals, but the lie detector sees through this and gives him both of the works.

Back at the wolves' hideout, the Three Little Wolves are about to bake Fifer and Fiddler into the oven as the two pigs tell them they'll be sorry when their father comes home. One of the wolf cubs uses pepper but the lid accidentally comes off and this causes the two pigs to sneeze so strong, the pie doe is duffed off and into the wolves splatting them against the wall like glue. With the wolf cubs trapped, Fiddler and Fifer escape and rush back to Practical's house.

The lie detector punishes the Wolf harder and harder until he finally tells the truth, saying "They're in the old mill". He is then shot out of the house with a firecracker and seemingly explodes in the sky. Practical prepares to go save his brothers when Fiddler and Fifer burst in. When Practical scolds them for defying his orders, they tell him that they didn't go swimming, at which point the lie detector springs into action and gives them a spanking.

The Silly Symphony Sunday comic strip ran a three-month-long adaptation of The Practical Pig from May 1 to August 7, 1938. [6]

The Film Daily wrote, "The musical effects here heighten the comedy to howling proportions... While lacking a hit tune, this edition of the Three Pigs is a delightful bit of nonsense." [7]

The short was released on December 4, 2001 on Walt Disney Treasures: Silly Symphonies - The Historic Musical Animated Classics , [8] as an easter egg in the options menu . [5] It has also been released as a bonus feature on the British VHS edition of Dumbo .

Theodore H. Osborne was an American writer of comics, radio shows and animated films, remembered for his contributions to the creation and refinement, during the 1930s, of Walt Disney cartoon characters. 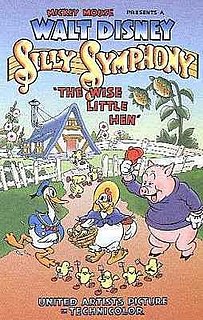 Pigs in a Polka is a 1943 Warner Bros. Merrie Melodies cartoon series directed by Friz Freleng. The short was released on February 2, 1943. 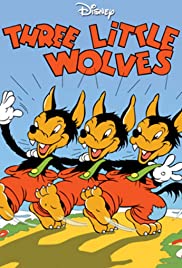 "Who's Afraid of the Big Bad Wolf?" is a popular song written by Frank Churchill with additional lyrics by Ann Ronell, which originally featured in the 1933 Disney cartoon Three Little Pigs, where it was sung by Fiddler Pig and Fifer Pig as they arrogantly believe the Big Bad Wolf is not a serious threat. The song created a market for future Disney tunes and led to a contract with Irving Berlin Publishing Co. that same year, securing the sheet music rights over Mickey Mouse and the Silly Symphonies. The song's theme made it a huge hit during the second half of 1933 and it remains one of the most well-known Disney songs, being covered by numerous artists and musical groups.

The Ugly Duckling is an animated black-and-white cartoon released by Walt Disney in 1931 as part of the Silly Symphonies series. This cartoon was later remade into a color version released in 1939. 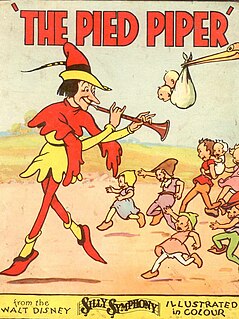 The Pied Piper is a 1933 American Pre-Code animated short film based on the story of the Pied Piper of Hamelin. The short was produced by Walt Disney Productions, directed by Wilfred Jackson, and released on September 16, 1933, as a part of the Silly Symphonies series.