The Two Foscari: An Historical Tragedy (1821) is a verse play in five acts by Lord Byron. The plot, set in Venice in the mid-15th century, is loosely based on the true story of the downfall of doge Francesco Foscari and his son Jacopo. [1] Byron's play formed the basis of Verdi's opera I due Foscari .

Jacopo Foscari, son of the Doge of Venice, has twice been exiled, once for corruption and once for complicity in the murder of Donato, a member of the Council of Ten. He has been recalled from his second exile to answer the capital charge of treason, and as the play opens he is between sessions of interrogation on the rack. The Council decide to sentence him to a third exile, this time perpetual, rather than to death. His father, doge Francesco Foscari, signs the sentence of exile, though his spirit is broken by this new disgrace. Jacopo's patriotic spirit cannot brook such a sentence, he longs to die, and he duly does die of a broken heart. The Council of Ten orders the doge to abdicate, and, as the bells begin to toll to signify the election of a new doge, the old one falls and dies.

Byron wrote The Two Foscari in Ravenna in less than a month, between 12 June and 9 July 1821. [2] It was published by John Murray on 19 December 1821 in the same volume as his Sardanapalus and Cain . Byron originally intended to dedicate The Two Foscari to his friend Sir Walter Scott, but in the event he transferred that dedication to Cain and left Foscari without one. [3] He added an appendix to The Two Foscari in which he launched a stinging attack on what he considered the hypocrisies of the Poet Laureate, Robert Southey. Southey responded in a letter to a London newspaper in which he dared Byron to attack him again. Byron initially wanted to challenge Southey to a duel, but then turned instead to poetry and wrote his stinging satire The Vision of Judgment . [4]

The Two Foscari in other media

Francesco Foscari was the 65th Doge of the Republic of Venice from 1423 to 1457. His reign, the longest of all Doges in Venetian history, lasted 34 years, 6 months and 8 days, and coincided with the inception of the Italian Renaissance. 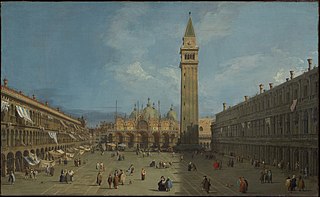 The Doge's Palace is a palace built in Venetian Gothic style, and one of the main landmarks of the city of Venice in northern Italy. The palace was the residence of the Doge of Venice, the supreme authority of the former Venetian Republic. It was founded in 1340, and extended and modified in the following centuries. It became a museum in 1923, and is one of the 11 museums run by the Fondazione Musei Civici di Venezia.

Marino Faliero was the 55th Doge of Venice, appointed on 11 September 1354. 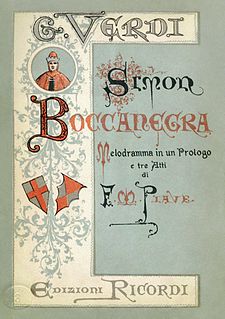 Simon Boccanegra is an opera with a prologue and three acts by Giuseppe Verdi to an Italian libretto by Francesco Maria Piave, based on the play Simón Bocanegra (1843) by Antonio García Gutiérrez, whose play El trovador had been the basis for Verdi's 1853 opera, Il trovatore.

The Basilica di Santa Maria Gloriosa dei Frari, usually just called the Frari, is a church located in the Campo dei Frari at the heart of the San Polo district of Venice, Italy. One of the most prominent churches in the city, it has the status of a minor basilica. The church is dedicated to the Assumption of Mary.

Pietro Loredan was a Venetian nobleman and distinguished military commander both on sea and on land. He fought against the Ottomans, winning the Battle of Gallipoli (1416), played a leading role in the conquest of Dalmatia in 1411–1420, and participated in several campaigns against Venice's Italian rivals, Genoa and Milan, to secure Venice's mainland domains (Terraferma). He also held a number of senior political positions as Avogador de Comùn, ducal councillor, and governor of Zara, Friuli, and Brescia, and was honoured with the position of Procurator of St Mark's in 1425. In 1423, he contended for the position of Doge of Venice, but lost to his bitter rival Francesco Foscari; their rivalry was such that when Loredan died, Foscari was suspected of having poisoned him.

Ca' Foscari, the palace of the Foscari family, is a Gothic building on the waterfront of the Grand Canal in the Dorsoduro sestiere of Venice, Italy. 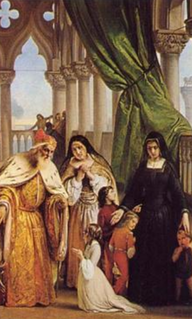 I due Foscari is an opera in three acts by Giuseppe Verdi to an Italian libretto by Francesco Maria Piave, based on a historical play, The Two Foscari by Lord Byron.

The Foscari were an ancient Venetian patrician family, which reached its peak in the 14th–15th centuries, culminating in the dogeship of Francesco Foscari (1423–1457).

A doge was an elected lord and chief of state in many of the Italian city-states during the medieval and renaissance periods. Such states are referred to as "crowned republics". 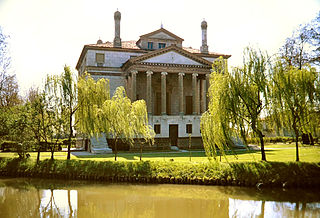 Villa Foscari is a patrician villa in Mira, near Venice, northern Italy, designed by the Italian architect Andrea Palladio. It is also known as La Malcontenta, a nickname which it received when the spouse of one of the Foscaris was locked up in the house because she allegedly didn't live up to her conjugal duty.

The Vision of Judgment (1822) is a satirical poem in ottava rima by Lord Byron, which depicts a dispute in Heaven over the fate of George III's soul. It was written in response to the Poet Laureate Robert Southey's A Vision of Judgement (1821), which had imagined the soul of king George triumphantly entering Heaven to receive his due. Byron was provoked by the High Tory point of view from which the poem was written, and he took personally Southey's preface which had attacked those "Men of diseased hearts and depraved imaginations" who had set up a "Satanic school" of poetry, "characterized by a Satanic spirit of pride and audacious impiety". He responded in the preface to his own Vision of Judgment with an attack on "The gross flattery, the dull impudence, the renegado intolerance, and impious cant, of the poem", and mischievously referred to Southey as "the author of Wat Tyler", an anti-royalist work from Southey's firebrand revolutionary youth. His parody of A Vision of Judgement was so lastingly successful that, as the critic Geoffrey Carnall wrote, "Southey's reputation has never recovered from Byron's ridicule."

Pasquale Malipiero, called the dux pacificus was a Venetian statesman who served as the 66th Doge of Venice from October 30, 1457 until his death. He succeeded Francesco Foscari, and was specifically elected by enemies of the Foscari family. In 1458, he signed into law a number of measures limiting the power of the Council of Ten. He was interred in the Basilica di San Giovanni e Paolo, a traditional burial place of the doges. He was succeeded as Doge by Cristoforo Moro. He was married to Giovanna Dandolo. 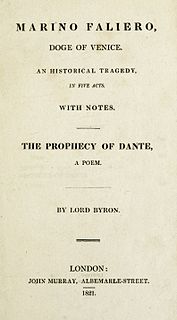 Marino Faliero, Doge of Venice is a blank verse tragedy in five acts by Lord Byron, published and first performed in 1821.

Marina Nani was a Dogaressa of Venice by marriage to the Doge Francesco Foscari.