Thomas Sheehan (born 25 June 1941) is an American philosopher who is the current professor at the Department of Religious Studies, Stanford University and Professor Emeritus at the Department of Philosophy, Loyola University Chicago. He is known for his books on Heidegger and Roman Catholicism. His philosophical specialties are in philosophy of religion, twentieth-century European philosophy, and classical metaphysics. [1] [2] [3] He is the author of The First Coming, a controversial account of Easter. 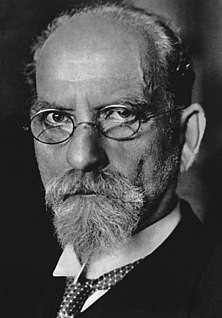 Emmanuel Levinas was a French philosopher of Lithuanian Jewish ancestry who is known for his work related to Jewish philosophy, existentialism, ethics, phenomenology and ontology.

Alfred Schutz was an Austrian philosopher and social phenomenologist whose work bridged sociological and phenomenological traditions. Schutz is gradually being recognized as one of the twentieth century's leading philosophers of social science. He related Edmund Husserl's work to the social sciences, and influenced Max Weber's legacy of philosophical foundations for sociology and economics through Schutz's major work, Phenomenology of the Social World.

Being and Time is a 1927 book by the German philosopher Martin Heidegger, in which the author seeks to analyse the concept of Being. Heidegger maintains that this has fundamental importance for philosophy and that, since the time of the Ancient Greeks, philosophy has avoided the question, turning instead to the analysis of particular beings. Heidegger attempts to revive ontology through a reawakening of the question of the meaning of being. He approaches this through a fundamental ontology that is a preliminary analysis of the being of the being to whom the question of being is important, i.e., Dasein.

Don Ihde is an American philosopher of science and technology. In 1979 he wrote what is often identified as the first North American work on philosophy of technology, Technics and Praxis.

Robert L. Bernasconi is Edwin Erle Sparks Professor of Philosophy at Pennsylvania State University. He is well known as a reader of Martin Heidegger and Emmanuel Levinas, and for his work on the concept of race. He has also written on the history of philosophy.

Dermot Moran is an Irish philosopher specialising in phenomenology and in medieval philosophy, and he is also active in the dialogue between analytic and continental philosophy. He is currently the inaugural holder of the Joseph Chair in Catholic Philosophy at Boston College. He is a member of the Royal Irish Academy and a Founding Editor of the International Journal of Philosophical Studies.

Steven Crowell is an American philosopher who has taught at Rice University since 1983 and is the department chair. Crowell earned his Ph.D. in Philosophy from Yale University in 1981. His work has largely focused on twentieth-century European philosophy, including phenomenology, existentialism, hermeneutics, and post-structuralism. 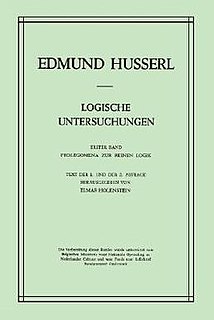 The Logical Investigations are a two-volume work by the philosopher Edmund Husserl, in which the author discusses the philosophy of logic and criticizes psychologism, the view that logic is based on psychology.

The following is a bibliography of John D. Caputo's works. Caputo is an American philosopher closely associated with postmodern Christianity.

Burt C. Hopkins is an American philosopher. He is an Associate Member of the University of Lille, UMR-CNRS 8163 STL, Permanent Faculty member of the Summer School of Phenomenology and Phenomenological Philosophy, Ca’Foscari University of Venice, former Professor and Chair of Philosophy at Seattle University (1989-2016) and Permanent Secretary of the Husserl Circle. He has been Visiting Professor at the University of Nanjing, China (2013), Visiting Professor at The School for Advanced Studies in the Social Sciences (EHESS) and the Koyré Center, Paris, France (2015-17), Senior Fellow at The Sidney M. Edelstein Center for the History and Philosophy of Science, Technology and Medicine, The Hebrew University of Jerusalem (2018), and most recently Researcher at The Institute of Philosophy, Czech Academy of Science, Prague, The Capital, Czech Republic (2019).