Thomas Speght (died 1621) was an English schoolmaster and editor of Geoffrey Chaucer.

He was from a Yorkshire family, and matriculated as a sizar of Peterhouse, Cambridge in 1566, graduating B.A. in 1570, and M.A. in 1573. At Cambridge he was supported by a scholarship from Lady Mildred Cecil. He went to London, and became a schoolmaster. [1] [2] [3]

According to the epitaph on the tomb of his son Lawrence, Speght as schoolmaster was a "paragon". [1]

In 1598 Speght edited the works of Chaucer. He had the assistance of John Stow the chronicler, and built on Stow's Chaucer edition of 1561. He included a glossary, and an influential biography of Chaucer, as well as annotations. He included works now not associated with Chaucer. [3]

The full title of his edition ran: The Workes of our Antient and learned English Poet, Geffrey Chaucer, newly Printed. In this Impression you shall find these Additions: (1) His Portraiture and Progenie Shewed. (2) His Life collected. (3) Argument to euery Booke gathered. (4) Old and Obscure Words explained. (5) Authors by him cited declared. (6) Difficulties opened. (7) Two Bookes of his neuer before printed (i.e. his Dreame and The Floure and the Leafe ), published London, folio 1598. [1]

The volume was dedicated to Sir Robert Cecil. Some copies were published by George Bishop, and others by Thomas Wight. A prefatory letter, addressed to the editor in 1597, by Francis Beaumont (d. 1624) of West Goscote, Leicestershire, supplied "a judicious apology for the supposed levities of Chaucer". Neither the Dreame nor The Floure and the Leafe is now thought to be connected to Chaucer. [1]

Meanwhile Francis Thynne, whose father William Thynne had published a 1532 edition of Chaucer, was preparing notes for a commentary on the poet's works. On the publication of Speght's edition, Thynne abandoned his project and criticised Speght's performance in a long manuscript letter of Animadversions addressed to Speght and dedicated to Sir Thomas Egerton. The manuscript went to the Bridgwater library, was first printed in 1810 by Henry John Todd in his Illustrations of Gower and Chaucer (pp. 1–83), and was reprinted for the Early English Text Society in 1865 (new edit. 1875). When a reprint of Speght's edition of Chaucer was called for in 1602, he used Thynne's assistance, acknowledged in the preface, with also notes and corrections supplied by John Stow. [1]

The second edition bore the title: The Workes of our Ancient and learned English Poet Geoffrey Chaucer newly printed. To that which was done in the former Impression thus much is now added: (1) In the life of Chaucer many things inserted. (2) The whole Worke by old Copies reformed. (3) Sentences and Prouerbes noted. (4) The Signification of the old and obscure words prooued. (5) The Latine and French not Englished by Chaucer translated. (6) The Treatise called Jacke Vpland against Friers: and Chaucer's A.B.C. called La Prière de nostre Dame, at this Impression added, published London, folio 1602. [1]

The volume was again dedicated to Sir Robert Cecil. The Treatise called Jacke Vpland is not by Chaucer, but Chaucer's A B C is a genuine work. A later edition, with John Lydgate's Siege of Thebes, appeared in 1687. [1]

Speght married Anne, whose surname may have been Hill, and they had a family of at least 11, with three sons and eight daughters. They lived near Cripplegate, in a house by the chapel of St James in the Wall, where Speght taught. [3] This house and school were surveyed in 1612 by Ralph Treswell, as the property belonged to the Clothworkers' Company. [4]

Speght's son Laurence accompanied Sir Paul Pindar on his embassy to Constantinople, and was on 10 March 1639 granted in reversion the office of surveyor-general of the customs. He was buried at Clopton, Northamptonshire. [1] Humfrey Dyson (died 1633) the book collector married one of the daughters. [3]

Rachel Speght the poet, daughter of the Calvinist cleric James Speght, may have been a relation; [5] James Speght, D.D., of Christ's College, Cambridge (son of John Speght of Horbury, Yorkshire), published in 1613 A briefe demonstration who have and of the certainty of their salvation that have the spirit of Christ. [1] Thomas Speght's will mentions a brother James, who has been identified tentatively with the cleric. [3]

The Canterbury Tales is a collection of 24 stories that runs to over 17,000 lines written in Middle English by Geoffrey Chaucer between 1387 and 1400. In 1386, Chaucer became Controller of Customs and Justice of Peace and, in 1389, Clerk of the King's work. It was during these years that Chaucer began working on his most famous text, The Canterbury Tales. The tales are presented as part of a story-telling contest by a group of pilgrims as they travel together from London to Canterbury to visit the shrine of Saint Thomas Becket at Canterbury Cathedral. The prize for this contest is a free meal at the Tabard Inn at Southwark on their return. 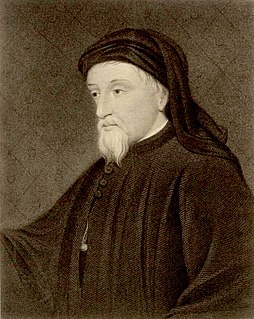 Geoffrey Chaucer was an English poet and author. Widely seen as the greatest English poet of the Middle Ages, he is best known for The Canterbury Tales. Chaucer has been styled the "Father of English literature". He was the first writer buried in Poets' Corner of Westminster Abbey. Chaucer also gained fame as a philosopher and astronomer, composing the scientific A Treatise on the Astrolabe for his 10-year-old son Lewis. He maintained a career in the civil service as a bureaucrat, courtier, diplomat, and member of parliament.

Rachel Speght was a poet and polemicist. She was the first Englishwoman to identify herself, by name, as a polemicist and critic of gender ideology. Speght, a feminist and a Calvinist, is perhaps best known for her tract A Mouzell for Melastomus. It is a prose refutation of Joseph Swetnam's misogynistic tract, The Arraignment of Lewd, Idle, Froward, and Unconstant Women, and a significant contribution to the Protestant discourse of biblical exegesis, defending women's nature and the worth of womankind. Speght also published a volume of poetry, Mortalities Memorandum with a Dreame Prefixed, a Christian reflection on death and a defence of the education of women.

The Pilgrim's Tale is an English anti-monastic poem. It was probably written ca. 1536–38, since it makes references to events in 1534 and 1536 – i.e., the Lincolnshire Rebellion – and borrows from The Plowman's Tale and the 1532 text by William Thynne of Chaucer's Romaunt of the Rose, which is cited by page and line. It remains the most mysterious of the pseudo-Chaucerian texts. In his 1602 edition of the Works of Chaucer, Thomas Speght mentions that he hoped to find this elusive text. A prefatory advertisement to the reader in the 1687 edition of the Works speaks of an exhaustive search for The Pilgrim's Tale, which had proved fruitless

Jack Upland or Jack up Lande is a polemical, probably Lollard, literary work which can be seen as a "sequel" to Piers Plowman, with Antichrist attacking Christians through corrupt confession. Jack asks a "flattering friar" nearly seventy questions attacking the mendicant orders and exposing their distance from scriptural truth.

St Mary Magdalen, Milk Street, was a parish church in the City of London, England. It was destroyed in the Great Fire of London in 1666 and not rebuilt.

Dulcarnon or dulcarnoun is a term used in the Middle English poem Troilus and Criseyde by Geoffrey Chaucer, in a line given to Criseyde: "at dulcarnoun, right at my wittes ende". It became proverbial. The etymology is from an Arabic phrase dhū-al-qarnayn meaning "two-horned", and the term was in use in medieval Latin.

The Floure and the Leafe is an anonymous Middle English allegorical poem in 595 lines of rhyme royal, written around 1470. During the 17th, 18th, and most of the 19th century it was mistakenly believed to be the work of Geoffrey Chaucer, and was generally considered to be one of his finest poems. The name of the author is not known but the poem presents itself as the work of a woman, and some critics are inclined to take this at face value. The poet was certainly well-read, there being a number of echoes of earlier writers in the poem, including Geoffrey Chaucer, John Lydgate, John Gower, Andreas Capellanus, Guillaume de Lorris, Guillaume de Machaut, Jean Froissart, Eustache Deschamps, Christine de Pizan, and the authors of the "Lai du Trot" and the Kingis Quair.

Robert Braham was an English editor.

William Vallans was an English poet.