The Thompson's Loss and Gain Site is a colonial-era historic site near Rehoboth Beach in Sussex County, Delaware. It is an archaeological site encompassing a tenant farm that was in active use from about 1720 to 1780. The site includes the site of a house, root cellar, and well. [2] It was listed on the National Register of Historic Places in 1978. [1]

Buildings, sites, districts, and objects in Delaware listed on the National Register of Historic Places:

The following properties are listed on the National Register of Historic Places in Sussex County, Delaware, United States. 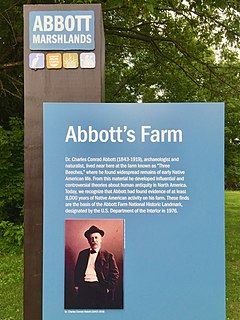 The Abbott Farm Historic District is a National Historic Landmark archaeological site in New Jersey. It is the largest known Middle Woodland village of its type on the East Coast of the United States. Significant evidence suggests that the Delaware River floodplain was occupied by Paleoindian people for a long period. It was inhabited between 500 BC and 500 AD. It has been a source of controversy and debate around early development.

Minisink Archeological Site, also known as Minisink Historic District, is an archeological site of 1320 acres located in both Sussex County, New Jersey and Pike County, Pennsylvania. It was part of a region occupied by Munsee-speaking Lenape that extended from southern New York across northern New Jersey to northeastern Pennsylvania. The Munsee were speakers of one of the three major language dialects of the Lenape Native American tribe. This interstate territory became the most important Munsee community for the majority of the 17th and 18th centuries.

Omar is an unincorporated community in Sussex County, Delaware, United States, located at the crossroads of Delaware Route 20 and Sussex County Road 54 and between the towns of Dagsboro and Roxana.

Salisbury Farm is a prehistoric and historic archaeological site located in the Bridgeport section of Logan Township, Gloucester County, New Jersey, United States. The site, located in the vicinity of Raccoon Creek and the Delaware River, was the site of both Native American habitation and of early colonial settlement in the mid-17th century. The site, first investigated under the auspices of the Works Progress Administration in 1937, was added to the National Register of Historic Places on March 7, 1979.

Warren T. Wright Farmhouse Site is a historic archaeological site located near Millsboro, Sussex County, Delaware. It once included a farmhouse similar to the nearby Robert Davis Farmhouse, but this was destroyed by a fire in the 1970s. The remains are partially visible. Warren Wright was a leader in the nativist movement during the period of the Indian River Nanticoke community.

Avery's Rest Site is an archaeological site located near Rehoboth Beach, Sussex County, Delaware. It is the site of the 17th century colonial plantation of Captain John Avery, who moved to this site from Maryland in 1675. Avery served as Captain of the Militia and Governor Edmund Andros appointed him a justice of the peace of Whorekill Court in 1678. He eventually had 800 acres of land on Rehoboth Bay and lived here until his death in 1682. The archaeology suggests the site was still lived at after his death. The site was excavated in 2007–08.

The Carey Farm Site (7K-D-3) is a prehistoric Native American archaeological site in central Kent County, Delaware, near Dover. The site, located along the St. Jones River, encompasses what is believed to be a major seasonal base camp from the Woodland Period. Ceramics dating to 200 CE have been found at the site.

The Baltimore Mills Historic Archaeological Site is a historic industrial mill site in Sussex County, Delaware. It consists of an 18th-century mill complex that included water-powered gristmills and sawmills. The area is now an orchard.

The Roosevelt Inlet Shipwreck (7S-D-91A) is an 18th-century shipwreck in the waters of Delaware Bay near Lewes, Delaware. The wreck was discovered during dredging operations near Roosevelt Inlet in 2004, and was examined by underwater archaeologists in 2006. Analysis indicates that the ship was a commercial vessel that had probably come from Europe, and was wrecked sometime between 1772 and 1780. More than 40,000 artifacts were recovered after the dredging operation scattered remains of the wreck on area beaches, and another 26,000 were recovered by the archaeological divers. Only a small portion of the ship hull is intact, making further identification and analysis of the vessel difficult.

The Wilgus Site is a prehistoric Native American camp site in coastal Sussex County, Delaware, near Bethany Beach. The site is located along a now-inundated tributary of the Indian River, with the main living area of the camp on top of a low knoll. Shell middens and refuse heaps, some as much as 8 metres (26 ft) in diameter, are located down the slopes of the knoll. Evidence of the site indicates it was occupied during the Adena culture during the Early Woodland Period.

The Deep Creek Furnace Site is a historic colonial industrial site in rural Sussex County, Delaware, near the community of Middleford. The Deep Creek Furnace is one of the two oldest blast furnaces established in what is now southern Delaware for processing bog iron into wrought iron. It was established by Jonathan Vaughn, who came from Pennsylvania and began acquiring land for it c. 1763. The main furnace was located at the head of Deep Creek, and a forge for processing its pig iron was set up 4 miles (6.4 km) away at present-day Middleford. Vaughn apparently operated the facilities until the outbreak of the American Revolutionary War, in which he served in the Continental Army.

The Pine Grove Furnace Site is a historic colonial industrial site in rural Sussex County, Delaware. Pine Grove was one of the first blast furnaces to be set up in what is now southern Delaware. The endeavor was begun Thomas Lightfoot and Abraham Mitchel, who apparently had the furnace built by late 1765. The exact fate of the works is unclear; it is last mentioned in the documentary record in 1773, and its operations may have been curtailed by the outbreak of the American Revolutionary War a few years later. The site, which included a dam, was located about 2 miles (3.2 km) above the confluence of Deep Creek with the Nanticoke River.

The Townsend Site is a major prehistoric Native American site in Sussex County, Delaware. The Late Woodland site includes at least 90 significant features, including numerous burial sites. The site received its first thorough study in 1948, and was the first Late Woodland site in the state to be examined in consultation with professional archaeologists of the Smithsonian Institution, and resulted in the creation of a typology of ceramics found. 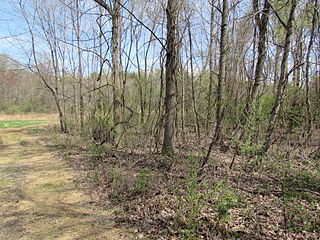 The Clyde Farm Site (7NC-E-6) is a prehistoric archaeological site in rural New Castle County, Delaware. Its main features are remnants of a pit-house, storage area, and hearth, dating to c. 1000 BCE. Another area where stone tools were produced was also identified during excavations in 1984. The site has been known, and the subject of both amateur and professional archaeological interest, since at least the 1930s. It is described as being located near the fall line of a waterway and also an estuarine area.

The Dill Farm Site (7K-E-12) is a prehistoric archaeological site in Kent County, Delaware, near the town of Sandtown. The site located in a formerly swampy area, has yielded dates of 500 BC and 8000 BC. Carey Complex ceramics have also been found at the 55-acre (22 ha) site.

The Indian River Archeological Complex is a collection of archaeological sites near Millsboro, Delaware, encompassing what is the only known riverine settlement in Sussex County during the Middle Woodland Period. It consists of three separate sites, 7S-F-11, 7S-F-12, and 7S-F-13. These sites appear to have been semi-permanent seasonal settlements, occupied during the spring and fall, and abandoned for other hunting and fishing grounds in the summer and winter. Finds at each site include both worked stone artifacts including projectile points, as well as different types of ceramics. The combination of finds raises questions about the pattern of cultural migration in the area, which further investigation of the sites may shed light on. Of the three sites, two have been subjected to surface-level collection, and one, 7S-F-13, has been subjected to more intensive excavations.

The Crosswicks Creek Site III is a historical archaeological site in the vicinity of Bordentown in Burlington County and Hamilton Township in Mercer County, New Jersey. It encompasses the remains of Revolutionary War-era ships that were sunk in Crosswicks Creek in 1778. The site was listed on the National Register of Historic Places on November 26, 1990 for its significance in military and maritime history.