The district of one-room Old Cantrell School was annexed by Thompsonville in 1957. [4] When Logan Community Consolidated School District 110 was dissolved in 2005, part of its territory was annexed to District 62. [1]

Since at least 2002, District 62 and District 112 shared a superintendent and a principal, and were mostly in the same building. [5] They also shared transportation. [6] A reorganization study in the early 2000s, sponsored by a $4,500 Illinois State Board of Education grant, found that the two districts were not eligible to consolidate under the state laws at that time. [6]

School district consolidation was passed by referendum in the April 17, 2007 Illinois consolidated election, on the question "Shall Thompsonville Grade School District 62 and Thompsonville Community High School District 112 establish a Community School District?" It was the only consolidation on the April 2007 ballot in Illinois. [7] The tax referendum for the new district also passed in the same election, on the question "Shall a unit district levy taxes at the rate of Education Fund 2.00%, Operations/Maintenance 0.05%, Transportation 0.24%, etc., each upon all of the taxable property of the district?" [7] The consolidation took effect on July 1, 2007. [1] 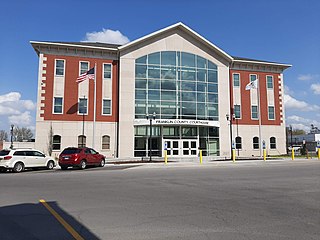 Franklin County is a county in Southern Illinois. At the 2020 census, it had a population of 37,804. The largest city is West Frankfort and the county seat is Benton. This area of Southern Illinois is known locally as "Little Egypt".

Brown County Community Unit School District 1 is a unified school district located in Mount Sterling, the county seat of Brown County, Illinois; it was created out of sixty-seven individual school districts and one parochial school.

Egyptian Community Unit School District 5, also known locally as Egyptian School District or CUSD #5, is a unified school district headquartered in unincorporated Alexander County, Illinois, with a Tamms postal address. Brad Misner is the current superintendent, while Bret Gowin is the principal for all grades serviced by the district. The school district is composed of Egyptian Elementary School, Egyptian Middle School, and Egyptian Senior High School.

Virginia Community Unit School District 64 is a unified school district located in the city of Virginia, the county seat of western Illinois' Cass County. It reports to the state as two schools: Virginia Elementary School for pre-kindergarten through fifth grade, and Virginia Junior/Senior High School for sixth grade through twelfth grade.

Fisher Community Unit School District 1 is a unified school district located in the village of its namesake, Fisher, Illinois; the village, in turn, is located in the northwestern reaches of Champaign County. Fisher Community Unit School District 1, a district of just under 700 students, is composed of two schools: one consolidated elementary and middle school, and one consolidated junior and senior high school. the first branch of education that can be taken in District 1 will be taken in Fisher Grade School, a school that serves first through sixth graders alongside kindergarteners; the current principal is Jake Palmer; the mascot of the school is the bunnies. Education is continued and completed at Fisher Junior/Senior High School, which builds on the education of those attending on grades seventh through twelfth. The principal of the junior senior high school is Jon Kelly, and the school mascot is the bunnies. The current superintendent of the district is Barb Thompson.

Dunlap Community Unit School District 323 is a public school district in Peoria County, Illinois. It is based near Dunlap, Illinois and has one high school, two middle schools, and five elementary schools. Its territory consists of Radnor Township, northeastern Kickapoo Township, the western third of Medina Township, and parts of Akron, Hallock, and Richwoods Townships. It serves the towns of Dunlap and Princeville, the unincorporated communities of Edelstein and Edwards, and the outer northern portions of Peoria.

Arcola Community Unit School District 306 is a unified school district based in a southern Douglas County settlement named Arcola, Illinois. The district is composed of an elementary school and a consolidated junior senior high school. The junior senior high school, although consolidated, is still regarded as two different schools. Students enter the district as prekindergarteners or kindergarteners in Arcola Elementary School, which educates the students until sixth grade under supervision of principal Angie Gentry. Graduates of the elementary school move on to Arcola Junior High School, and will remain there until seventh grade; afterwards, students complete their precollegiate education at Arcola High School. Principal Lisa Sigrist directs both schools; The mascot of both schools, is the Purple Rider. The district superintendent is Tom Mulligan; he broadcasts monthly podcasts to his district.

The administrative divisions of Illinois are counties, townships, precincts, cities, towns, villages, and special-purpose districts. The basic subdivisions of Illinois are the 102 counties. Illinois has more units of local government than any other state—over 8,000 in all. The Constitution of 1970 created, for the first time in Illinois, a type of "home rule", which allows localities to govern themselves to a certain extent. Illinois also has several types of school districts and additional units of government that oversee many other functions.

Beecher Community Unit School District 200U is a south suburbs of Chicago, Illinois

Nauvoo-Colusa Community Unit School District 325 is a school district headquartered in Appanoose Township, just east of Nauvoo, Illinois. It serves northwestern Hancock County, including the city of Nauvoo and the unincorporated community of Colusa.