Illinois State Board of Education

Last updated May 18, 2021
Board that administrates public education in Illinois

The Illinois State Board of Education (ISBE) administers public education in the state of Illinois. The State Board consists of nine members who are appointed by the Governor with the consent of the Senate. Board members serve four-year terms, with State Board membership limited to two consecutive terms. [1] The board sets educational policies and guidelines for public and private schools, preschool through grade 12. It analyzes the aims, needs and requirements of education and recommends legislation to the Illinois General Assembly and Governor for the benefit of the more than 2 million school children in the state. [1]

Local municipalities and their respective school districts operate individual public schools but the ISBE audits performance of public schools with the Illinois School Report Card. The agency is headquartered at 100 North 1st Street in Springfield. The agency also has offices at the James R. Thompson Center in the Chicago Loop. [2]

The ISBE also oversaw private business schools and other vocational schools until 2012, when responsibility for regulating those schools was transferred to the Illinois Board of Higher Education. [3]

The ISBE describes itself as an agency that "commits to promoting and implementing comprehensive policies, practices, and programs that ensure fair access to quality for all students in our state." [4]

The ISBE is described by the Illinois state government's website as an agency that "provides leadership and resources to achieve excellence across all Illinois districts..." [5]

Maine Township High School District 207 is a school district based in Illinois. 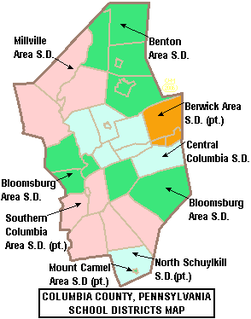 Columbia-Montour Area Vocational-Technical School is located in Bloomsburg, Pennsylvania, United States. It is a full-time area vocational-technical school that serves the youth of Columbia and Montour counties in Pennsylvania. CMAVTS offers 17 training areas to secondary students in grades 9 through 12. In ninth grade, students are put through an exploratory program where they go through four programs through the course of a school year. In tenth grade they choose their "major" to focus on, up until graduation in 12th grade. According to the National Center for Education Statistics, in 2010, the school reported an enrollment of 633 pupils, with 244 pupils receiving a free or reduced price lunch due to family poverty. The school employed 43.5 teachers yielding a student teacher ratio of 14:1. According to a report by the Pennsylvania Department of Education, 100% of it teachers were rated "Highly Qualified" under No Child Left Behind.

The Ministry of Education and Research is a government ministry in Sweden responsible for matters relating to schools, universities, colleges, and research.

Solex College was a private for-profit college in Chicago, Illinois. The college enrolled over 2,000 students (2013-2014) and was one of the largest schools in the Chicago area to enroll international F-1 visa students for its intensive English as a Second Language programs. SOLEX’s main administration building was located in Wheeling, Illinois.

There are numerous elementary, secondary, and higher institutions of learning in the Commonwealth of Pennsylvania, which is home to 500 public school districts, thousands of private schools, many publicly funded colleges and universities, and over 100 private institutions of higher education.

The Illinois Board of Higher Education (IBHE) is a state government agency that oversees higher education in the U.S. state of Illinois. The IBHE was created in 1961. Since 2012 the IBHE also permits and oversees business schools and other vocational schools, which were formerly overseen by the Illinois State Board of Education.

Joseph A. Garcia is an American politician. He served as the 48th Lieutenant Governor of Colorado from January 2011 to May 2016.

Union Junior/Senior High School is a small, public High School, located in Rimersburg, Clarion County. The school is part of the Union School District. The school campus is home to approximately 375 students and 30 Faculty Members. Students, at their choosing, have the opportunity to attend Clarion County Career Center if they desire to pursue a vocational trade.

The education system in Mississippi consists of elementary, middle, and high schools as well as boarding schools, public and private schools, and colleges and universities. 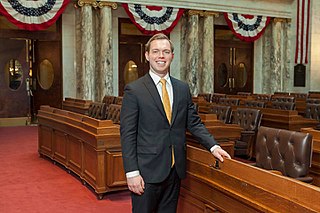 Adam Neylon is an American small business owner and Republican politician. He is a member of the Wisconsin State Assembly, representing central Waukesha County.

Hank M. Bounds, Ph.D., is an educator and the previous president of the University of Nebraska, where he was the administrator for the four campuses in the university. He has announced that he would step down from this position later in the summer of 2019 and return to the South with his family. He previously served as the commissioner of higher education in Mississippi. 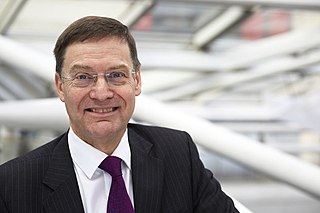 Professor Sir Chris Husbands is a British academic, educationist, university leader and public servant, who has been Vice-Chancellor of Sheffield Hallam University since January 2016.

Jesse H. Ruiz is an American politician and lawyer. He is currently serving as the Deputy Governor of Illinois for Education. He previously held the positions of Chairman of the Illinois State Board of Education, President of the Chicago Park District Board of Commissioners, and Vice President of the Chicago Board of Education. He also briefly served as the interim CEO of Chicago Public Schools.