The Department of Education's Instructional Television (SCDE ITV) team, part of the South Carolina Office of eLearning, [2] works with South Carolina Educational Television (ETV) to provide resources and services to South Carolina public schools, including instructional television (ITV) for distance learning. ITV is responsible for the selection of video-based resources, the development of local programming to support the state's K–12 curriculum, and the scheduling of approved resources. ETV provides production and technical delivery services to support instructional programming. K-12 and professional development programming are now delivered both by broadcast through the ETV satellite system and online via StreamlineSC. [3] ITV has produced with ETV award-winning[ which? ] series including Project Discovery and Eye Wonder. South Carolina focused resources including Detective Bonz, the SC History Mystery and Idella Bodie's SC Women Series are utilized to support the curriculum.

The state superintendent of education is elected at-large and serves a term of four years.

The South Carolina State Board of Education is composed of one representative from each of the sixteen South Carolina Judicial Circuit Courts. County representatives for each circuit are responsible for electing their circuit's board representative whose term ends after four consecutive years. Any person who is a registered elector in the State and who has taken the oath of office as defined by the Constitution of South Carolina is eligible for board membership. [4]

Inez Moore Tenenbaum is an American attorney and politician from South Carolina who served as South Carolina Superintendent of Education and as Chair of the United States Consumer Product Safety Commission. In 2016 she joined a law firm. She is a member of the Democratic Party.

Henry Dargan McMaster is an American politician, attorney and member of the Republican Party who has been the 117th governor of South Carolina since January 24, 2017.

The South Carolina Law Review is a student-edited law review that was established in 1937. It covers South Carolina law and commentary on the United States Court of Appeals for the Fourth Circuit. It also publishes the winning essays from the Warren E. Burger Writing Competition, which is sponsored by the American Inns of Court Foundation. In 2008 the journal began to experiment with peer review.

Mitchell McGeever "Mick" Zais is an American education official and former general who served as the acting United States secretary of education. He previously served as the 17th South Carolina Superintendent of Education from 2011 to 2015. Before winning the election as superintendent, he served as President of Newberry College for ten years. Prior to that he reached the rank of Brigadier General in the United States Army.

Frank Sharp Holleman, III is an attorney and politician from South Carolina who was the Democratic Party's nominee for South Carolina Superintendent of Education in 2010 and is a former United States Deputy Secretary of Education.

The 2018 South Carolina gubernatorial election was held on November 6, 2018, to elect the Governor of South Carolina. Incumbent Republican Governor Henry McMaster, who took office after Nikki Haley resigned to become U.S. Ambassador to the United Nations, ran for election to a full term. The primary was held on June 12, with the Democrats nominating State Representative James E. Smith Jr. McMaster failed to win a majority of the vote, and then defeated John Warren in the Republican runoff on June 26. In the general election, McMaster defeated Smith, winning election to a full term.

Anti-LGBT curriculum laws, sometimes referred to as no promo homo laws, are laws approved by various U.S. states that prohibit or limit the mention or discussion of homosexuality and transgender identity in public schools. In theory, these laws mainly apply to sex ed courses, but they can also be applied to other parts of the school curriculum as well as to extracurricular activities and organizations such as gay–straight alliances. 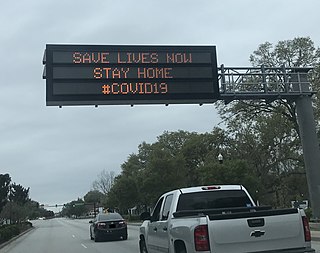 The COVID-19 pandemic was confirmed to have reached the U.S. state of South Carolina in March 2020. On April 2, 2020, DHEC announced that the virus had spread to all 46 counties in the state. During the month of June the seven-day moving average of new COVID-19 cases in South Carolina increased nearly five-fold, from 293 on June 1 to 1,398 on June 30, and continued to increase during July and into August. As of December 29, 2020, the South Carolina Department of Health and Environmental Control (DHEC) has confirmed 277,563 cases in the state, resulting in 4,804 confirmed deaths.

Justus Kendall Jillson (1839–1881) was an American educator and politician.

Molly Mitchell Spearman is a teacher and politician serving as the South Carolina Superintendent of Education. She took office in 2015 and her current term is scheduled to end in 2023. She is a Republican.