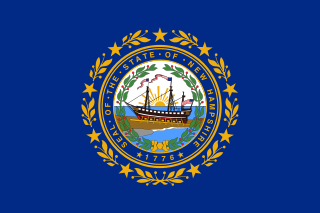 New Hampshire is a state in the New England region of the northeastern United States. It is bordered by Massachusetts to the south, Vermont to the west, Maine and the Atlantic Ocean to the east, and the Canadian province of Quebec to the north. New Hampshire is the 5th smallest by area and the 10th least populous U.S. state. 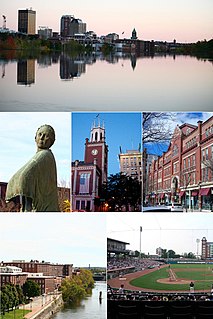 Manchester is a city in southern New Hampshire, United States. It is the most populous city in northern New England. As of the 2010 census the city had a population of 109,565, and in 2018 the population was estimated to be 112,525. 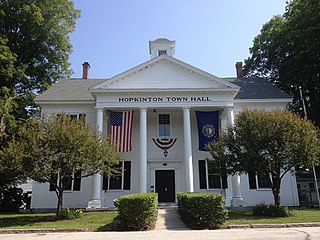 Hopkinton is a town in Merrimack County, New Hampshire, United States. The population was 5,589 at the 2010 census. The town has three distinct communities: Hopkinton village, mainly a residential area in the center of the town; Contoocook, the town's business hub, located in the north; and West Hopkinton, within the more agricultural portion of the town. The town is home to the Hopkinton State Fair, adjacent to Contoocook village, and to the historic Contoocook Railroad Depot and the Contoocook Railroad Bridge, the oldest covered railroad bridge in the United States. 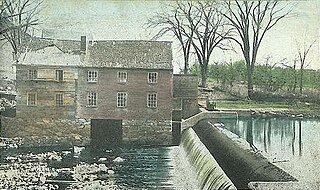 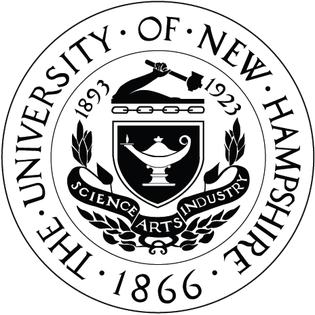 The University of New Hampshire (UNH) is a public research university with its main campus in Durham, New Hampshire. It was founded and incorporated in 1866 as a land grant college in Hanover in connection with Dartmouth College, moved to Durham in 1893, and adopted its current name in 1923.

The following is an alphabetical list of articles related to the U.S. State of New Hampshire.

The Petersfield School (TPS) is located in Petersfield, Hampshire, in southern England. The school opened on 20 June 1958 and remains the only state-funded secondary school in Petersfield. It received Arts College status in September 2004, and became an academy in July 2011. The current head teacher is Mr Mark Marande, with the previous being Mr Nigel Poole.

Plymouth State University (PSU), formerly Plymouth State College, is a public university in Plymouth, New Hampshire. It enrolls approximately 4,200 undergraduate students and 2,100 graduate students. The school was founded as Plymouth Normal School in 1871. Since that time it has evolved to a teachers college, a state college, and finally to a state university in 2003. PSU is part of the University System of New Hampshire.

The New England Association of Schools and Colleges, Inc. (NEASC) is the United States' regional accreditation association providing educational accreditation. NEASC serves over 2,000 public and independent schools, technical/career institutions, colleges, and universities in the six New England states, plus international schools in more than 65 nations. Its headquarters is in Burlington, Massachusetts. 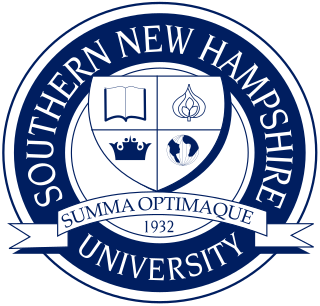 Southern New Hampshire University (SNHU) is a private university located between Manchester and Hooksett, New Hampshire. The university is accredited by the Commission on Institutions of Higher Education of the New England Association of Schools and Colleges, along with national accreditation for some hospitality, health, education and business degrees. With its online programs expanding, SNHU is one of the fastest-growing universities in the United States. SNHU uses an open enrollment policy that requires only a high school diploma or GED.

Trafalgar School is a coeducational secondary school located in Portsmouth, Hampshire, England. The school is on London Road in the Portsmouth northern sub district of Hilsea. The current comprehensive school, established in 1975, was the product of an amalgamation of four separate secondary schools in the west of the City of Portsmouth. Formerly a boys' school, the school became coeducational in September 2015.

Amery Hill School is an 11–16 secondary school with academy status set on a hill above the market town of Alton in Hampshire, England. Its head teacher is Stephen Mann.

New England is far from the center of the country, is relatively small, and is relatively densely populated. It was the birthplace of the Industrial Revolution in the United States as well as being one of the first regions to experience deindustrialization. Today, it is the center of education, research, high technology, finance, and medicine.

Werner D. Horn is an American politician born in Germany to Werner and Marilee Horn. He serves as a Republican member of the New Hampshire House of Representatives, representing Merrimack County District 2, the town of Hill and wards 1 and 2 of the city of Franklin. He was first elected in 2014 and served on the House Transportation Committee. Horn was re-elected in 2016 and continued to serve on House Transportation. With his second re-election in 2018, Rep Werner Horn serves on House Finance in Division II, responsible for the budgets of the New Hampshire Departments of Education, Fish and Game, Safety, and Transportation, the University System of New Hampshire, the Community College System of New Hampshire, and the Lottery Commission. On July 19, 2019, Horn made national news with a controversial post on Facebook saying that, “Owning slaves does not make you a racist.”

The 2020 New Hampshire gubernatorial election will be held on November 3, 2020, to elect the Governor of New Hampshire. Incumbent Republican Governor Chris Sununu is eligible to run for re-election to a third two-year term in office, and has declared his intent to do so.