The Arkansas Department of Education (ADE) is a cabinet-level agency of the Arkansas state government overseeing public education for K-12, higher education institutions, and career and technical education.

The Division of Elementary & Secondary Education (often abbreviated DESE), headquartered in Little Rock, [1] is the state education agency of Arkansas for public schools. Founded in 1931, its responsibilities include accrediting schools, assisting Arkansas schools and their school districts in developing their curricula, approving the textbooks used in state public schools, licensing teachers, and providing continuing education programs. [2] The ADE consists of five divisions: Division of Academic Accountability, Division of Fiscal and Administrative Services, Division of Human Resources, Division of Learning Services, and Division of Research and Technology. [2]

The department maintains the Arkansas Public School Computer Network for the purpose of providing internet access in public schools. [3] ADE also runs a distance learning program through its Distance Learning Center and partners with the Arkansas Educational Television Network on the Arkansas IDEAS portal, which offers professional development courses to improve academic and teaching knowledge and skills of its personnel. [4]

The Augmented Benchmark Examinations is a test required by the Arkansas Department of Education in support of NCLB. Starting with the 2007-08 school year, a criterion-referenced test mandated by the state was merged with the Stanford Achievement Test, Series 10 to form the Augmented Benchmark Examinations. It is administered in grades 3-8 in ELA and mathematics, additionally, grades 5 and 7 are tested in science. [5]

In support of the requirements for No Child Left Behind (NCLB) Act and its requirement for schools to produce Adequate Yearly Progress (AYP), the ADE developed Augmented Benchmark Examinations and its associated Arkansas Comprehensive Testing, Assessment, and Accountability Program (ACTAAP), which has criterion-referenced test (CRT) and norm-referenced test (NRT) components including the Augmented Benchmark Examinations at grades 3 - 8 and The Iowa Tests at grades 1 - 2 and 9. [5]

Per the ADE website, the federal government approved the state’s differentiated accountability model, which is named Smart Accountability, in January 2009. The model divides schools into the following categories:

The Smart Core curriculum is the assumed course of study for all students.

In contemporary education, mathematics education is the practice of teaching and learning mathematics, along with the associated scholarly research

Mathematics education in New York in regard to both content and teaching method can vary depending on the type of school a person attends. Private school math education varies between schools whereas New York has statewide public school requirements where standardized tests are used to determine if the teaching method and educator are effective in transmitting content to the students. While an individual private school can choose the content and educational method to use, New York State mandates content and methods statewide. Some public schools have and continue to use established methods, such as Montessori for teaching such required content. New York State has used various foci of content and methods of teaching math including New Math (1960s), 'back to the basics' (1970s), Whole Math (1990s), Integrated Math, and Everyday Mathematics.

The Union County Academy for Performing Arts is a full-time four-year public magnet high school located in Scotch Plains, in Union County, New Jersey, United States, on the Union County Vocational Technical Schools Campus. Its first year was the 2008–2009 school year. While the school originally offered two majors; theatre and dance; a program in technical theatre was added in the 2015–2016 school year. The school is part of the Union County Vocational Technical Schools (UCVTS), which serves students in all of Union County. The school has been accredited by the Middle States Association of Colleges and Schools Commission on Elementary and Secondary Schools since 2017. 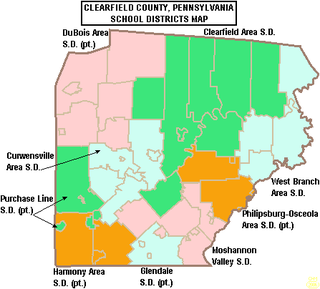 Curwensville Area Junior/Senior High School is a public high school located in the borough of Curwensville, Pennsylvania, United States. It serves students from most of south central Clearfield County. The school is part of the Curwensville Area School District.

Charleston High School is an accredited comprehensive public secondary school for students in grades 7 through 12, located in the city of Charleston, Arkansas, one of two county seats in Franklin County. The school is the sole high school managed by the Charleston School District.

Pea Ridge High School is a comprehensive public high school located in the fringe town of Pea Ridge, Arkansas, United States. The school provides secondary education for students in grades kindergarten through 12. It is one of nine public high schools in Benton County, Arkansas and the sole high school administered by the Pea Ridge School District.

Prairie Grove High School is an accredited comprehensive public high school serving students in grades nine through twelve in Prairie Grove, Arkansas, United States. Established in 1901, the school supports families in Prairie Grove and nearby unincorporated communities in Washington County and is the sole high school administered by the Prairie Grove School District.

Waldron High School is a comprehensive public secondary school located in Waldron, Arkansas, United States. The school educates more than 450 students annually in grades nine through twelve. Waldron is the larger of two public high schools in Scott County and is the sole high school administered by the Waldron School District.

Gurdon High School is an accredited comprehensive public high school serving students in grades six through twelve in the rural community of Gurdon, Arkansas, United States. It is one of three public high schools in Clark County and serves the communities of Gurdon, Okolona, and Whelem Springs. With more than 200 students, it is the sole high school of the Gurdon School District.

Paris High School is a comprehensive public secondary school located in Paris in Logan County in western Arkansas, United States, for students in grades nine through twelve. Paris is the sole high school administered by the Paris School District.

Bradley High School (BHS) is a comprehensive public junior/senior high school located in Bradley, Arkansas, United States. For the 2017-2018 school year, BHS serves more than 24 students in grades 7 through 12 and is supported by more than 15 educators on a full time equivalent basis. Bradley High is the smaller of two public high schools in Lafayette County and draws students from Bradley. It is one of three high schools of the Emerson-Taylor-Bradley School District. 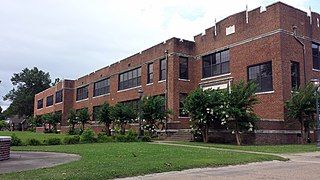 Brinkley High School (BHS) is a comprehensive public junior/senior high school located in Brinkley, Arkansas, United States. For the 2010–11 school year, BHS serves more than 300 students in grades 7 through 12 and is supported by more than 34 educators on a full time equivalent basis. Brinkley High serves portions of Monroe County and Woodruff County and draws students from Brinkley, McCrory, Cotton Plant, Wheatley, Fargo, Moro and Monroe. It is the sole high school of the Brinkley School District.

Williamsport Area HIgh School is a large, urban, public high school located in Williamsport, Lycoming County, Pennsylvania. The School is located at 2990 West 4th Street, Williamsport. In 2015, enrollment was reported as 1,475 pupils in 9th through 12th grades, with 51% of pupils eligible for a free lunch due to family poverty. Additionally, 17% of pupils received special education services, while less than 1% of pupils were identified as gifted. The school employed teachers. Per the PA Department of Education,97 % of the teachers were rated "Highly Qualified" under the federal No Child Left Behind Act. Williamsport Area High School is a federal Title I school. It is the sole high school operated by the Williamsport Area School District.