The Indiana Department of Education (IDOE) oversees primary and secondary education in the U.S. state of Indiana. The department is managed by the Indiana Superintendent of Public Instruction, an elected office held by Jennifer McCormick. The Superintendent serves as voting member and the chair of the Indiana State Board of Education, an eleven-member body with its ten other members appointed by the Governor of Indiana. The board sets statewide school policy and has limited control over curriculum.

The department's offices are located in Suite 600 of the South Tower of Indianapolis. [1] 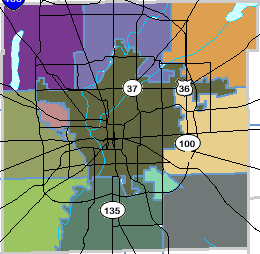 Indianapolis Public Schools (IPS) is the largest school district in Indianapolis, and the largest in the state of Indiana, with 31,885 students enrolled as of the 2019–20 school year and 70 schools in operation The district's headquarters are in the John Morton-Finney Center for Educational Services. 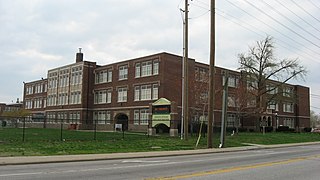 Crispus Attucks High School of the Indianapolis Public Schools in Indianapolis, in the U.S. state of Indiana is named for Crispus Attucks, an American patriot killed during what became known as the Boston Massacre. The school was built near Indiana Avenue northwest of downtown Indianapolis and opened on September 12, 1927, when it was the only public high school in the city designated specifically for African Americans. Despite the passage of federal and state school desegregation laws, Attucks was the city's only high school with a single-race student body in 1953, largely due to residential segregation, and remained a segregated school until in 1971. Attucks was converted to a junior high school in 1986, due to declining enrollment, and a middle school in 1993. It became a medical magnet high school in 2006, partially due to the school's proximity to the campus of the Indiana University School of Medicine and its associated hospitals.

The Indiana State Police is the statewide law enforcement agency for the U.S. state of Indiana. Indiana was the 12th state to offer protection to its citizens with a state police force.

Net Literacy is an Indianapolis based 501(c) non-profit organization that promotes computer and Internet literacy. The program is youth-run, with adult mentoring. All participants receive instruction for free.

The Carmel Clay School District is a public school district located in Carmel, Indiana, serving Carmel and Clay Township. The district operates 11 elementary schools, three middle schools and one high school, with an overall enrollment of 16,352 in the 2018–2019 school year. The district superintendent is Michael Beresford and the Board President is Michael Kerschner.

Benjamin Jackson Burris is best known for being a past president of Ball State University and held many different occupations. Burris was once a county attorney, politician, school administrator as well as the first assistant to the state superintendent of public instruction.

Indiana School for the Blind and Visually Impaired, or ISBVI, established in 1847 as the Indiana School for the Blind and also known as the Indiana Institution for the Education of the Blind, is a residential school for Indiana youth that are blind or have low vision in Indianapolis, USA. The school was founded in 1847. In 1930 it was relocated to its present location. The school added the "and Visually Impaired" to its name in 2007 and continues to use it today, despite "students who are blind or have low vision" being the currently accepted term. Students are able to attend the school from pre-school to high school, up to age 22. The current student population is estimated between 150 and 175 students; there are also an equal number of educators, maintenance, outreach, administrators and residential staff. The current superintendent of ISBVI, James Durst, does not actually hold valid Indiana licensure to be a superintendent and is therefore officially the Chief Executive Officer (CEO) of the school instead. The Lions Clubs of Indiana support the institution as one of their state projects through monetary donations and volunteerism. ISBVI has a youth Lions Club called the Indiana School for the Blind and Visually Impaired Leo Club. Their colors are green and white. Their mascot is the rocket. They play sports such as swimming, cheerleading, wrestling, goalball, and track and field.

Cleo Walter Blackburn was an American educator. He was the founder and CEO for The Fundamental Board of Education and a member of the fraternity Kappa Alpha Psi, the National Association for the Advancement of Colored People (NAACP) and the Indianapolis Urban League.

Indiana is a public artwork by Retta T. Matthews of Arlington, Indiana that was originally displayed in the Indiana State Building at the 1893 Chicago World's Fair. The sculpture is currently located on the fourth floor of the Indiana Statehouse in downtown Indianapolis, Indiana, USA. 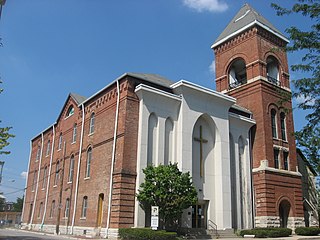 The Bethel A.M.E. Church, known in its early years as Indianapolis Station or the Vermont Street Church, is a historic African Methodist Episcopal Church in Indianapolis, Indiana. Organized in 1836, it is the city's oldest African-American congregation. The three-story church on West Vermont Street dates to 1869 and was added to the National Register in 1991. The surrounding neighborhood, once the heart of downtown Indianapolis's African American community, significantly changed with post-World War II urban development that included new hotels, apartments, office space, museums, and the Indiana University–Purdue University at Indianapolis campus. In 2016 the congregation sold their deteriorating church, which will be used in a future commercial development. The congregation built a new worship center at 6417 Zionsville Road in Pike Township, Marion County, Indiana.

Abraham Crum Shortridge was an American educator who was superintendent of the Indianapolis Public Schools and the second president of Purdue University.

George Washington Hoss was an American educator serving many positions at several institutions. Hoss was most notable for being an Indiana Superintendent of Public Instruction and the Kansas State Normal School's (KSN) second president. 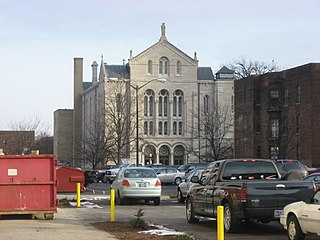 Roberts Park Methodist Episcopal Church, whose present-day name is Roberts Park United Methodist Church, was dedicated on August 27, 1876, making it the oldest church remaining in downtown Indianapolis. Diedrich A. Bohlen, a German-born architect who immigrated to Indianapolis in the 1850s, designed this early example of Romanesque Revival architecture. The church is considered one of Bohlen's major works. Constructed of Indiana limestone at Delaware and Vermont Streets, it has a rectangular plan and includes a bell tower on the southwest corner. The church is known for its interior woodwork, especially a pair of black-walnut staircases leading to galleries (balconies) surrounding the interior of three sides of its large sanctuary. The church was added to the National Register of Historic Places on August 19, 1982. It is home to one of several Homeless Jesus statues around the world, this one located behind the church on Alabama Street. 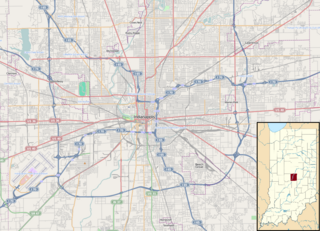