Pago Pago is the territorial capital of American Samoa. It is in Maoputasi County on Tutuila, which is American Samoa's main island. 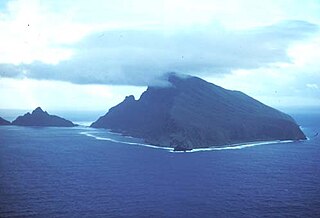 The Samoan Islands are an archipelago covering 3,030 km2 (1,170 sq mi) in the central South Pacific, forming part of Polynesia and of the wider region of Oceania. Administratively, the archipelago comprises all of the Independent State of Samoa and most of American Samoa. The land masses of the two Samoan jurisdictions are separated by 64 km (40 mi) of ocean at their closest points. 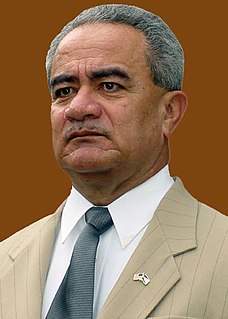 Togiola Talalelei A. Tulafono is an American Samoan politician and lawyer who served as the 56th Governor of American Samoa. He is a member of the Democratic Party. He had previously served as lieutenant governor, taking this position on January 3, 1997.

Ofu and Olosega are parts of a volcanic doublet in the Manu‘a Island Group, which is part of American Samoa in the Samoan Islands. These twin islands, formed from shield volcanoes, have a combined length of 6 km and a combined area of 12 square kilometers. Together, they have a population of about 500 people. Geographically, the islands are volcanic remnants separated by the narrow, 137-meter-wide (449-foot)) Āsaga Strait, composed of shallow-water coral reef. Before 1970, people crossed between the two islands by waiting until low tide and then wading across the shallow water of the strait. Since 1970, there has been a bridge over the strait, providing a single-lane road that connects the two islands. 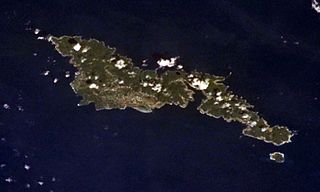 Tutuila is the main island of American Samoa, and is part of the archipelago of Samoan Islands. It is the third largest island in the Samoan Islands chain of the Central Pacific. It is located roughly 4,000 kilometers (2,500 mi) northeast of Brisbane, Australia and lies over 1,200 kilometers (750 mi) to the northeast of Fiji. It contains a large, natural harbor, Pago Pago Harbor, where Pago Pago, the capital of American Samoa, is situated. Pago Pago International Airport is also located on Tutuila. The island’s land expanse is about 68% of the total land area of American Samoa. With 56,000 inhabitants, it is also home to 95% of the population of American Samoa. The island has six terrestrial and three marine ecosystems.

Poloa is a village in American Samoa. It is located at the west side of Tutuila in the Alataua District. The village has 193 residents in 2010. The main denominations in the area are Methodist and Christian. Poloa has one elementary school. It is located in Lealataua County.

Utulei is a village in Maoputasi County, in the Eastern District of Tutuila, the main island of American Samoa. Utulei is traditionally considered to be a section of Fagatogo village, the legislative capital of American Samoa, and is located on the southwest edge of Pago Pago Harbor. Utulei is the site of many local landmarks: The A. P. Lutali Executive Office Building, which is next to the Feleti Barstow Library; paved roads that wind up to a former cablecar terminal on Solo Hill; the governor's mansion, which sits on Mauga o Alii, overlooking the entrance to Goat's Island, and the lieutenant governor's residence directly downhill from it; the Lee Auditorium, built in 1962; American Samoa's television studios, known as the Michael J. Kirwan Educational Television Center; and the Rainmaker Hotel. Utulei Terminal offers views of Rainmaker Mountain.

Leone is a village on the south-west coast of Tutuila Island, American Samoa. Leone was the ancient capital of Tutuila Island. Leone was also where the Samoan Islands’ first missionary, John Williams, visited on October 18, 1832. A monument in honor of Williams has been erected in front of Zion Church. Its large church was the first to be built in American Samoa. It has three towers, a carved ceiling and stained glass. Until steamships were invented, Leone was the preferred anchorage of sailing ships which did not risk entering Pago Pago Harbor. Much early contact between Samoans and Europeans took place in Leone.

Nu'uuli is a village on the central east coast of Tutuila Island, American Samoa. It is located on a peninsula several miles up from Pago Pago International Airport. Nu’uui is located between Pago Pago International Airport and Coconut Point. It is a shopping district which is home to stores such as South Pacific Traders, Nu’uuli Shopping Center, Aiga Supermarket and many more shops. 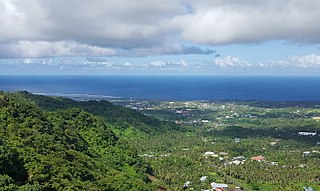 Tafuna is a village on the east coast of Tutuila Island, American Samoa. It is located on a mile north of Pago Pago International Airport and one mile south of Nu'uuli, American Samoa. The Ottoville district is a part of Tafuna. Near the Catholic church at Ottoville is an archeological park containing a well-preserved ancient Polynesian mound as well as a rainforest reserve. Tafuna is located on the Tafuna Plain, which is the largest flatland on the island of Tutuila. 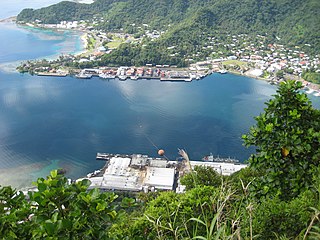 Pago Pago Harbor on Tutuila Island in American Samoa is one of the world's largest natural harbors. The capital, Pago Pago is located on the inner reaches of the harbor, close to its northwesternmost point. It has the highest annual rainfall of any harbor in the world. It is also considered one of the best and deepest deepwater harbors in the South Pacific Ocean or in Oceania as a whole. Pago Pago Bay is over 400 feet (120 m) deep and two miles (3.2 km) long. As part of the Pago Volcano caldera, the harbor is 50% landlocked,

Faga'alu is a village in central Tutuila Island, American Samoa. It is also known as Faga‘alo. It is located on the eastern shore of Pago Pago Harbor, to the south of Pago Pago. American Samoa's lone hospital, Lyndon B. Johnson Tropical Medical Center, is located in Faga'alu. The village is centered around Fagaalu Stream.

Shalom Luani is an American football safety who is a free agent. He is better known worldwide for his association football career, having scored against Tonga in American Samoa's first-ever win in FIFA-sanctioned play. Luani, who now plays as a forward, scored twice for American Samoa in November 2011, making him the country's joint–top goalscorer of all time with fellow forward Ramin Ott.

Samoana High School (SHS) is a prominent high school in Utulei, a community in Maoputasi County, Eastern District, American Samoa. It is a part of the American Samoa Department of Education. 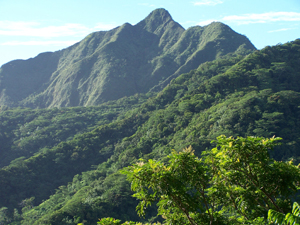 Matafao Peak is a mountain in American Samoa, on the island of Tutuila. With an elevation of 653 meters (2,142 ft), it is the highest peak on Tutuila Island. The mountain, like Rainmaker Mountain across Pago Pago Harbor, is a remnant of a volcanic plug and is part of the volcanic origins of the island. The mountain can be hiked from the high point of the Pago Pago-to-Fagasa Road. It is designated a National Natural Landmark above the 492-foot level, an area known as Matafao Peak National Natural Landmark.