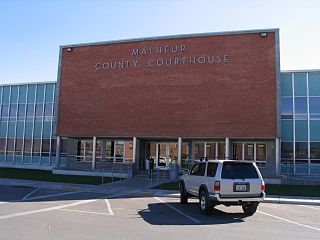 Malheur County is one of the 36 counties in the U.S. state of Oregon. As of the 2020 census, the population was 31,571. Its county seat is Vale, and its largest city is Ontario. The county was named after the Malheur River, which runs through the county. The word "malheur" is French for misfortune or tragedy. Malheur County is included in the Ontario, Oregon Micropolitan Statistical Area, which is also included in the Boise Combined Statistical Area. It is included in the eight-county definition of Eastern Oregon. 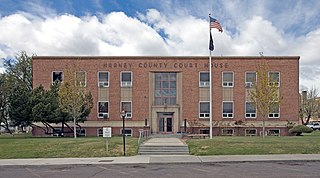 Harney County is one of the 36 counties in the U.S. state of Oregon. As of the 2020 census, the population was 7,495, making it the sixth-least populous county in Oregon. The county seat is Burns. Established in 1889, the county is named in honor of William S. Harney, a military officer of the period, who was involved in the Pig War and popular in the Pacific Northwest.

Riley is an unincorporated community in Harney County, Oregon, United States, located at the crossroads of U.S. Highway 395 and U.S. Highway 20, milepost 104, about 28 miles (45 km) west of Burns, the seat of Harney County. The elevation of Riley is 4,226 feet (1,288 m). The town presently consists entirely of two service establishments with attached apartments: a post office, and a general store with gas pump and garage service. It exists to serve the rural farming and ranching community that surrounds it, and highway travelers.

Frenchglen is an unincorporated community in Harney County, Oregon, United States. It is 60 miles (97 km) south of Burns on Oregon Route 205 and its population is approximately 12. 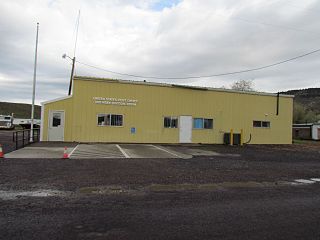 Drewsey is an unincorporated community in Harney County, in the U.S. state of Oregon. Drewsey is along the main stem of the Malheur River, about 45 miles (72 km) east of Burns, off U.S. Route 20. It has the ZIP Code of 97904.

Denio is a census-designated place (CDP) in Humboldt County, Nevada, along the Oregon state line in the United States. The Denio post office was originally north of the state line in Harney County, Oregon, but the residents moved the building into Nevada in the mid-20th century. The population of the CDP, which is entirely in Nevada, was 47 at the 2010 census; additional development considered to be Denio extends into Oregon. The CDP includes a post office, a community center, a library, and the Diamond Inn Bar, the center of the town's social life. Recreational activities in the Denio area include bird watching, photography, off road vehicle use, fishing, recreational black opal mining, rockhounding, hunting, visiting the hot springs, and camping on the Sheldon National Wildlife Refuge.

Arock is an unincorporated community in Malheur County, Oregon, United States. It is part of the Ontario, OR–ID Micropolitan Statistical Area. Arock is along Arock Road, 3 miles (5 km) north of U.S. Route 95 between Jordan Valley and Rome. Jordan Creek flows near Arock and joins the Owyhee River just west of Arock.

Crane is a census-designated place and unincorporated community in Harney County, Oregon, United States, northeast of Malheur Lake on Oregon Route 78. Its population was 129 at the 2010 census. 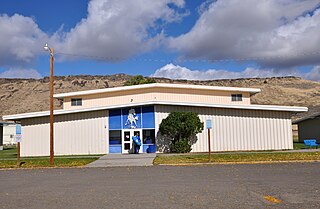 Crane Union High School is a public high school in Crane, Oregon, United States. It is a boarding school that serves students from a large geographic area.

Fields is an unincorporated community in Harney County, Oregon, United States, located 112 miles (180 km) south of Burns. It is the center of commerce for local ranches and the largest community between Denio, Nevada, 22 miles (35 km) to the south, and Frenchglen, Oregon, 52.4 miles (84.3 km) to the north.

Diamond is an unincorporated community in Harney County, Oregon, United States. Diamond is west of Oregon Route 205 and south of Malheur Lake, 52 miles (84 km) south-southeast of Burns by highway. Its post office is assigned ZIP code 97722.

The North Fork Malheur River is a 59-mile (95 km) tributary of the Malheur River in eastern Oregon in the United States. Rising in Big Cow Burn in the Blue Mountains, it flows generally south to join the larger river at Juntura. The upper 25.5 miles (41.0 km) of the river have been designated Wild and Scenic. This part of the river basin offers camping, hiking, and fishing opportunities in a remote forest setting. The lower river passes through Beulah Reservoir, which stores water for irrigation and has facilities for boaters. 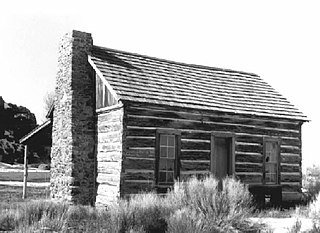 The Double-O Ranch Historic District is located west of Harney Lake in Harney County in southeastern Oregon, United States. At one time, the Double-O Ranch covered over 17,000 acres (69 km2). The ranch was owned by Bill Hanley, a well-known cattle baron and Bull Moose progressive. In 1941, the United States Government purchased most of the Double O Ranch property and added it to the Malheur National Wildlife Refuge. The two remaining Double-O Ranch buildings are now listed on the National Register of Historic Places.

An education service district (ESD) is a regional education unit in the U.S. state of Oregon. ESDs work to provide the various counties' school districts with a wide array of educational programs and services, many of which are too costly or limited in demand for a single location. By coordinating a program or service among multiple districts, Oregon ESDs are able to moderate costs.

Suntex is the name of an unincorporated community in Harney County, in the U.S. state of Oregon. It was established with the placement of a post office in the valley of Silver Creek west of Burns and north of U.S. Route 20.