Minnesota Department of Education (MDE) is a state agency of Minnesota. Its headquarters are in Roseville. [1] 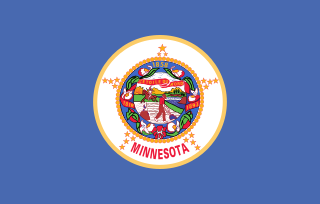 Minnesota is a state in the Upper Midwest, Great Lakes, and northern regions of the United States. Minnesota was admitted as the 32nd U.S. state on May 11, 1858, created from the eastern half of the Minnesota Territory. The state has many lakes, and is known as the "Land of 10,000 Lakes". Its official motto is L'Étoile du Nord.

Mary Cathryn Ricker is a labor leader, politician and educator in the United States, who has been named by Minnesota Governor-elect Tim Walz as his designee for Minnesota Commissioner of Education. Ricker previously served as a classroom teacher and as Executive Vice President of the American Federation of Teachers.

Timothy James Walz is an American politician who is the 41st governor of Minnesota, serving since January 2019. A member of the Democratic–Farmer–Labor Party, he served as the U.S. Representative for Minnesota's 1st congressional district from 2007 to 2019. The district comprises the state's southern end, running along the entire border with Iowa; it includes Rochester, Austin, Winona and Mankato. 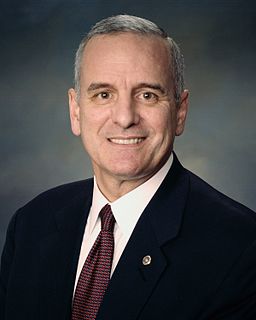 Alice Maria Seagren is an American politician in the state of Minnesota. She served in the Minnesota House of Representatives. 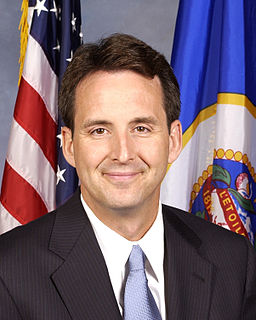 Timothy James Pawlenty is an American businessman and politician. He was a Republican politician who served as the 39th Governor of Minnesota (2003–2011). He previously served in the Minnesota House of Representatives (1993–2003), where he was majority leader for two terms. In 2011, he entered the campaign for the Republican presidential nomination and later was a potential vice presidential nominee before serving as co-chair of Mitt Romney's campaign.

The Minnesota Department of Transportation oversees transportation by all modes including land, water, air rail, walking and bicycling in the U.S. state of Minnesota. The cabinet-level agency is responsible for maintaining the state's trunk highway system, funding municipal airports and maintaining radio navigation aids, and other activities. Carol Molnau, who served as Minnesota's lieutenant governor under Tim Pawlenty, led the department as Commissioner of Transportation from the start of the Pawlenty administration in 2003 until her February 2008 removal in the aftermath of the I-35W Mississippi River bridge collapse. Thomas K. "Tom" Sorel succeeded her as commissioner and was reappointed when Mark Dayton became governor. Sorel has resigned from his position effective December 1, 2012, and his deputy commissioner, Bernard J. "Bernie" Arseneau, was appointed to act as interim commissioner. On December 15, 2012, Governor Mark Dayton announced that Charlie Zelle, CEO of Jefferson Lines, would be MnDOT's next commissioner, effective January 15, 2013.

The 2006 Minnesota gubernatorial election took place on November 7, 2006. Incumbent Tim Pawlenty was endorsed by the state Republican convention on June 2, 2006, while the state Democratic–Farmer–Labor convention endorsed Mike Hatch on June 10, 2006. The party primaries took place on September 12, 2006, with Hatch defeating DFL challengers Becky Lourey and Ole Savior and incumbent Pawlenty defeating Sue Jeffers. In the November 7 general election Pawlenty received a plurality of the votes, defeating Hatch by a margin of one percent. As of 2019, it is the most recent time a Republican was elected governor of Minnesota, or won any statewide race.

Rebecca Otto is an American politician who served as State Auditor of Minnesota from 2007 to 2019. Affiliated with the Minnesota Democratic-Farmer-Labor Party (DFL), she served in the Minnesota House of Representatives from 2003 to 2005 and on the Forest Lake School Board.

Nora Bayly Slawik is a Minnesota politician, serving as Chairwoman of the Metropolitan Council and previously served as Maplewood Mayor and Minnesota State Representative. From 1997-98 and 2001-2012, she represented District 57A, and from 2003-2012, she represented District 55B, which includes portions of Ramsey and Washington counties and the cities of Maplewood and Oakdale in the eastern part of the Twin Cities metropolitan area. As Mayor of Maplewood, first elected in 2013 and re-elected in 2018, she oversaw economic redevelopment, increased public safety, and expansion of Maplewood’s public outdoor spaces. In 2018, she was appointed by Governor Tim Walz to serve as head of the Metropolitan Council, where she currently works. She also has a history of community service before her time in office, including her development of Juniper as their Project Manager for the Metropolitan Area Agency on Aging from 2016-17.

Eric John Magnuson is an American lawyer in private practice. He was the Chief Justice of the Minnesota Supreme Court from 2008 to 2010.

The 2010 Minnesota gubernatorial election was held on Tuesday, November 2, 2010 to elect the 40th Governor of the U.S. state of Minnesota for a four-year term to begin in January 2011. The general election was contested by the major party candidates State Representative Tom Emmer (R–Delano), former U.S. Senator Mark Dayton (DFL), and Independence Party candidate Tom Horner. After a very close race, Dayton was elected governor. Emmer would be elected to the United States House of Representatives four years later.

Michelle Louise Helene Fischbach is an American attorney and politician who served as the 49th lieutenant governor of Minnesota, from 2018 to 2019. She previously served as the first female president of the Minnesota Senate. A Republican, she was first elected to the state senate in 1996, where she represented portions of Benton County and Stearns County. In January 2018, as president of the Senate, Fischbach automatically became lieutenant governor following the resignation of Tina Smith.

Paul M. Torkelson is a Minnesota politician and member of the Minnesota House of Representatives. A member of the Republican Party of Minnesota, he represents District 16B, which includes all or portions of Brown, Redwood and Renville counties in the southwestern part of the state. He is also a fourth-generation Watonwan County corn, soybean and pork farmer, with family roots in the area since 1878, and a former music teacher. 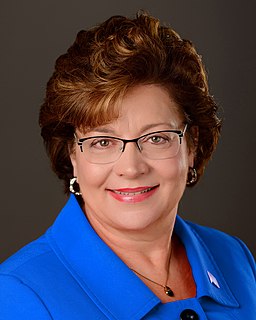 Carla J. Nelson is a Minnesota politician and member of the Minnesota Senate. A member of the Republican Party of Minnesota, she represents District 26, which includes portions of Olmsted County in the southeastern part of the state.

Ken Martin is an American political figure from Minnesota. He is currently Chairman of the Minnesota Democratic-Farmer-Labor (DFL) Party, President of the Association of State Democratic Committees, and a Vice Chair of the Democratic National Committee.

Jeff Johnson is an American politician from Minnesota. He was elected to the Minnesota House of Representatives in 2000 and served there from 2001 to 2007. Johnson left the legislature to run for state attorney general in 2006, but was defeated. Johnson now serves as Hennepin County commissioner for the 7th district. He was elected as the Republican National Committeeman from Minnesota in April 2011. Johnson was the Republican nominee for governor of Minnesota in 2014, losing to incumbent Mark Dayton, and again in the 2018 Minnesota gubernatorial election, losing to the Democratic nominee, U.S. Representative Tim Walz.

The 2018 Minnesota gubernatorial election took place on November 6, to elect the 41st Governor of Minnesota as incumbent governor Mark Dayton chose not to run for re-election for a third term. The Democratic nominee was congressman Tim Walz from Minnesota's 1st congressional district while the Republicans nominated Hennepin County commissioner Jeff Johnson. The Independence Party of Minnesota didn't field a candidate for the first time since 1994. Going into the election the polls showed Walz ahead and the race was characterized as lean or likely DFL.

Cannabis in Minnesota is not legal for recreational use.

Christine Jax was a commissioner of the Minnesota Department of Education from 1999 to 2003. In 2012 she ran for a school board position in Palm Beach County, Florida, and in 2015 she became the Dean and Chief Academic Officer for Digital Media Arts College, an art and design college in Boca Raton, Florida.