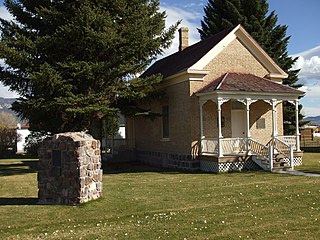 Wayne County is a county located in the U.S. state of Utah. As of the 2010 census, the population was 2,778, making it the fourth-least populous county in Utah. Its county seat is Loa. The county was formed from Piute County in 1892, and gets its name from Wayne County, Tennessee. 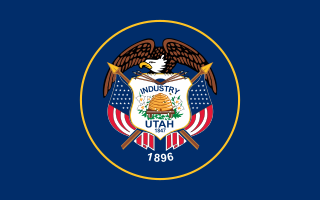 Utah is a state in the western United States. It became the 45th state admitted to the U.S. on January 4, 1896. Utah is the 13th-largest by area, 31st-most-populous, and 10th-least-densely populated of the 50 United States. Utah has a population of more than 3 million according to the Census estimate for July 1, 2016. Urban development is mostly concentrated in two areas: the Wasatch Front in the north-central part of the state, which contains approximately 2.5 million people; and Washington County in Southern Utah, with over 160,000 residents. Utah is bordered by Colorado to the east, Wyoming to the northeast, Idaho to the north, Arizona to the south, and Nevada to the west. It also touches a corner of New Mexico in the southeast. 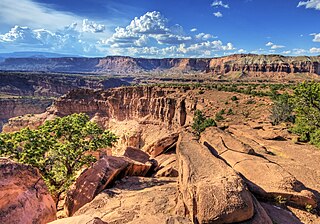 Capitol Reef National Park is an American national park located in south-central Utah. The park is approximately 60 miles (97 km) long on its north–south axis but an average of just 6 miles (9.7 km) wide. The park was established in 1971 to preserve 241,904 acres of desert landscape and is open all year with May through September being the highest visitation months.

Loa is a town in, and the county seat of, Wayne County, Utah, United States, along State Route 24. The population was 572 at the 2010 census.

Lyman is a town along State Route 24 in Wayne County, Utah, United States. The population was 258 at the 2010 census.

Fremont is a census-designated place in northwestern Wayne County, Utah, United States. It lies along State Route 72 just northeast of the town of Loa, the county seat of Wayne County. To the north is Fishlake National Forest. Fremont's elevation is 7,218 feet (2,200 m). The population was 145 at the 2010 census.

The Great Salt Lake, located in the northern part of the U.S. state of Utah, is the largest salt water lake in the Western Hemisphere, and the eighth-largest terminal lake in the world. In an average year the lake covers an area of around 1,700 square miles (4,400 km2), but the lake's size fluctuates substantially due to its shallowness. For instance, in 1963 it reached its lowest recorded size at 950 square miles (2,460 km²), but in 1988 the surface area was at the historic high of 3,300 square miles (8,500 km2). In terms of surface area, it is the largest lake in the United States that is not part of the Great Lakes region. 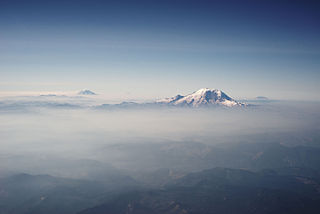 Escalante is a city in central Garfield County, Utah, United States located along Utah Scenic Byway 12 (SR-12) in the south central part of the state. As of the 2010 census, there were 797 people residing in the city.

Bicknell is a town along State Route 24 in Wayne County, Utah, United States. As of the 2010 census, the town population was 327. 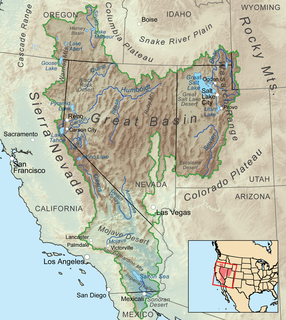 The Great Basin is the largest area of contiguous endorheic watersheds in North America. It spans nearly all of Nevada, much of Oregon and Utah, and portions of California, Idaho, and Wyoming. It is noted for both its arid climate and the basin and range topography that varies from the North American low point at Badwater Basin to the highest point of the contiguous United States, less than 100 miles (160 km) away at the summit of Mount Whitney. The region spans several physiographic divisions, biomes, ecoregions, and deserts. 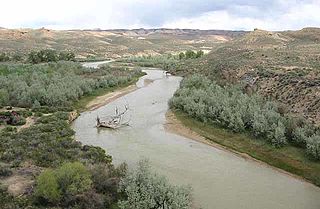 White River is a river, approximately 195 miles (314 km) long, in the U.S. states of Colorado and Utah and is a tributary of the Green River.

U.S. Route 89 is a north–south United States Highway with two sections, and one former section. The southern section runs for 848 miles from Flagstaff, Arizona, to the southern entrance of Yellowstone National Park. The northern section runs for 404 miles from the northern entrance of Yellowstone National Park in Montana, ending at the Canada–US border. Unnumbered roads through Yellowstone connect the two sections. Before 1992, U.S. Highway 89 was a Canada to Mexico, border-to-border, highway that ended at Nogales, Arizona, on its southern end.

Boulder Mountain in Utah, USA makes up half of the Aquarius Plateau of South Central Utah in Wayne and Garfield counties. The mountain rises to the west of Capitol Reef National Park and consists of steep slopes and cliffs with over 50,000 acres (200 km²) of rolling forest and meadowlands on the top. The mountain has a nearly flat summit of roughly 70 square miles. The mountain is the highest timbered plateau in North America and is part of the Dixie National Forest.

Fremont River is 95-mile (153 km) long river in southeastern Utah, United States that flows from the Johnson Valley Reservoir, which is located on the Wasatch Plateau near Fish Lake, southeast through Capitol Reef National Park to the Muddy Creek near Hanksville where the two rivers combine to form the Dirty Devil River, a tributary of the Colorado River. 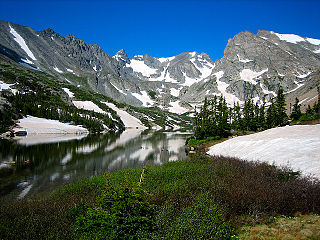 Naomi Peak, or Mount Naomi, is the highest peak in the Bear River Range in northern Utah and southern Idaho, United States. 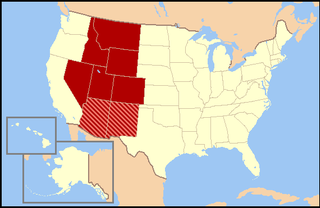 Crisman is a census-designated place (CDP) in Boulder County, Colorado, United States. The population as of the 2010 Census was 186.

The Lake Mountains are a 15-mile-long (24 km) mountain range located on the western edge of the Utah Valley in northwestern Utah County, Utah, United States. The range forms the northwest border of Utah Lake, and its proximity allows its use for communication towers, mostly in its north section, bordering Eagle Mountain. 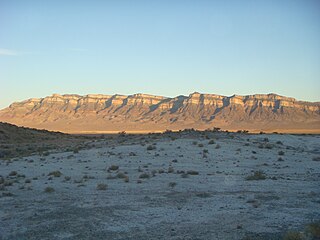