Thousand Oaks Transit (TOT) is Thousand Oaks, California's transportation service, providing local routes that serve the need of those commuting within the city itself.

The Green Line is a 28.6-mile (46.0 km) light rail line in Dallas, United States, operated by the Dallas Area Rapid Transit authority (DART). The US$1.7 billion project opened in phases, starting in 2009. It operates in addition to the Blue, Red, and Orange lines.

The Green Line is a rapid transit line on the Chicago Transit Authority's "L" system. It is the only completely elevated route in the entire system; all other routes either have underground sections or sections at grade. It utilizes the system's oldest segments, extending 20.695 miles (33.305 km) with 30 stops between Oak Park (Harlem/Lake) and Chicago's West Side, to the Loop, and then to the South Side and West Englewood (Ashland/63rd) and Woodlawn.

Oak Grove is a rapid transit station in Malden, Massachusetts. It serves the MBTA Orange Line, and located in northern Malden just south of the Melrose border. The northern terminus of the Orange Line, Oak Grove has a 788-space park and ride lot serving nearby residential communities. It is also served by four MBTA Bus routes and has secure cages for bicycle storage. Like all Orange Line stations, Oak Grove is accessible.

Oakville Transit is the public transportation provider in Oakville, Ontario, Canada since 1972. It is a department of the town and a member of the Canadian Urban Transit Association. It offers the typical conventional bus service, and a para-transit service, called care-A-van, for those unable to use the conventional service. The care-A-van takes riders directly to the address they desire.

Royal Oak is an elevated station on the Expo Line of Metro Vancouver's SkyTrain rapid transit system. The station is located at the intersection of Beresford Street and Royal Oak Avenue in Burnaby, British Columbia, a short walk south of Kingsway and Imperial Avenue. 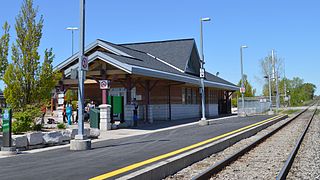 Mount Joy GO Station is a railway station and bus station in the GO Transit network located in the City of Markham, Ontario, Canada. It is located in the community of Mount Joy, north of the old town of Markham, at the intersection of Markham Road and Bur Oak Avenue and is a stop on the Stouffville line train service. 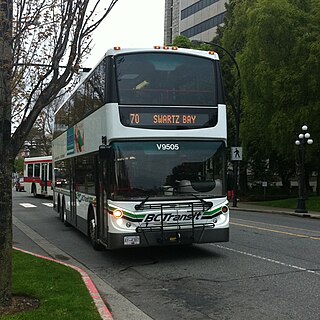 Marine Drive is an elevated station on the Canada Line of Metro Vancouver's SkyTrain rapid transit system. The station is located at the intersection of Cambie Street and SW Marine Drive in Vancouver, British Columbia.

Austin is a station on the Chicago Transit Authority's 'L' system. It is located between the Ridgeland and Central stations on the Green Line, which runs from Harlem/Lake and to Ashland/63rd and Cottage Grove. The station is located at the intersection of Austin Boulevard and Corcoran Place in the Austin neighborhood on Chicago's West Side and borders the village of Oak Park.

Greensborough(Census Tract Number 5350403.03) is a community in the city of Markham in the Regional Municipality of York in the Canadian province of Ontario.

Pasadena Transit, formerly known as Pasadena Area Rapid Transit System (ARTS), is a city-operated local bus service in Pasadena, California, United States. It was formed in 1994 coinciding with the kickoff of the World Cup at the Rose Bowl as a free service of the City of Pasadena. In 2003, fares were introduced. In December 2015, the agency changed its name to Pasadena Transit.

The R4 41st Ave is an express bus route with bus rapid transit elements in Metro Vancouver, British Columbia, Canada. Part of TransLink's RapidBus network, it replaced the 43 Express that travelled along 41st Avenue, a major east–west route that connects the University of British Columbia (UBC) to the SkyTrain system's Oakridge–41st Avenue station on the Canada Line and Joyce–Collingwood station on the Expo Line.

Southwest 6th & Pine and Southwest 5th & Oak stations are a pair of light rail stations on the MAX Green, Orange and Yellow Lines in Portland, Oregon. It is the 3rd stop southbound on the Portland Transit Mall extension.

Leduc Transit is public bus system operated by the City of Leduc and Leduc County in the Edmonton Capital Region of Alberta, Canada. The service began on September 8, 2014. The capital investment was 5.16 million dollars CAD. GreenTRIP, a provincial fund to assist public transportation projects, has contributed 3.44 million dollars CAD. The remainder will be divided 65-35 between the City and the County respectively.