Last updated April 08, 2020
This article is about the fireboat. For other uses, see 343 (disambiguation).

Three Forty Three is a Ranger 4200 class fireboat that serves the New York City Fire Department as Marine Company 1. [2] Designed by Robert Allan Ltd. and built to replace the 1954 John D. McKean, it was commissioned at 0900 on September 11, 2010, exactly nine years after the 2001 terrorist attacks. It is one of four New York fireboats currently in active service.

The boat's name comes from the number of FDNY members killed in the line of duty on September 11th, 2001. For days following the terrorist attack the only water available to the area was provided by the FDNY's Marine Units.

The Three Forty Three was built by Eastern Shipbuilding of Panama City, Florida, and is the largest single purpose fireboat built to date with the highest pumping capacity of any fireboat ever built. A sister vessel named Fire Fighter II was delivered and placed in service with Marine 9 in November 2010 to replace the 70-year-old Fire Fighter , which is listed on the National Register of Historic Places, and represented the city's first major investment in new fireboats in 50 years. [3]

The 140-foot, 500-ton, $27 million fast response boat is the country's largest fireboat, with a maximum speed of 18 knots. The Three Forty Three incorporates the latest technology available for marine vessels, including the capability of pumping 50,000 gallons of water per minute, nearly 30,000 gallons more than its predecessor. It has an operating crew of seven.

A fireboat is a specialized watercraft with pumps and nozzles designed for fighting shoreline and shipboard fires. The first fireboats, dating to the late 18th century, were tugboats, retrofitted with firefighting equipment. Older designs derived from tugboats and modern fireboats more closely resembling seafaring ships can both be found in service today. Some departments would give their multi-purpose craft the title of "fireboat" also.

John J. Harvey is a fireboat formerly of the New York City Fire Department in New York City, famed for returning to service following the September 11, 2001 attacks. She is among the most powerful fireboats ever built, capable of pumping up to 18,000 gallons of water a minute. 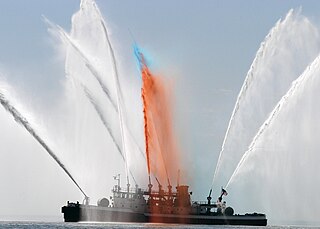 Fire Fighter is a fireboat which served the New York City Fire Department from 1938 through 2010, serving with Marine Companies 1, 8 & 9 during her career. The most powerful diesel-electric fireboat in terms of pumping capacity when built in 1938, the Fire Fighter fought more than 50 major fires during her career, including fires aboard the SS Normandie in 1942 and the SS El Estero in 1944, the 1973 collision of the Esso Brussels and SS Sea Witch, and the terrorist attacks on September 11, 2001.

John D. McKean is a fireboat that served the New York City Fire Department as Marine Company 1. She is named after John D. Mckean, who died in a 1953 steam explosion while trying to save a predecessor fireboat, the George B. McClellan. 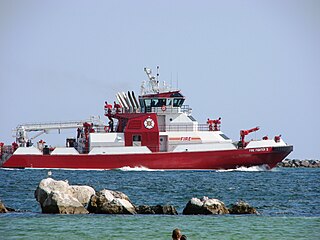 The Alki is a fireboat noted for its long service in Seattle, Washington. The boat was built in 1927 and is 123 feet (37 m) long. She was Seattle's third fireboat. She was built with gasoline engines, which were replaced with diesels in 1947. The new engine retrofit allowed the Alki to increase its pumping capacity from 12,000 gallons per minute to 16,200 gallons per minute. She replaced the Snoqualmie, Seattle's first fireboat. 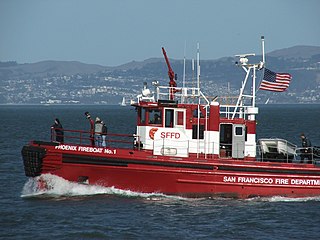 Phoenix is a fireboat owned by State of California and operated by the city of San Francisco in the San Francisco Bay since 1955. Phoenix is known for helping to save Marina District buildings from further destruction by fire following the 1989 Loma Prieta earthquake. Her worthy assistance resulted in a second vintage fireboat obtained for the city. Both Guardian and Phoenix are based at Firehouse No. 35 at Pier 22½ of the Port of San Francisco. Phoenix often leads parades of ships, and takes part in welcoming ceremonies.

The City of Long Beach, California started to operate a new fireboat, now known as the Protector, in May 2014. The vessel was known as Fireboat 20, until she was officially commissioned, on June 8, 2016. A sister ship will follow within a year. The two new vessels will replace the Challenger and the Liberty, commissioned in 1987. The earlier vessels had a troubled maintenance record. She will be one of the most powerful fireboats in the world.

The Mystic Connecticut fireboat Joseph B. Herman II was paid for with funds from the Port Security Grant Program, a special fund to combat terrorism. The fireboat cost $700,000. Following the attacks on September 11, 2001, the US Federal government began issuing generous grants to regional police, fire and other emergency handling agencies, to pay for infrastructure that could be used to combat a terrorist attack. 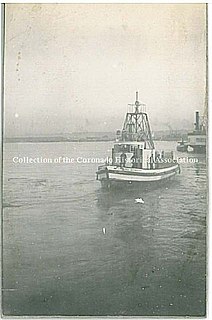 Fireboats in San Diego have been operated on San Diego Bay by the city of San Diego, California since the early 20th century, as well as by the Port of San Diego since its creation as a quasi-governmental agency serving the entire Bay in 1962.

The Deanna Jo is a small fireboat operated by the Alameda Fire Department. The city was able to acquire the vessel with the help of matching grants from the United States Department of Homeland Security, which required the city to only pay one quarter of the vessels capital cost. The Department has been providing Port Security grants since 2002, to provide vessels that, in addition to fighting fires, and rescuing boaters and swimmers, are equipped to counter biological and chemical weapons.

Since 2002, the Department of Homeland Security has provided Port Security Grants to ports within the United States, to build fireboats. These vessels are thought to help keep the entire United States safer, because, in addition to fighting local fires, they are all equipped to help counter nuclear fallout, chemical weapons and biological weapons. 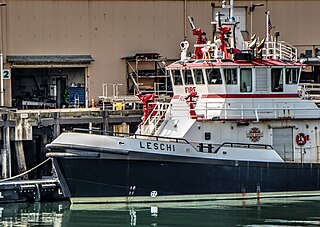 Leschi, named for the native American leader Chief Leschi, is a fireboat operated by the Seattle Fire Department. The ship was laid down in 2006 and commissioned in 2007; its sponsor was Sharon Nickels, wife of the then-mayor Greg Nickels.

M/V Marine One is a fireboat operated by the Seattle Fire Department (SFD). Marine One was laid down in 2006 and commissioned the same year. It is one of three fireboats operated by the SFD, the others being M/V Leschi and M/V Chief Seattle. All of these vessels respond to salt and fresh water situations.

William M. Feehan is a fireboat built for and operated by the New York City Fire Department (FDNY). Her namesake, William M. Feehan, was the oldest and most senior FDNY firefighter to perish in the line of duty on September 11, 2001. Her nameplate is carved from a steel plate salvaged from the collapse of the World Trade Center. The vessel's $4.7 million cost was largely covered by a FEMA Port Security Grant Program.

The Fire Department of New York operated the fireboat Smoke II from 1958 to 2008.

In December 16, 2016, Pittsburgh officials announced that half a million dollars had been budgeted to a acquire a fireboat that was eventually named the Sophie Masloff. The new vessel was built by Lake Assault Boats, a Wisconsin firm with experience building fireboats. She was named in honor of Pittsburgh's first female mayor.

Following the September 11 attacks in New York City, more than 500,000 people were unable to leave Lower Manhattan due to the closure of bridges and tunnels throughout the city. Within minutes of the first plane hitting the first tower, multiple fireboats from the New York City Fire Department rushed the scene. The United States Coast Guard coordinated a large convoy of merchant ships, tugboats, and ferries to evacuate the stranded and injured victims.