Shankar (Jayasurya), Ram (Kunchacko Boban) and Bhaskar (Indrajith) are three cousins from a royal family who always fight with each other from childhood. None of them allows others to prosper and creates trouble for each other in whatever they do. Their parents have taken money from a money lender called Dinakaran who has given the money on the lease of the place. When the debts increased, the three realized that they cannot repay the money and get back the palace and so they try to steal the papers from Dinakaran's house with the help of his daughters who are the girlfriends of the three kings. But Dinakaran catches them and hands them over to the police.

In the police lockup, they happen to hear from a blind man that there is a treasure hidden somewhere in the Mysore forest which belonged to their family. He says that this was hidden by Tipu Sultan centuries back. He can help them if they promise to give him a portion of it. But that night, his illness becomes worse and he dies on his way to the hospital, but he hands the three a map of the treasure before he leaves the cell.

The three kings leave to Mysore to find the treasure. Each of them takes a different route and tries to be there first and make the treasure their own, but ultimately they have join hands because each of them had only one portion of the map which they split while having a fight in the police lockup. Finally they finds the treasure but it turns out that everything was a forged play and they were part of a reality show which a popular channel organized. They all end up humiliated because cameras were following them every moment and caught all their fights on camera and broadcast it.

But during one of the fights they had inside the cave, it turns out that the three kings misplaced the gold idol kept by the channel and took the real golden idol itself. This makes them all rich and they take back the palace from the money lender. The three kings get married with their girlfriends and they gets three kids. In the final scene, it is shown that their three kids are also fighting with each other the same way their fathers did when they were kids showing us that the legacy continues.

The soundtrack of the film, composed by Ouseppachan, features 4 comic-genre songs. 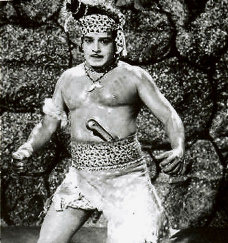 Palattu Koman is a 1962 Indian Malayalam-language film. The story of the film is based on the life of Palattu Koman, a pioneer of the Indian martial art form Kalaripayattu. The film was directed by Kunchacko (1912–1976) and produced by Geetha Salam. Sathyan, S. P. Pillai, Rushyendramani and Bahadoor were in the leading cast. The music director, Baburaj, wrote a critically acclaimed soundtrack that included the number "Poove Nalla Poove" sung by Santha P. Nair and penned by Vayalar Ramavarma. Palattu Koman, produced by Udaya Studios under the banner of Excel Productions Productions, and directed by Kunchacko, was an adaptation of a ballad from the Vadakkan Paatu. Following the grand success of the screen adaptation of a similar ballad, Unniyarcha (1961), the producers picked up another such ballad for Palattu Koman.

Swapnakoodu is a 2003 Indian Malayalam-language romantic comedy film directed by Kamal and written by Iqbal Kuttippuram and Kamal from a story by Kamal. It stars Prithviraj Sukumaran, Kunchacko Boban, Jayasurya, Meera Jasmine and Bhavana. The film's score and soundtrack were composed by Mohan Sithara. The film performed well at the box office, it was the third highest-grossing Malayalam film of the year, behind Balettan and CID Moosa. 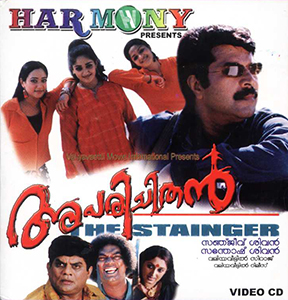 Aparichithan is a 2004 Malayalam horror film directed by Sanjeev Sivan in his directorial debut. It stars Kavya Madhavan, Karthika and Manya in lead roles, and Mammootty in an extended cameo role. The plot centers around Ouija board and spiritualism. Music was composed by Suresh Peters. 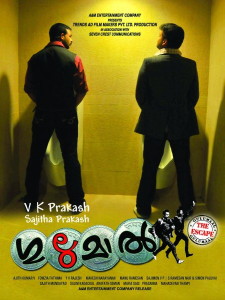 Gulumaal: The Escape is a 2009 Indian Malayalam-language comedy film directed by V. K. Prakash and written by Rajesh Y. V. It was shot in digital format by cinematographer Fowzia Fathima, and starred Kunchacko Boban and Jayasurya in leading roles. The film is an unofficial remake of classic Argentinian Crime-thriller film Nine Queens.

Padayani is a 1986 Indian Malayalam-language thriller film written and directed by T. S. Mohan and produced by Sukumaran. It stars Mohanlal, Mammootty, Shobhana and Devan. The film features music composed by A. T. Ummer. Ramesh, Sudhakaran and Rajasekharan are long-lost friends, who reunite to take revenge against the evildoer in their lives. The film was the debut of Indrajith Sukumaran, who plays the younger version of Ramesh (Mohanlal). 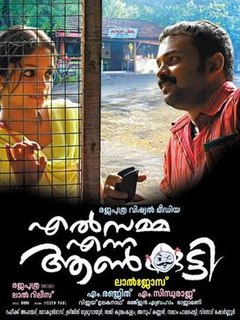 Elsamma Enna Aankutty is a 2010 Malayalam romantic comedy film directed by Lal Jose and written by M. Sindhuraj and Sangeeth Kollam starring Kunchacko Boban, Ann Augustine and Indrajith in the lead roles. The film was produced by Rejaputhra Visual Media and distributed by Lal Creations.

Traffic is a 2011 Indian Malayalam-language road thriller film written by brothers Bobby and Sanjay and directed by Rajesh Pillai. The film features an ensemble cast consisting of Sreenivasan, Kunchacko Boban, Rahman, Anoop Menon, Vineeth Sreenivasan, Sandhya, Roma, Remya Nambeesan, Asif Ali and Namitha Pramod. The film has its narrative in a hyperlink format. The film opened on 7 January 2011, to a positive reception. It is widely regarded as one of the defining movies of the Malayalam New Wave. A multi-narrative thriller that intertwines multiple stories around one particular incident, Traffic is inspired from an actual event that happened in Chennai. Owing to its critical and commercial success, Traffic was remade into Tamil as Chennaiyil Oru Naal, in Kannada as Crazy Star and is also remade in Hindi, with the same name. This was also the last film of the veteran actor Jose Prakash. 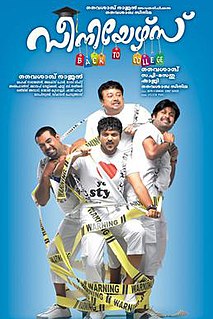 Seniors is a 2011 Indian Malayalam-language comedy thriller film directed by Vysakh and written by Sachi-Sethu. The plot follows four friends who return to their alma mater as students. It stars Jayaram, Kunchacko Boban, Biju Menon, and Manoj K. Jayan. The film features a score by Gopi Sundar and songs by Alphons Joseph, Jassie Gift, and Alex Paul. The film was released in India and the United Kingdom on 7 May 2011. The film was a blockbuster at the box office.

Pinnilavu is a 1983 Indian Malayalam-language drama film directed by P. G. Viswambharan and written by Thoppil Bhasi, based on the story of the same name by C. Radhakrishnan. It stars Madhu, Srividya, Mammootty, Mohanlal, Poornima Jayaram, Mukesh, Maniyan Pillai Raju, and Sukumari. The music was composed by Ilaiyaraaja. The film is about a fight of ethics between a father and son. 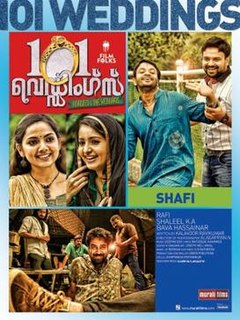 101 Weddings is a 2012 Malayalam romantic comedy film directed by Shafi and starring Kunchacko Boban, Jayasurya, Biju Menon, Samvrutha Sunil, and Bhama in the lead roles. The film is written by Kalavoor Ravikumar based on a story by the director. The film is produced by Shafi's brother Rafi Mecartin, Hasainar, and Shaleer, with audiography by M. R. Rajakrishnan under the banner of Film Folks and features music composed by Deepak Dev. 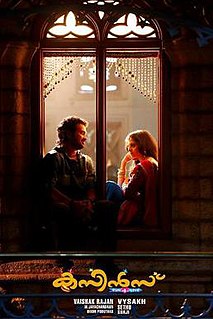 Cousins is a 2014 Indian Malayalam comedy film directed by Vysakh and scripted by Sethu. The story revolves around four cousins who undertake a journey with an intention, and followed by the issues they come across in between them. Vedhika and Nisha Aggarwal play the female leads, while Kalabhavan Shajon and Pradeep Rawat feature in supporting roles in the film. The film released on 19 December 2014. 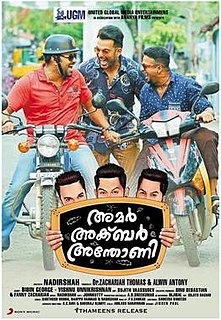 Amar Akbar Anthony is a 2015 Indian Malayalam-language comedy film directed by Nadirshah and written by Bibin George and Vishnu Unnikrishnan. It features Prithviraj Sukumaran, Jayasurya, Indrajith Sukumaran and Namitha Pramod as the main leads. The comedy scene of the film is significantly contributed by Asif Ali, Akanksha Puri and Ineya. The music is composed by Nadirshah, while the background music is given by Bijibal. It was released on 16 October 2015. 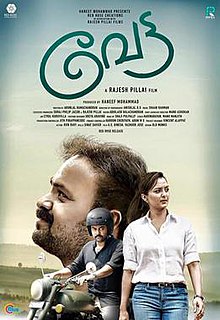 Vettah is a 2016 Indian Malayalam crime thriller film directed and co-produced by Rajesh Pillai. The film stars Kunchacko Boban, Manju Warrier, Indrajith Sukumaran and Sandhya. The script was written by Arunlal Ramachandran with A. V. Anoop co-producing the film. The director, Rajesh Pillai, died on 27 February 2016, the day after the film was released. 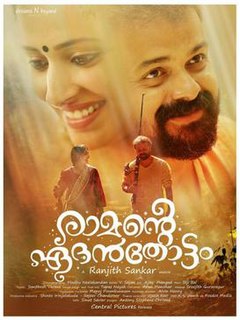 Ramante Edanthottam is a 2017 Indian Malayalam-language romantic drama film written, produced and directed by Ranjith Sankar. The film stars Kunchacko Boban in the title role. Filming began in February 2017 in Kochi and Vagamon. It was released in India on 12 May 2017. The film has achieved a cult status and is considered to be one of Ranjith Sankar’s best works. 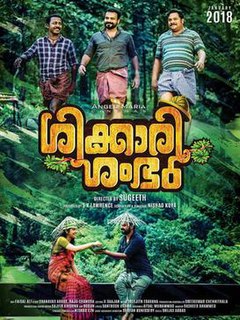 Anjaam Pathiraa is a 2020 Indian Malayalam-language crime thriller film written and directed by Midhun Manuel Thomas. The film stars Kunchacko Boban, Sharaf U Dheen, Unnimaya Prasad, Jinu Joseph, and Sreenath Bhasi in substantial roles. Sushin Shyam composed the music, while Shyju Khalid was the cinematographer. The plot follows a squad of police sleuths assisted by a consultant criminologist, Anwar Hussain, as they attempt to unveil the identity of a faceless killer who employs brutal tactics to slay his victims.