The 2018 Tournament was held in January 2019 due to conflicts with the availability of PPG Paints Arena.

Consolation game between Ferris State and BC was decided in a shootout for the tournament, however the game was officially a tie. BC def. Ferris in the shootout 2-1

On Day 1 (December 29), the Colgate Raiders defeated the Western Michigan Broncos 2-1, [2] and the Robert Morris Colonials beat the Penn State Nittany Lions by a margin of 4-2. [3]

On Day 2 (December 30), in the consolation game, the Western Michigan Broncos beat the Penn State Nittany Lions 4-1. [4] In the championship game the Colgate Raiders beat the Robert Morris Colonials 6-1, to win their first title. [5]

On Day 2 (December 28), in the consolation game the Bowling Green Falcons beat the Robert Morris Colonials 3-2. [8] In the championship game the Boston College Eagles beat the Penn State Nittany Lions 8-2, to win its first title. [9]

On Day 2 (December 29), in the consolation game, the Penn State beat the Ohio State Buckeyes 5-4. [12] In the championship game, the Robert Morris Colonials beat the Miami RedHawks 1-0, to win their first title. [13]

The total attendance for the inaugural games held on December 28 was listed as 11,663, while 10,797 turned out for the next day's games. The attendance total of 22,460 exceeded what had been hoped for by the event's planners, who estimated only 5,000 - 6,000 fans for each day of the games. [14] The inaugural Classic also took part during the 2012–13 NHL lockout, which may have helped increase interest in the event. [1] 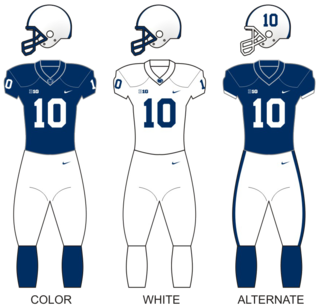 The 1947 Penn State Nittany Lions football team was an American football team that represented Pennsylvania State University as an independent during the 1947 college football season. In its 18th season under head coach Bob Higgins, the team compiled an undefeated 9–0–1 record, shut out six opponents, outscored opponents by a total of 332 to 40, and was ranked No. 4 in the final AP Poll. The team was 9–0 during the regular season and played No. 3 SMU to a tie in the 1948 Cotton Bowl Classic. The team played its home games in New Beaver Field in State College, Pennsylvania.

The 1946 Penn State Nittany Lions football team represented the Pennsylvania State University in the 1946 college football season. The team was coached by Bob Higgins and played its home games in New Beaver Field in State College, Pennsylvania. The team is notable for voting to cancel a scheduled game against the Miami Hurricanes rather than playing without African American players. 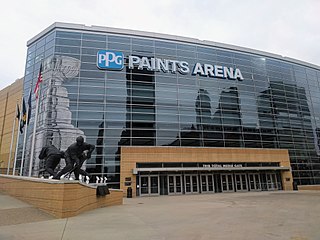 The Penn State–Pittsburgh football rivalry is a long-standing American college football rivalry between the Penn State Nittany Lions and Pittsburgh Panthers. The game played in 2019 was the 100th edition of the rivalry game. Penn State has not played more games against any other opponent, whereas Pitt has only played more against West Virginia University. After the rivalry resumed in 2016, it was branded "The Keystone Classic" with Peoples Natural Gas as its corporate sponsor. A four-game series between Pitt and Penn State ended in 2019 and there is no future game planned.

College Hockey Mid-America (CHMA) is an American Collegiate Hockey Association Division I ice hockey conference with teams in Ohio, Western Pennsylvania, and West Virginia. The league was formed in 2006 after members of the now defunct University Hockey League organized the league and moved from the ACHA's Division II to Division I.

The Robert Morris Colonials men's ice hockey team was a National Collegiate Athletic Association (NCAA) Division I college ice hockey program that represented Robert Morris University. The team played its home games at the Clearview Arena, located at the RMU Island Sports Center in Neville Township, Pennsylvania, United States. The Colonials were a member of the Atlantic Hockey Conference. Until the 2009–10 season, the Colonials were a member of College Hockey America.

Penn State Nittany Lions men's ice hockey, formerly known as the Penn State Icers, is a college ice hockey program that represents the Pennsylvania State University. Prior to the 2012–13 season the program was designated a club sport and competed at the ACHA Division I level. PSU was previously a member of the Eastern States Collegiate Hockey League (ESCHL, although the team competed as an independent ACHA D-I member for the 2011–12 season before moving to the NCAA D-I level. They play at the Pegula Ice Arena in University Park, Pennsylvania.

The Penn State Nittany Lions field hockey team is the intercollegiate field hockey program representing Pennsylvania State University. The school competes in the Big Ten Conference in Division I of the National Collegiate Athletic Association (NCAA), although it was also previously a member of the Atlantic 10 Conference (A-10). The Penn State field hockey team plays its home games at the Penn State Field Hockey Complex on the university campus in State College, Pennsylvania. The Nittany Lions captured the Association for Intercollegiate Athletics for Women (AIAW) national championship twice, in 1980 and 1981, and have won 10 regular-season conference titles as well as eight conference tournament championships. While Penn State has qualified for the NCAA tournament 30 times, and has made seven appearances in the semifinals and two in the championship game, it has never won the NCAA national championship. The team is currently coached by Charlene Morett.

The 1980 Fiesta Bowl was the tenth edition of the college football bowl game, played at Sun Devil Stadium in Tempe, Arizona on Friday, December 26. Part of the 1980–81 bowl game season, it matched the tenth-ranked Penn State Nittany Lions and the #11 Ohio State Buckeyes of the Big Ten Conference. A slight underdog, independent Penn State rallied in the second half to win, 31–19.

Richard Thomas "Trace" McSorley III is an American football quarterback for the Arizona Cardinals of the National Football League (NFL). He played college football at Penn State, and was drafted by the Baltimore Ravens in the sixth round of the 2019 NFL Draft.

The Windjammer Classic is an annual ice hockey tournament for college hockey teams, hosted by the University of Vermont and featuring one team from each of the other three NCAA Division I women's hockey conferences: College Hockey America (CHA), ECAC Hockey, and Western Collegiate Hockey Association (WCHA). The tournament is sponsored by The Windjammer and Upper Deck Pub in Burlington Vermont.

The 2018–19 Penn State Nittany Lions men's ice hockey season was the 12th season of play for the program and the 6th season in the Big Ten Conference. The Nittany Lions represented Pennsylvania State University and were coached by Guy Gadowsky, in his 8th season.