The threshold displacement energy is a materials property relevant during high-energy particle radiation of materials. The maximum energy

of the irradiating particle, the equation reduces to

In order for a permanent defect to be produced from initially perfect crystal lattice, the kinetic energy that it receives

must be larger than the formation energy of a Frenkel pair. However, while the Frenkel pair formation energies in crystals are typically around 5–10 eV, the average threshold displacement energies are much higher, 20–50 eV. [1] The reason for this apparent discrepancy is that the defect formation is a complex multi-body collision process (a small collision cascade) where the atom that receives a recoil energy can also bounce back, or kick another atom back to its lattice site. Hence, even the minimum threshold displacement energy is usually clearly higher than the Frenkel pair formation energy.

for all non-equivalent crystallographic directions [hkl]. Then

where the minimum and average is with respect to all angles in three dimensions.

, and an upper one where it is certainly formed

. [6] The difference between these two may be surprisingly large, and whether or not this effect is taken into account may have a large effect on the average threshold displacement energy. . [7]

An example molecular dynamics simulation of a threshold displacement event is available in 100_20eV.avi. The animation shows how a defect (Frenkel pair, i.e. an interstitial and vacancy) is formed in silicon when a lattice atom is given a recoil energy of 20 eV in the 100 direction. The data for the animation was obtained from density functional theory molecular dynamics computer simulations. [15]

Such simulations have given significant qualitative insights into the threshold displacement energy, but the quantitative results should be viewed with caution. The classical interatomic potentials are usually fit only to equilibrium properties, and hence their predictive capability may be limited. Even in the most studied materials such as Si and Fe, there are variations of more than a factor of two in the predicted threshold displacement energies. [7] [15] The quantum mechanical simulations based on density functional theory (DFT) are likely to be much more accurate, but very few comparative studies of different DFT methods on this issue have yet been carried out to assess their quantitative reliability.

The threshold displacement energies have been studied extensively with electron irradiation experiments. Electrons with kinetic energies of the order of hundreds of keVs or a few MeVs can to a very good approximation be considered to collide with a single lattice atom at a time. Since the initial energy for electrons coming from a particle accelerator is accurately known, one can thus at least in principle determine the lower minimum threshold displacement

energy by irradiating a crystal with electrons of increasing energy until defect formation is observed. Using the equations given above one can then translate the electron energy E into the threshold energy T. If the irradiation is carried out on a single crystal in a known crystallographic directions one can determine also direction-specific thresholds

There are several complications in interpreting the experimental results, however. To name a few, in thick samples the electron beam will spread, and hence the measurement on single crystals does not probe only a single well-defined crystal direction. Impurities may cause the threshold to appear lower than they would be in pure materials.

Particular care has to be taken when interpreting threshold displacement energies at temperatures where defects are mobile and can recombine. At such temperatures, one should consider two distinct processes: the creation of the defect by the high-energy ion (stage A), and subsequent thermal recombination effects (stage B).

The initial stage A. of defect creation, until all excess kinetic energy has dissipated in the lattice and it is back to its initial temperature T0, takes < 5 ps. This is the fundamental ("primary damage") threshold displacement energy, and also the one usually simulated by molecular dynamics computer simulations. After this (stage B), however, close Frenkel pairs may be recombined by thermal processes. Since low-energy recoils just above the threshold only produce close Frenkel pairs, recombination is quite likely.

Hence on experimental time scales and temperatures above the first (stage I) recombination temperature, what one sees is the combined effect of stage A and B. Hence the net effect often is that the threshold energy appears to increase with increasing temperature, since the Frenkel pairs produced by the lowest-energy recoils above threshold all recombine, and only defects produced by higher-energy recoils remain. Since thermal recombination is time-dependent, any stage B kind of recombination also implies that the results may have a dependence on the ion irradiation flux.

for a nuclear deposited energy of

for any nuclear deposited energy above

However, this equation should be used with great caution for several reasons. For instance, it does not account for any thermally activated recombination of damage, nor the well known fact that in metals the damage production is for high energies only something like 20% of the Kinchin-Pease prediction. [4]

The threshold displacement energy is also often used in binary collision approximation computer codes such as SRIM [22] to estimate damage. However, the same caveats as for the Kinchin-Pease equation also apply for these codes (unless they are extended with a damage recombination model).

Moreover, neither the Kinchin-Pease equation nor SRIM take in any way account of ion channeling, which may in crystalline or polycrystalline materials reduce the nuclear deposited energy and thus the damage production dramatically for some ion-target combinations. For instance, keV ion implantation into the Si 110 crystal direction leads to massive channeling and thus reductions in stopping power. [23] Similarly, light ion like He irradiation of a BCC metal like Fe leads to massive channeling even in a randomly selected crystal direction. [24] 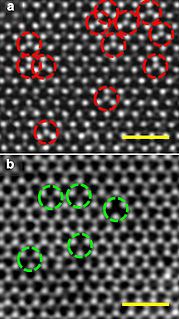 Crystallographic defects are interruptions of regular patterns in crystalline solids. They are common because positions of atoms or molecules at repeating fixed distances determined by the unit cell parameters in crystals, which exhibit a periodic crystal structure, are usually imperfect. 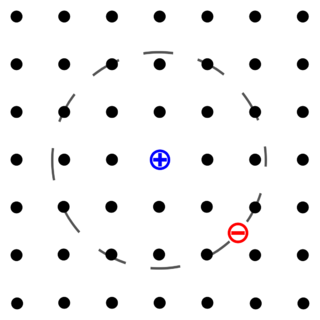 An exciton is a bound state of an electron and an electron hole which are attracted to each other by the electrostatic Coulomb force. It is an electrically neutral quasiparticle that exists in insulators, semiconductors and some liquids. The exciton is regarded as an elementary excitation of condensed matter that can transport energy without transporting net electric charge.

The Wigner effect, also known as the discomposition effect or Wigner's disease, is the displacement of atoms in a solid caused by neutron radiation. 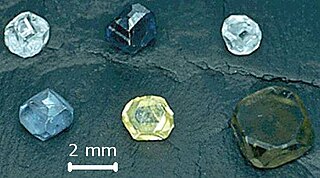 Imperfections in the crystal lattice of diamond are common. Such crystallographic defects in diamond may be the result of lattice irregularities or extrinsic substitutional or interstitial impurities, introduced during or after the diamond growth. The defects affect the material properties of diamond and determine to which type a diamond is assigned; the most dramatic effects are on the diamond color and electrical conductivity, as explained by the electronic band structure.

The λ (lambda) universality class is a group in condensed matter physics. It regroups several systems possessing strong analogies, namely, superfluids, superconductors and smectics. All these systems are expected to belong to the same universality class for the thermodynamic critical properties of the phase transition. While these systems are quite different at the first glance, they all are described by similar formalisms and their typical phase diagrams are identical.

Mott insulators are a class of materials that are expected to conduct electricity as predicted by conventional band theories, but these compounds turn out to be insulators. These insulators failed to be correctly described by band theories of solids due to strong electron–electron interactions, which are not considered in conventional band theory. Mott transition is a transition from a metal to an insulator, driven by the strong interactions between electrons. One of the simplest models that can capture Mott transition is Hubbard model. 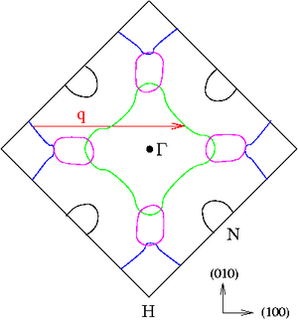 Spin-density wave (SDW) and charge-density wave (CDW) are names for two similar low-energy ordered states of solids. Both these states occur at low temperature in anisotropic, low-dimensional materials or in metals that have high densities of states at the Fermi level . Other low-temperature ground states that occur in such materials are superconductivity, ferromagnetism and antiferromagnetism. The transition to the ordered states is driven by the condensation energy which is approximately where is the magnitude of the energy gap opened by the transition. 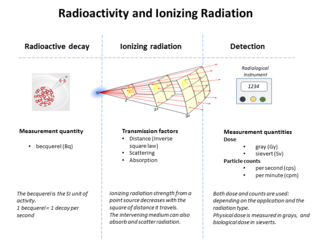 In nuclear and materials physics, stopping power is the retarding force acting on charged particles, typically alpha and beta particles, due to interaction with matter, resulting in loss of particle energy. Its application is important in areas such as radiation protection, ion implantation and nuclear medicine.

An interstitial defect is a type of point crystallographic defect where an atom of the same or of a different type, occupies a normally unoccupied site in the crystal structure. When the atom is of the same type as those already present they are known as a self-interstitial defect. Alternatively, small atoms in some crystals may occupy interstitial sites, such as hydrogen in palladium. Interstitials can be produced by bombarding a crystal with elementary particles having energy above the displacement threshold for that crystal, but they may also exist in small concentrations in thermodynamic equilibrium. The presence of interstitial defects can modify the physical and chemical properties of a material.

The hexatic phase is a state of matter that is between the solid and the isotropic liquid phases in two dimensional systems of particles. It is characterized by two order parameters: a short-range positional and a quasi-long-range orientational (sixfold) order. More generally, a hexatic is any phase that contains sixfold orientational order, in analogy with the nematic phase.

A collision cascade is a set of nearby adjacent energetic collisions of atoms induced by an energetic particle in a solid or liquid.

Stopping and Range of Ions in Matter (SRIM) is a group of computer programs which calculate interaction of ions with matter; the core of SRIM is a program Transport of ions in matter (TRIM). SRIM is popular in the ion implantation research and technology community and also used widely in other branches of radiation material science.

Swift heavy ions are a special form of particle radiation for which electronic stopping dominates over nuclear stopping. They are accelerated in particle accelerators to very high energies, typically in the MeV or GeV range and have sufficient energy and mass to penetrate solids on a straight line. In many solids swift heavy ions release sufficient energy to induce permanently modified cylindrical zones, so-called ion tracks. If the irradiation is carried out in an initially crystalline material, ion tracks consist of an amorphous cylinder. Ion tracks can be produced in many amorphizing materials, but not in pure metals, where the high electronic heat conductivity dissipates away the electronic heating before the ion track has time to form.

The binary collision approximation (BCA) signifies a method used in ion irradiation physics to enable efficient computer simulation of the penetration depth and defect production by energetic ions in solids. In the method, the ion is approximated to travel through a material by experiencing a sequence of independent binary collisions with sample atoms (nuclei). Between the collisions, the ion is assumed to travel in a straight path, experiencing electronic stopping power, but losing no energy in collisions with nuclei.

Radiation materials science describes the interaction of radiation with matter: a broad subject covering many forms of irradiation and of matter.