Thriller is a British television series, originally broadcast in the UK from 1973 to 1976. [1] It is an anthology series: each episode has a self-contained story and its own cast. [2] As the title suggests, each story is a thriller of some variety, from tales of the supernatural to down-to-earth whodunits. [3]

The series was created by Brian Clemens, who also scripted the majority of the episodes and story-lined every installment. [2] It was produced by John Sichel (the first 3 series), John Cooper (series 4) and Ian Fordyce (the final two series) for Associated Television (ATV) at their Elstree studios north of London. [4] The series evolved from Clemens' previous work, in particular two films in a similar style: And Soon the Darkness (1970) and Blind Terror (aka See No Evil , 1971); the latter shares plot similarities with the Thriller episodes The Eyes Have It and The Next Voice You See. [5] [6] Original music, including the theme-tune, was supplied by Clemens' regular collaborator Laurie Johnson. [7]

The original UK title-sequence featured still-shots of locations in the story, devoid of people, shot through a fisheye lens, bordered in bright red and set to Johnson's eerie, discordant theme-music. [2] With an eye to the American re-broadcast market, most episodes, especially from the second season onwards, featured at least one American principal character, portrayed by an American actor. [8] After originally being screened late at night in the U.S. under the ABC Wide World of Entertainment billing from 1973, some episodes were retitled for U.S. syndication in 1978, and all had additional opening sequences shot with new titles and credits but without the original cast and, for this reason, often only featuring menacing figures seen from the neck down. [9] [8] These title sequences were used in Britain when the series was repeated on regional ITV stations in the 1980s, and are also included as extras on the Complete Series box set. When the series was re-broadcast as part of The CBS Late Movie however, the original title-sequences and music were restored.

The stories were often set in the London commuter belt. A particular trademark of the series' storytelling was to hook the viewer with a simple yet totally baffling situation, of the kind seen in films such as Les Diaboliques (1955). [10] Come Out Come Out, Wherever You Are took place at a creaky country-house hotel: a female guest begins asking about her missing travelling-companion who the owner claims was not with her upon arrival the previous evening and whom none of the other guests initially recall seeing. [11] One episode, Screamer, concerns a rape-victim who murders her attacker, only to then see the man stalking her everywhere. [12] Perhaps the most ingenious episode is the Dial M for Murder style The Double Kill, in which a man hires a hitman to kill his wife, but makes a fatal error in his otherwise meticulous planning. [13]

Other memorable episodes include: Someone at the Top of the Stairs, one of a handful of forays into the supernatural, in which two female students move into a boarding house and begin to notice that none of the other residents ever go out or receive any mail; and I'm The Girl He Wants to Kill, in which a witness to a murder finds herself trapped in a deserted office-block overnight with the killer, and is forced to play a deadly game of cat-and-mouse with him to survive (there is barely any dialogue throughout its second half). [9] [14] Brian Clemens' own favourite episode, A Coffin for the Bride (US: Kiss Kiss, Kill Kill), featured a performance from a young Helen Mirren. [15]

Following a worldwide audit during 2003-04 by the then copyright-holders Carlton, almost all the original UK PAL fisheye-titled 2" videotapes of Thriller were located and transferred onto modern digital tape by the British Film Institute, with subsequent restoration-work by BBC Resources. One exception was the story Nurse Will Make It Better; however, this too exists in PAL/original format on the later 1" videotape format as a dub from the original master-tape (this version was broadcast on the satellite-channel Bravo in 1996).

For episodes that used a different title in the U.S., the U.S. title is shown in italics underneath the original British title.

Dinsdale Landen is the only actor playing the same role, that of private investigator Matthew Earp, in two episodes: An Echo of Theresa and The Next Scream You Hear, although Reg Lye played an unnamed 'Caretaker' in both 'Spell of Evil' and 'Good Salary - Prospects - Free Coffin' who could conceivably be the same character.

Michael David Apted, was an English television and film director and producer. 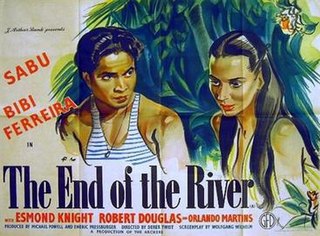 The End of the River (1947) is a British film made in Brazil about a South American Indian boy who leaves the jungle to the city, where he is accused of murder. It was directed by Derek Twist and written by Wolfgang Wilhelm, based on a novel by Desmond Holdridge. The film stars Sabu and Bibi Ferreira.

Ian Hogg is an English actor. 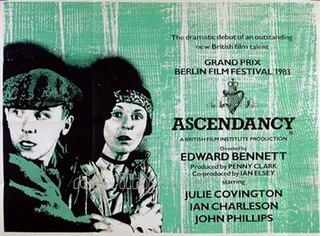 Ascendancy is a 1983 British drama film directed by Edward Bennett and starring Julie Covington and Ian Charleson. It tells the story of a woman who is a member of the British landowning 'Ascendancy' in Ireland during World War I. Gradually, she learns about the Irish independence movement, and becomes involved with it.

Follow a Star is a 1959 British black and white comedy film directed by Robert Asher and starring Norman Wisdom.

Patricia Molly Owens was a Canadian-born American actress, working in Hollywood. She appeared in about 40 films and 10 TV episodes in a career lasting from 1943 to 1968.

Christian Charles Roberts is an English actor, best remembered for his film debut role as the rebellious Denham in the 1967 film To Sir, with Love starring Sidney Poitier and Judy Geeson.

No Trace is a 1950 British crime film directed by John Gilling and starring Hugh Sinclair, Dinah Sheridan and John Laurie. The working title of the film was Murder by the Book. The screenplay concerns a crime writer who murders a blackmailer, and is then asked to help solve the case by the police.

The year 1973 in animation involved some events.

The Welsh-Pearson Company was a British film production and distribution company active during the silent and early sound eras. It was founded in 1918 by two pioneering film figures, George Pearson and Thomas Welsh, with the single-stage Craven Park Studios as their base. Because of the cramped conditions there, Welsh-Pearson had to use other studios such as Islington for larger scenes.