The Thrillseeker was a steel roller coaster located at Sea World on the Gold Coast, Queensland, Australia. Designed by S.D.C., the Galaxi model opened to the public in 1982. The ride is now a traveling roller coaster owned by Shorts Amusements of Victoria known as Taipan. [1]

In 1982, Sea World opened the park's first roller coaster, the Wild Wave Rollercoaster, along with the Pirate Ship and Carousel . [2] The Wild Wave Rollercoaster was later renamed to the Thrillseeker. [3] In May 2002, the Thrillseeker was closed and removed from Sea World. [1] [3] It now operates as a traveling roller coaster owned by Shorts Amusements of Victoria, known as Taipan. [1]

Following the ride's removal, proposals were made for the area it once occupied. These included a seal exhibit named Seal Rocks [4] and a hippopotamus attraction was proposed for the site. [5] From 2006 to 2008 the site was home to the temporary Sea World Eye. [6] [7] In September 2008, work began on the site for a yet-to-be-named ray exhibit. [8] By October, the name of the exhibit was announced to be Ray Reef. [9] It was originally scheduled that the exhibit would open on Boxing Day 2008 (26 December 2008), however, a number of delays forced it to open on 14 January 2009. [10] [11]

The ride began with the right turn out of the station. After ascending the 14 metres (46 ft) chain lift hill riders were sent in a course of quick dips and spiralling helixes. [1] 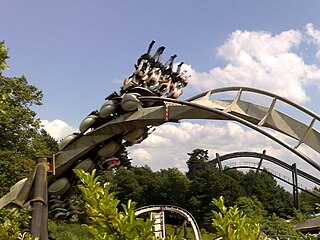 Nemesis is an inverted roller coaster located at the Alton Towers theme park in England. It opened to the public on March 19, 1994. The ride was manufactured by Bolliger & Mabillard and designed by Werner Stengel, in collaboration with attraction developer John Wardley. It is located in the Forbidden Valley area of the park, adjacent to Galactica and The Blade attractions.

SeaWorld Orlando is a theme park and marine zoological park, in Orlando, Florida. It is owned and operated by SeaWorld Parks & Entertainment. When combined with its neighbor Discovery Cove and Aquatica, it forms SeaWorld Parks and Resorts Orlando, an entertainment complex consisting of the three parks and many hotels. In 2018, SeaWorld Orlando hosted an estimated 4.594 million guests, ranking it the 10th most visited amusement park in the United States.

Arkham Asylum – Shock Therapy is a Vekoma SLC roller coaster located at Warner Bros. Movie World on the Gold Coast, Queensland, Australia. When the ride was introduced in 1995, it was themed to the Lethal Weapon film series and was named Lethal Weapon – The Ride. In 2012, the ride was rethemed to Batman: Arkham Asylum and renamed Arkham Asylum. From 2019 onwards due to unknown mechanical issues the ride has been standing but not operating until further notice. The ride was the first steel inverted roller coaster at an Australian theme park.

Hot Wheels SideWinder is a steel roller coaster operating at Dreamworld. The roller coaster is one of the tallest in the Southern Hemisphere, after originally being the tallest when it was first built. Designed by Arrow Dynamics, built in Melbourne by Able Leisure Pty. Ltd the ride was originally installed at Luna Park Sydney in 1995 as the Big Dipper before being sold and relocated to Dreamworld on the Gold Coast in 2001. When it was brought to Dreamworld, the ride was the first roller coaster to be opened on the Gold Coast since 1997. The roller coaster was named Cyclone from 2001 until 2015 when it was refurbished and was also named Hot Wheels SideWinder from 2015 to 2020. 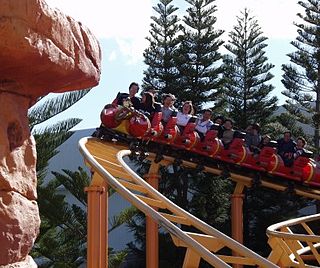 Cheetah Hunt is a steel launched roller coaster at Busch Gardens Tampa Bay in Tampa, Florida. Manufactured by Intamin, it opened to the public on May 27, 2011, alongside a new cheetah exhibit, "Cheetah Run". 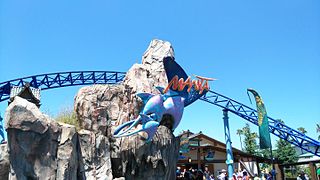 Manta is a steel family launched roller coaster at SeaWorld San Diego in San Diego, California, United States. The ride was manufactured by MACK Rides and opened to the public on May 26, 2012. It utilizes the same ride system that was used in Blue Fire which opened in 2009 at Europa Park. 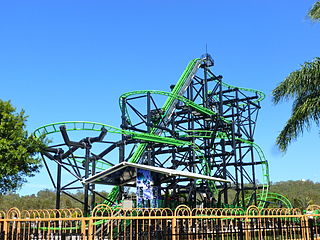 Green Lantern Coaster is a steel roller coaster at Warner Bros. Movie World on the Gold Coast, Queensland, Australia. The ride is themed after DC Comics' Green Lantern and is located within the park's DC Comics superhero hub. The ride is an El Loco roller coaster manufactured by S&S – Sansei Technologies, characterised by a tight circuit featuring a beyond-vertical drop and an outward banked turn. When it opened in 2011, it held the record for having the second steepest drop in the world among roller coasters, and the steepest drop in the Southern Hemisphere, the latter of which is a record it still holds as of 2020. Green Lantern Coaster officially opened on 23 December 2011.