Toasted TV is an Australian children's television program which aired on Network 10 and later 10 Peach from 22 August 2005 to 18 September 2020.

Toasted TV replaced similar children's program Cheez TV in the same timeslot. The series originally aired on Network 10 until 25 February 2012, when it moved to 10 Peach (then known as Eleven). It was originally presented by Pip Russell and Dan Sweetman, with the final hosts Ollie McCormack and Lia Walsh.

On 13 July 2020, Network 10 announced that Toasted TV has been axed and that the show would end production in August; the final episode aired on 18 September 2020. [1]

The show targeted an audience of 7- to 14-year-olds.[ citation needed ] The activities of the hosts are interspersed with cartoons and anime, such as Pokémon , Avatar: The Last Airbender , Beyblade: Metal Fusion , SpongeBob SquarePants , Yu-Gi-Oh! GX (Yu-Gi-Oh! Duel Monsters GX), The Penguins of Madagascar , and Bakugan .

Premiering on 22 August 2005, it succeeded Cheez TV , and is produced in conjunction with Village Roadshow Theme Parks, the owner of Warner Bros. Movie World, Sea World and Wet'n'Wild Water World. On 13 July 2011 to show changed to filming at Dreamworld. As of 2 July 2012, the show is shot in a studio.

The following is a complete list of cartoons which have premiered on Toasted TV or aired new episodes on Toasted TV. Shows listed according to the era of their premiere.

Cheez TV was an Australian children's cartoon show, hosted by Ryan Lappin and Jade Gatt, that aired on weekday mornings on Network Ten. It began broadcasting on 17 July 1995 and it ended on 31 December 2004 with the presenters leaving. After eight months of being without presenters, it officially ended on 20 August 2005, and was replaced with Toasted TV.

RollerCoaster is a children's television show which was broadcast by the Australian Broadcasting Corporation from between January 2005 and January 2010. Hosted by Elliot Spencer, it was aimed at an older audience than that for ABC For Kids.

Pop TV is a Slovenian generalist television channel operated by Pro Plus d.o.o., a subsidiary of Central European Media Enterprises (CME), which is in turn owned by Czech investment company PPF.

Julie Lemieux is a Canadian voice actress and comedian.

Strictly Come Dancing: It Takes Two is a British television programme, the companion show to the popular BBC One programme Strictly Come Dancing. First aired on 25 October 2004, it is broadcast from Monday to Friday during the run of the main show on BBC Two at 6:30 pm.

Pop Max is a British free-to-air children's television channel in the United Kingdom, owned by Narrative Entertainment UK Limited. As of June 2014, it broadcasts cartoons, sci-fi, action and adventure series and anime on Sky and Freesat. Its target audience is 7 to 12-year-old boys.

Biggs is a Portuguese basic cable and satellite television targeted to children, teens and youth ages 8 to 14. It was launched on 1 December 2009 on the NOS platform. It airs live-action shows, films, anime and cartoon shows. It also used to air archived programs from Canal Panda. Its design is very similar to that of YTV and Disney XD.

10 Peach is an Australian free-to-air television channel operated by Network 10. It was launched on 11 January 2011 as Eleven. It is owned by ElevenCo, which was established as a joint venture between Ten Network Holdings and CBS Studios International; the latter would ultimately acquire Network 10 in 2017. 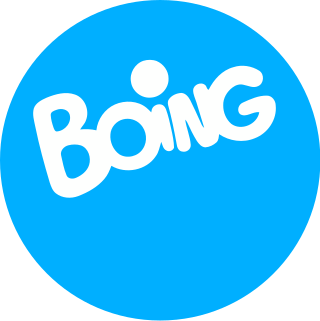 Boing is a Spanish free-to-air television channel launched in 2010 and owned as a joint venture between Mediaset España and Warner Bros. Discovery through its International unit. When Cartoonito and Cartoon Network were shut down on 30 June 2013, many of their programmes were moved to Boing, alongside new Boomerang programmes. Series on the channel are also available in English via a secondary audio feed.

Daniel Petronijevic, known professionally as Dan Petronijevic, is a Canadian actor who has appeared in various feature films, including the American Pie franchise, and in TV shows such as 19-2, Playmakers, Cardinal, and Letterkenny. He also has extensive experience doing voice acting for numerous animated series. His most recent acting role was playing detective Marv Bozwick in the film Spiral.

Marco Balzarotti is an Italian voice actor. He contributes to voicing characters in anime, cartoons, video games, movies, and other content.