Thubten Kunphel (Tibetan : ཐུབ་བསྟན་ཀུན་འཕེལ, Wylie : thub bstan kun vphel, 1905 – 1963), commonly known as Kunphela, was a Tibetan politician and one of the most powerful political figures in Tibet during the later years of the 13th Dalai Lama's rule, known as the "strong man of Tibet". [1] [2] Kunphela was arrested and exiled after the death of the Dalai Lama in 1933. He later escaped to India and became a co-founder of the India-based Tibet Improvement Party with the aim of establishing a secular government in Tibet. He worked in Nanking after the attempt to start a revolution in Tibet failed, and returned to Tibet in 1948. [3]

Kunphela was born as Dechen Chödrön in a "taxpayer" serf family in Nyemo in 1905. At the age of 12, he was sent to Lhasa as a servant in the palace of the 13th Dalai Lama. His intelligence gained the Dalai Lama's attention, and subsequently he became a household servant, and then the favorite personal attendant, known as jensey. [4] In the 1920s, he oversaw a series of construction tasks including the renovation of the Potala Palace and the expansion of Norbulingka. In 1931, he became the head of Trapchi Electrical Machine Office, in charge of several mints and munition factories that were considered the most modern ones of Tibet at the time. [1]

In 1932, he successfully persuaded the Dalai Lama to allow him to establish a Trongdra Regiment under his control. The soldiers were recruited from middle-class families, and the equipment and training far exceeded other Tibetan troops. [1]

By 1933, Kunphela had gained the authority of appointing and dismissing government officials. He also controlled the importation and distribution of arms and ammunition. [2] Kunphela issued orders without the need of confirmation of the Kashag or the Dalai Lama, and his orders were obeyed as much as those from the Dalai Lama himself. He was known as the "strong man of Tibet". [2] [5]

After the death of the 13th Dalai Lama in December 1933, Kunphela's status became unclear. Initially, Kunphela was confident of his position because of his control of the Trongdra Regiment. He held the power to organize the construction of the Dalai Lama's tomb, and a large part of lay officials present in the National Assembly, composing of government officials and abbots of key monasteries, supported him to become regent even though the position was traditionally for an incarnate lama. [6]

In the meanwhile, Lungshar, one of the parties vying for control after the 13th Dalai Lama's death, conspired to accuse Kunphela of playing a role in the sudden death of the Dalai Lama, and gathered the support of a large number of abbots and monks. The charge was also given support by several Lungshar's friends in the Kashag, who confirmed that only Kunphela accompanied the Dalai Lama all the time. In the meanwhile, Lungshar took advantage of the Trongdra soldiers' dissatisfaction and successfully persuaded them to mutiny. On the third day after death of the Dalai Lama, the entire regiment demonstrated before the Norbulingka and demanded its own disbandment. The regiment was then disbanded on the Kashag's order. [7] [8]

After the desertion of the Trongdra Regiment, Kunphela was arrested and confined in the Sharcenchog prison. Lungshar sought to inflict death or mutilation on Kunphela, but the suggestion was opposed by the Assembly. [9] Eventually, Kunphela was only convicted of failing to deliver prompt notification about the Dalai Lama's illness, and sentenced to exile for life to Kongpo. He was banished in public on the second day before the Tibetan New Year, the most inauspicious day of the year. All his property and that of his relatives was confiscated. Kunphela's father was sent back to serve as a serf in Nyemo. [10]

Kunphela fled to India in 1937 together with Canglocen, a well-known poet and ex-official who was exiled because of supporting Lungshar. In Kalimpong, they met Pandatsang Rapga, a Khamba nationalist and intellectual, and started the Tibet Improvement Party in 1939. [11] According to Pandatsang, the primary goals of the party were "liberation of Tibet from the existing tyrannical government," and a political and societal revolution in Tibet for a secular government under the Republic of China. [12]

In 1946, the activities of Gendün Chöphel, a leading figure in the party, were discovered in Tibet. [12] Under pressure from the Tibetan Government, the Government of India placed Kunphela under surveillance after 1946 and deported him to China one year later. At the time, Varanasi University offered him a position as a lecturer which would have allowed him to legally remain in India. Kunphela refused the offer and left for Shanghai in 1947. [13]

After the deportation, Kunphela lived in poverty in Shanghai and Nanking for a while, but was eventually able to work for the Mongolian and Tibetan Affairs Commission following an invitation. [3]

In 1947, Kunphela discovered that the ex-regent of Tibet, Reting Rinpoche Jamphel Yeshe Gyaltsen was appealing to the Kuomintang government to overthrow the Taktra Government in Tibet. Thubten Sangbo, the Tibetan Government's representative in Nanking, was informed. The news soon reached Lhasa, and led to Reting's arrest. Kunphela was allowed back to Lhasa in 1948, obviously because of his role in the Reting affair. According to Sampho Tenzin Dhondup, Kunphela's motive was a conflict from the time Kunphela worked for Reting's trade company in India: Kunphela made several purchases in Bombay, but was not reimbursed for his loss even though Reting's company was far from short of funds. [3]

In 1952, Kunphela was one of the staff members of the Grain Procurement Bureau, an newly established institution under the Kashag for resolving the problem of grain shortage. [14] In 1956, Kunphela became the deputy director of the Bureau of Geology under the Preparatory Committee for the Tibet Autonomous Region (PCTAR). He attended the 8th anniversary celebrations of China in Beijing, and was received, along with other Tibetan visitors, by Mao Zedong and Zhou Enlai. Kunphela became vice-director of the Executive Office under the General Office of the Preparatory Committee. He died in Lhasa on December 22, 1963, aged 58. [15]

Dalai Lama is a title given by the Tibetan people to the foremost spiritual leader of the Gelug or "Yellow Hat" school of Tibetan Buddhism, the newest and most dominant of the four major schools of Tibetan Buddhism. The 14th and current Dalai Lama is Tenzin Gyatso, who lives as a refugee in India. The Dalai Lama is also considered to be the successor in a line of tulkus who are believed to be incarnations of Avalokiteśvara, the Bodhisattva of Compassion. 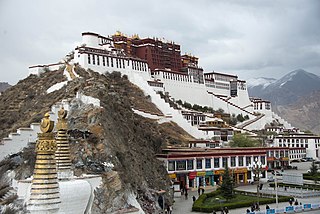 The Potala Palace is a dzong fortress in Lhasa, Tibet. It was the winter palace of the Dalai Lamas from 1649 to 1959, has been a museum since then, and has been a World Heritage Site since 1994. 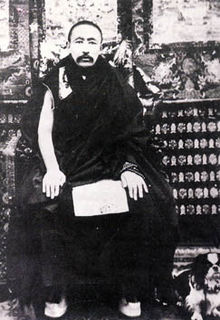 Ngawang Lobsang Thupten Gyatso Jigdral Chokley Namgyal, abbreviated to Thubten Gyatso was the 13th Dalai Lama of Tibet, enthroned during a turbulent era and the collapse of the Qing Empire. Referred to as "the Great Thirteenth", he is also known for redeclaring Tibet's national independence, and for his reform and modernization initiatives.

Ü-Tsang is one of the three traditional provinces of Tibet, the others being Amdo in the north-east, and Kham in the east. Ngari in the north-west was incorporated into Ü-Tsang. Geographically Ü-Tsang covered the south-central of the Tibetan cultural area, including the Brahmaputra River watershed. The western districts surrounding and extending past Mount Kailash are included in Ngari, and much of the vast Changtang plateau to the north. The Himalayas defined Ü-Tsang's southern border. The present Tibet Autonomous Region corresponds approximately to what was ancient Ü-Tsang and western Kham.

Norbulingka is a palace and surrounding park in Lhasa, Tibet, built from 1755. It served as the traditional summer residence of the successive Dalai Lamas from the 1780s up until the 14th Dalai Lama's exile in 1959. Part of the "Historic Ensemble of the Potala Palace", Norbulingka is recognized as a UNESCO World Heritage Site, and was added as an extension of this Historic Ensemble in 2001. It was built by the 7th Dalai Lama and served both as administrative centre and religious centre. It is a unique representation of Tibetan palace architecture. 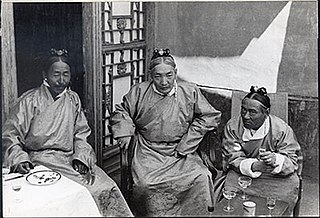 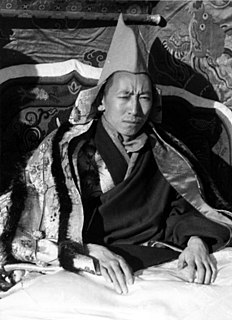 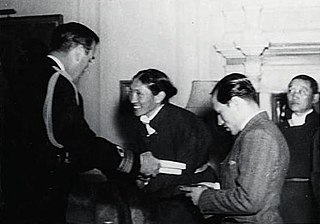