Aiding & Abetting reviewed Thugs 'n' Kisses positively and said the album "has tracks from some of the best in the business" and "the result is an almost seamless foray into a nice industrial-techno subgenre." [3] The Alternative Press described it as "sixteen aggressive guitar/synth combinations aimed at frequenters of mosh pits who have little or no regard for their own personal safety." [4] Industrialnation called the collection "a veritable paradise of earthly delights for those who enjoy a more non-standard, anti-four-on-the-floor sound." [5] Sonic Boom called the release "a very solid collection of electrocore bands proving once again that there is more to industrial guitar music than the MTV poster child NIN would lead us to believe." [6] Black Monday credited "Human Waste" as being a highlight of Society Burning's discography and better than any song on their 1996 debut EP Entropy.Lingua . [7] 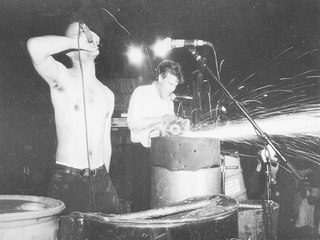 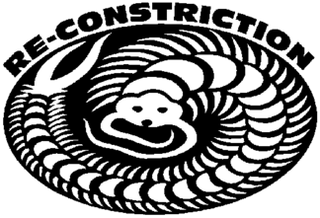 Re-Constriction Records was a division of Cargo Music based in California. The label was founded in 1991 and headed by Chase, who was previously the Music Director at KCR, a student radio station on the campus of San Diego State University. They specialized in releasing bands belonging to the industrial, grindcore, electroclash, aggrotech and EBM genres.

Diatribe was an industrial rock group from San Jose, California which was active in the 1990s. They had a sound similar to 16 Volt and Chemlab, integrating synthesizers and vocal samples with more traditional rock instruments. The band's full-length debut Diatribe was released by Cargo Music and Re-Constriction Records on November 3, 1996. 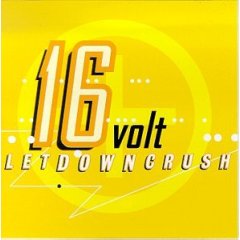 LetDownCrush is the third studio album by 16volt, released on August 7, 1996 by Cargo and Re-Constriction Records. 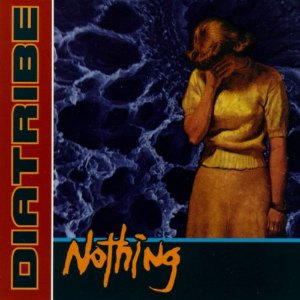 Nothing is the second EP by Diatribe, released on October 19, 1992 by Re-Constriction Records.

Society Burning is an American coldwave industrial rock act composed of Daveoramma, Twitch, and Boom chr Paige. The group was founded in Las Cruces, New Mexico, United States, as a side project of Daveoramma's in 1991 by the moniker ‘The Watchmen’. 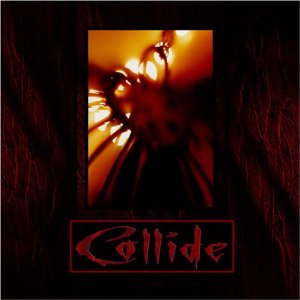 Beneath the Skin is the second studio album by Collide, released on January 1996 by Re-Constriction Records.

Hypersonic Hyperphonic is the second studio album by Tinfed, released on December 3, 1996 by Re-Constriction Records. Option described the album as "walk[ing] the tightrope between discordant rock and synthcore." 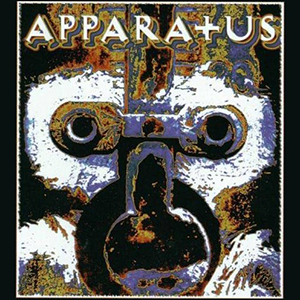 Apparatus is the eponymously titled and only album by Apparatus, released on August 1, 1995 by Re-Constriction Records. Promotional music videos were filmed for the songs "Come Alive" and "Hell's Home". After the album's publication the trio disbanded, with keyboardist David York and guitarist Scott Morgan forming the band Liquid Sex Decay later. 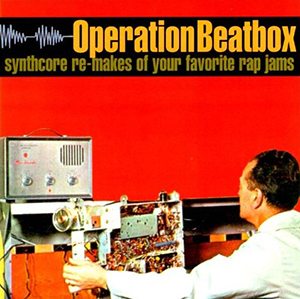 Operation Beatbox is a various artists compilation album released on September 17, 1996 by Re-Constriction Records. The album compiles covers of popular hip hop tracks performed by electro-industrial acts, many of whom were part of the Re-Constriction roster. It served as a direct sequel to the similarly themed cover album compilation Shut Up Kitty, released in 1993. 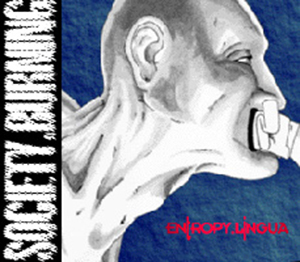 Entropy.Lingua is an EP by Society Burning, released on March 5, 1996 by Re-Constriction Records.

TV Terror: Felching a Dead Horse is a various artists compilation album released on September 23, 1997 by Re-Constriction Records. The idea came to fruition when Permission founder Jayson Elliot discovered Monochrome - A Tribute to the Sisters of Mercy via a car ride through Chicago in June 1994 and compiled the music on the second disc. Its release was the cause of the first utterance of the word "felch" on national television when Kurt Loder reported its release on MTV News.

Pain Emission were an American electro-industrial group based in San Diego, California, United States. The original incarnation consisted of vocalist Shonn Bratlien and keyboardist Thomas Smith, who were assisted by lyricist Johan Sherriffs and live percussionist Barry Dost in the studio. They released two albums on COP International, Fidget in 1993 and The War Within the following year. The band ceased activities shortly after they released the EP Nudge in 1994. 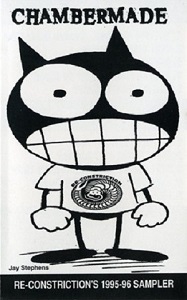 Chambermade is a various artists compilation album released in 1995 by Cargo Music and Re-Constriction Records.

Chaos Compilation is a various artists compilation album released on May 1, 1995 by COP International. 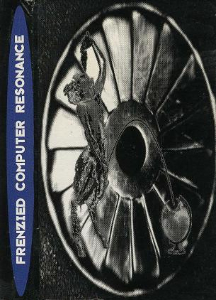 Frenzied Computer Resonance is a various artists compilation album released in 1994 by Fifth Colvmn Records. The collection comprises tracks by Acumen, Chemlab, haloblack and Perceptual Outer Dimensions, which were released on their albums Transmissions from Eville (1994), Burn Out at the Hydrogen Bar (1993), Tension Filter (1994) and The Journey to Planet POD (1994).

Fifth Colvmn Records was founded in 1990 by Zalman Fishman, with vocalist Jared Louche employed as general manager, and was recognized for its industrial music roster. The label made its debut with an EP, titled 10 Ton Pressure, by the industrial rock group Chemlab and in 1993 released the band's critically acclaimed studio album Burn Out at the Hydrogen Bar. The label dissolved in 1997 and made its final release the various artists compilation World War Underground.

Sphere Lazza were an American electro-industrial based out of Orlando, Florida. The nucleus of the band comprised the musical duo of Tony Spaz and David Trousdale. The band released one studio album titled The Enemy Within in 1995 for Cleopatra Records.

The Enemy Within is the debut studio album by Sphere Lazza, released on September 12, 1995 by Cleopatra Records. The intended to follow their debut with a second album, tentatively titled Paradigm Shift, but the band's insterests were diverted elsewhere and the project never came to fruition.