Cover art is a type of artwork presented as an illustration or photograph on the outside of a published product such as a book (often on a dust jacket), magazine, newspaper (tabloid), comic book, video game (box art), DVD, CD, videotape, music album (album art) or podcast. [1] The art has a primarily commercial function, for instance to promote the product it is displayed on, but can also have an aesthetic function, and may be artistically connected to the product, such as with art by the creator of the product. [2] [3]

Album cover art is artwork created for a music album. Notable album cover art includes Pink Floyd's The Dark Side of the Moon, King Crimson's In the Court of the Crimson King, the Beatles' Sgt. Pepper's Lonely Hearts Club Band , Abbey Road and their self-titled "White Album" among others. Albums can have cover art created by the musician, as with Joni Mitchell's Clouds , [4] or by an associated musician, such as Bob Dylan's artwork for the cover of Music From Big Pink , by the Band, Dylan's backup band's first album. Artists known for their album cover art include Alex Steinweiss, an early pioneer in album cover art, Roger Dean, and the Hipgnosis studio. Some album art may cause controversy because of nudity, offending churches, trademark or others. [5] There have been numerous books documenting album cover art, particularly rock and jazz album covers. [6] [7] [8] Steinweiss was an art director and graphic designer who brought custom artwork to record album covers and invented the first packaging for long-playing records. [5]

Whether printed on the dust jacket of a hardcover book, or on the cover of a paperback, book cover art has had books written on the subject. [9]  Numerous artists have become noted for their book cover art, including Richard M. Powers and Chip Kidd.  In one of the most recognizable book covers in American literature, two sad female eyes (and bright red lips) adrift in the deep blue of a night sky, hover ominously above a skyline that glows like a carnival.  Evocative of sorrow and excess, the haunting image has become so inextricably linked to The Great Gatsby that it still adorns the cover of F. Scott Fitzgerald’s masterpiece 88 years after its debut. The iconic cover art was created by Spanish artist Francis Cugat.  With the release of a big Hollywood movie, however, some printings of the book have abandoned the classic cover in favor of one that ties in more closely with the film.  [10]   [11]

A book cover is usually made up of images (illustrations, photographs, or a combination of both) and text. It usually includes the book title and author and can also include (but not always) a book tagline or quote. The book cover design is usually designed by a graphic designer or book designer, working in-house at a publisher or freelance. Once the front cover art has been approved, they will then continue to design the layout of the spine (including the book title, author name and publisher imprint logo) and the back cover (usually including a book blurb and sometimes the barcode and publisher logo). Books can be designed as a set of series or as an individual design. Very commonly the same book will be designed with a different cover in different countries to suit the specific audience. For example, a cover designed for Australia may have a completely different design in the UK and again in the USA.

Magazine cover artists include Art Spiegelman, who modernized the look of The New Yorker magazine, and his predecessor Rea Irvin, who created the Eustace Tilly iconic character for the magazine.

Today the word tabloid is used as a somewhat derogatory descriptor of a style of journalism, rather than its original intent as an indicator of half-broadsheet size. This tends to cloud the fact that the great tabloids were skilfully produced amalgams of intriguing human interest stories told with punchy brevity, a clarity drawn from the choice of simple but effective words and often with a healthy dose of wit. [12]   The gossipy tabloid scandal sheets, as we know them today, have been around since 1830. That's when Benjamin Day and James Gordon Bennett Sr., the respective publishers of The New York Sun and The New York Herald, launched what became known as the Penny Press (whose papers sold for one cent apiece). [13]   But some of the world's best journalism has been tabloid. [14]   From the days when John Pilger revealed the cold truth of Cambodia's Killing Fields in the Daily Mirror, to the stream of revelations that showed the hypocrisy of John Major's "back to basics" cabinet, award-winning writing in the tabloids is acknowledged every year at the National Press Awards. [14]   Good cover art can lead readers to this fact; the New York Herald, for example, offers some fine examples of tabloid cover art. [15]   [16]   So too does the News & Review, a free weekly published in Reno, Nevada, Chico, California and Sacramento, California.  [17]   The tabloid has thrived since the 1970s, and even uses cartoonish cover art.  [18]   Tabloids have a modern role to play, and along with good cover art (and new ideas) they fill a niche. [19] 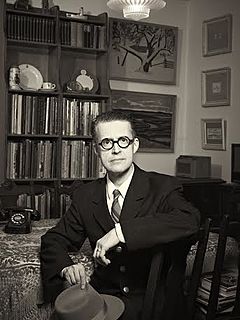 Gregory Gallant, better known by his pen name Seth, is a Canadian cartoonist. He is best known for his series Palookaville and his mock-autobiographical graphic novel It's a Good Life, If You Don't Weaken (1996). 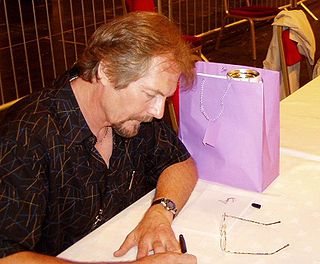 An album cover is the front of the packaging of a commercially released audio recording product, or album. The term can refer to either the printed paperboard covers typically used to package sets of 10 in (25 cm) and 12 in (30 cm) 78-rpm records, single and sets of 12 in (30 cm) LPs, sets of 45 rpm records, or the front-facing panel of a CD package, and, increasingly, the primary image accompanying a digital download of the album, or of its individual tracks.

James Flora, best known for his distinctive and idiosyncratic album cover art for RCA Victor and Columbia Records during the 1940s and 1950s, was also a prolific commercial illustrator from the 1940s to the 1970s and the author/illustrator of 17 popular children's books. He was a fine artist as well, who created hundreds of paintings, drawings, etchings and sketches over his 84-year lifespan.

Judith A. Hunt is an American illustrator/painter/cartoonist/designer who has produced a diverse array of artwork for books, magazines, television, comics, videos, and toys. She has worked as an art director and staff illustrator/designer for magazine companies. As of 2018, she illustrates educational texts and children's books from her studio in Kennebunk, Maine, and showcases her fine art in local art shows.

Les Edwards is a British illustrator known for his work in the horror, science fiction and fantasy genres, and has provided numerous illustrations for book jackets, posters, magazines, record covers and games during his career. In addition to working under his actual name, he also uses the pseudonym Edward Miller to paint in a different style and to overcome restrictions placed on him by his association with horror. He has won the British Fantasy Society award for Best Artist seven times, and was awarded the World Fantasy Award in 2008.

Guy Peellaert was a Belgian artist, painter, illustrator, comic artist and photographer, most famous for the book Rock Dreams, and his album covers for rock artists like David Bowie and The Rolling Stones. He also designed film posters for films like Taxi Driver, Paris, Texas, and Short Cuts. The band Frankie Goes to Hollywood took their name from Peellaert's painting, titled Frank Sinatra, which featured the headline "Frankie Goes Hollywood".

Paul Bacon was an American book and album cover designer and jazz musician. He is known for introducing the "Big Book Look" in book jacket design, and designed about 6,500 jackets and more than 200 jazz record covers.

Edward Eugene Buck was an American illustrator of sheet music, musical theater lyricist, and president of the American Society of Composers, Authors and Publishers (ASCAP).

Mary Ellen Edwards, also known as MEE, was a British artist and illustrator. She contributed to many Victorian newspapers, periodicals and children's books.

Drew Struzan is an American artist, illustrator, and cover designer known for his more than 150 movie posters, which include The Shawshank Redemption, Blade Runner, Mallrats, as well as films in the Indiana Jones, Back to the Future, and Star Wars film series. He has also painted album covers, collectibles, and book covers.