The film's sets were designed by the art directors Paul Markwitz and Heinrich Richter. It was shot at the Terra Film studios in Marienfelde.

Karl Valentin was a Bavarian comedian, cabaret performer, clown, author and film producer. He had significant influence on German Weimar culture. Valentin starred in many silent films in the 1920s, and was sometimes called the "Charlie Chaplin of Germany". His work has an essential influence on artists like Bertolt Brecht, Samuel Beckett, Loriot and Helge Schneider.

Erwin Faber was a leading actor in Munich and later throughout Germany, beginning after World War I, and through the late-1970s, when he was still performing at the Residenz Theatre. Born in Innsbruck, Austria, Faber remained in Germany during the Third Reich, emerging afterwards as a prominent actor in the Federal Republic of Germany. He died in Munich in 1989, only two months after his last performance at the Residenztheater, at age 97. 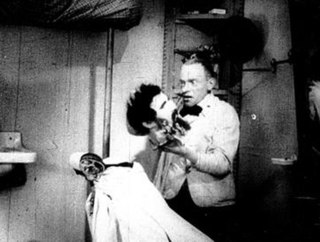 Mysteries of a Barbershop is a comic, slapstick German film of 33 minutes, created by Bertolt Brecht, directed by Erich Engel, and starring the Munich cabaret clown Karl Valentin and leading stage actor Erwin Faber. Brecht reportedly did not write a complete shooting script, but rather produced "notes" and "parts of a manuscript" for this short, silent film and intended the actors to improvise the action. Although the film was not considered a success by any of its creative team, and consequently never released as a profit making film to the public, it has been recognized and acknowledged—since its re-discovery in a Moscow archive in the 1970s—as a considerably important German film.

The Bartered Bride is a 1932 German musical comedy film directed by Max Ophüls and starring Jarmila Novotná, Otto Wernicke, and Karl Valentin. It is based on the comic opera of the same name by Czech composer Bedřich Smetana.

Hannah Herzsprung is a German actress. 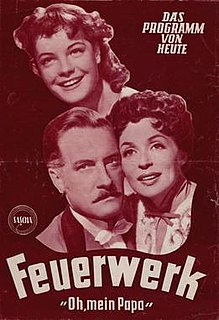 Liesl Karlstadt was a German actress and cabaret performer. Alongside Karl Valentin, she set the tone for a generation of popular culture in Munich. She appeared in more than 75 films between 1913 and 1960.

Jo Baier is a German film director and writer. He directed more than twenty films since 1982 and is known for Operation Valkyrie (2004), Henri 4 (2010) and Not All Were Murderers (2006). He is married to Gertrud Baier.

Do Not Send Your Wife to Italy is a 1960 West German romantic comedy film directed by Hans Grimm and starring Marianne Hold, Claus Biederstaedt and Elma Karlowa.

Fruit in the Neighbour's Garden is a 1935 German comedy film directed by Erich Engels and starring Karl Valentin, Liesl Karlstadt and Adele Sandrock. Engels later remade the film in 1956.

Fanfare of Marriage is a 1953 West German comedy film directed by Hans Grimm and starring Dieter Borsche, Georg Thomalla and Inge Egger. It is the sequel to the 1951 German film Fanfares of Love.