The Thuri, also known as Shatt, [2] [2] and Luo people of South Sudan. [1] They speak DheThuri, a Luo language [1] that is similar to the Jur and Dinka languages. [2] Having been perceived as close to the Dinka people, the Thuri were targets of ethnic violence during the Second Sudanese Civil War, when the "Army of Peace", a mostly Fertit pro-government militia, attacked them as supporters of the mostly Dinka SPLA rebels. This caused many Thuri to take up arms and to join the SPLA in order to take revenge against other Fertit groups. [2] 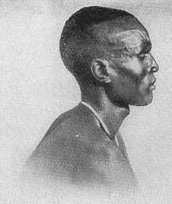 The Dinka people are a Nilotic ethnic group native to South Sudan with a sizable diaspora population abroad. The Dinka mostly live along the Nile, from Bor to Renk, in the region of Bahr el Ghazal, Upper Nile (two out of three Provinces which were formerly located in southern Sudan, and the Abyei Area of the Ngok Dinka in South Sudan. 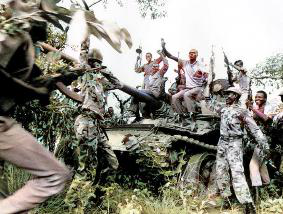 The Second Sudanese Civil War was a conflict from 1983 to 2005 between the central Sudanese government and the Sudan People's Liberation Army. It was largely a continuation of the First Sudanese Civil War of 1955 to 1972. Although it originated in southern Sudan, the civil war spread to the Nuba mountains and the Blue Nile. It lasted for 22 years and is one of the longest civil wars on record. The war resulted in the independence of South Sudan six years after the war ended. 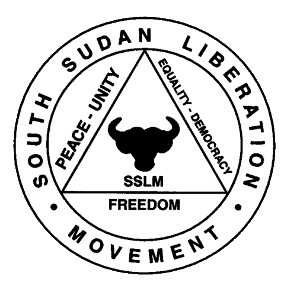 The dozen Luo, Lwo or Lwoian languages are spoken by the Luo peoples in an area ranging from southern Sudan to southern Kenya, with Dholuo extending into northern Tanzania and Alur into the Democratic Republic of the Congo. They form one of the two branches of the Western Nilotic family, the other being the Dinka–Nuer. The Southern Luo varieties are mutually intelligible, and apart from ethnic identity they might be considered a single language. 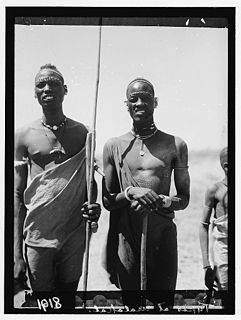 The Shilluk are a major Luo Nilotic ethnic group of Southern Sudan, living on both banks of the river Nile, in the vicinity of the city of Malakal. Before the Second Sudanese Civil War the Shilluk also lived in a number of settlements on the northern bank of the Sobat River, close to where the Sobat joins the Nile.

The Murle are a Surmic ethnic group inhabiting the Pibor County and Boma area in Jonglei State, South Sudan, as well as parts of southwestern Ethiopia. They have also been referred as Beir by the Dinka and as Jebe by the Luo and Nuer, among others. The Murle speak the Murle language, which is part of the Surmic language family. The language cluster includes some adjoining groups in Sudan, as well as some non-contiguous Surmic populations in southwestern Ethiopia.

Wau is a city in northwestern South Sudan, on the western bank of the Jur River, that serves as capital for Western Bahr el Ghazal. It lies approximately 650 kilometres (400 mi) northwest of the capital Juba. A culturally, ethnically and linguistically diverse urban center and trading hub, Wau is also the former headquarters of Western Bahr el Ghazal.

Dār Fertit is a historical term for the lowlands south of Darfur and east of the highlands in the east of the modern-day Central African Republic that contain tributaries of the White Nile River. This region included parts of southwestern Sudan and northwestern South Sudan. In the present era, Fertit is a catch-all word for non-Dinka, non-Arab, non-Luo, non-Fur groups and tribes in Western Bahr el Ghazal, South Sudan. Even though these groups often speak different languages and have a history of inter-tribal violence, they have become more unified over time, mostly out of opposition to the Dinka people.

Deim Zubeir, from the Arabic ديم الزبير [“Daim az-Zubayr”], commonly translated as the “Camp of Zubeir”, is the historically established but highly controversial name of Uyujuku town in the Lol State of the Republic of South Sudan, located in the Western Bahr El Ghazal part of the country, some 70 km from the border with the Central African Republic (CAR), near the Biri tributary of the River Chel. 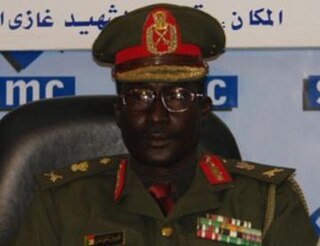 Gabriel Gatwech Chan, more commonly known by the nickname Tang-Ginye or Tanginye meaning "long pipe", was a Nuer and a commander in various primarily Nuer rebel militias in South Sudan. General Tanginye led a southern border militia allied to the Khartoum government during Sudan's civil war. Members of the Sudanese armed forces loyal to Gen Tang in Malakal clashed with the Sudan People's Liberation Army (SPLA) in 2006, killing about 150 people, and in 2009 in breach of the peace deal. In April 2011, clashes between his militia and the SPLA in the state of Jonglei killed at least 57 according to government officials. Shortly thereafter, Tanginye surrendered to SPLA forces and was placed under house arrest in Juba awaiting charges against him. During the South Sudanese Civil War, he allied with the SPLA-IO and later Lam Akol's militia, a Juba linked rebel group called the National Democratic Movement (NDM) and became its chief of staff. In January 2017 he visited a NDM-allied group, the Tiger Faction New Forces, in the Hamra area in the northern Upper Nile. In course of this visit, the Tigers were attacked by SPLM-IO-affiliated fighters belonging to the militia of John Uliny, and Tanginye was killed alongside most of the Tigers.

Peter Lorot is a former officer who served with the Sudan People's Liberation Army (SPLA) during the Second Sudanese Civil War (1983-2005). He broke away from the SPLA in 1999 with a Didinga force based on Chukudum, in Budi County of Eastern Equatoria State in South Sudan. In the resulting conflict many people were displaced. As of April 2011 Lorot's forces were still not reconciled with the de facto SPLM government.

Ethnic violence in South Sudan has a long history among South Sudan's varied ethnic groups. South Sudan has 64 tribes with the largest being the Dinkas, who constitute about 35% of the population and predominate in government. The second largest are the Nuers. Conflict is often aggravated among nomadic groups over the issue of cattle and grazing land and is part of the wider Sudanese nomadic conflicts.

The South Sudanese Civil War was a conflict in South Sudan between forces of the government and opposition forces. In December 2013, President Kiir accused his former deputy Riek Machar and ten others of attempting a coup d'état. Machar denied trying to start a coup and fled to lead the SPLM – in opposition (SPLM-IO). Fighting broke out between the Sudan People's Liberation Movement (SPLM) and SPLM-IO, igniting the civil war. Ugandan troops were deployed to fight alongside the South Sudanese government. The United Nations has peacekeepers in the country as part of the United Nations Mission in South Sudan (UNMISS). 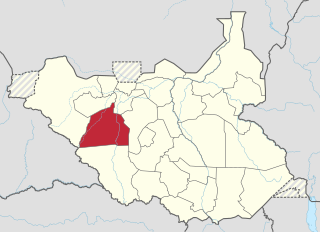 Wau State was a state in South Sudan that existed between 2 October 2015 and 22 February 2020. It was located in the Bahr el Ghazal region, and was part of the former state of Western Bahr el Ghazal. Wau State bordered Aweil State, Gbudwe State, Gogrial State, Lol State, and Tonj State. 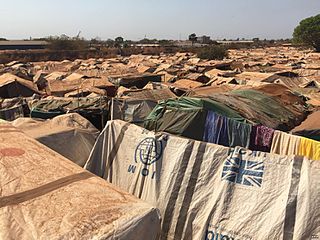 Armed clashes took in Wau State from late June 2016 to January 2019, between the Dinka-dominated Sudan People's Liberation Army (SPLA) and local opposition forces, consisting of tribal Fertit militias as well as fighters claiming allegiance to Riek Machar. It is unclear to what extent these rebels are actually part of the SPLM-IO or acting independently while using the SPLM-IO's name. The clashes resulted in the arrest of the state's governor, Elias Waya Nyipuoc, widespread death and destruction in the state capital, Wau town, and the displacement of up to 150,000 people.

Mathiang Anyoor, also spelled Mathiang Anyur, also known as Dot Ke Beny, is a Dinka-affiliated militia group in South Sudan. Originally an ad-hoc volunteer force founded in 2012, the militia was transformed into a private army to protect President Salva Kiir Mayardit and army chief Paul Malong Awan. However, the South Sudanese military (SPLA) claims that it is just another battalion. Much of the ethnic violence against non-Dinkas in the South Sudanese Civil War is attributed to the militia.

The Army of Peace was a large alliance of Fertit tribal militias in Western Bahr el Ghazal during the Second Sudanese Civil War. Although initially armed by the Sudanese government in order to fight against South Sudanese separatists, the Army of Peace became especially notorious for massacring Dinka civilians. These mass killings grew so excessive that the group even came into violent conflicts with other pro-government forces. The militia was mostly disbanded in 1988, though a rump faction continued to be active and joined the Popular Defence Forces in 1989, and later the South Sudan Defense Forces (SSDF) in 1997.

The 2014 retreat from Western Bahr el Ghazal, also called the long march north, was an unorganized withdrawal by hundreds of Nuer Sudan People's Liberation Army (SPLA) deserters who sought to flee from Bahr el Ghazal to Sudan during the South Sudanese Civil War. After longstanding tensions between SPLA soldiers belonging to the Dinka and Nuer ethnic groups escalated on 25 April 2014, leading to a massacre of Nuer soldiers at Mapel in Western Bahr el Ghazal, a large number of Nuer SPLA soldiers deserted to escape ethnic prosecution and loyalist SPLA forces. Though some deserters joined SPLM-IO rebels or surrendered to the government, a large number of them marched northward, joined by other SPLA defectors from Northern Bahr el Ghazal. After covering over 400 kilometres (250 mi), this trek eventually arrived in Sudan on 4 August 2014, where they were disarmed.