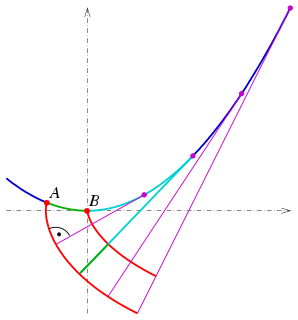 An involute is a particular type of curve that is dependent on another shape or curve. It is the path taken by the end of an idealized string as it wraps around a curve. 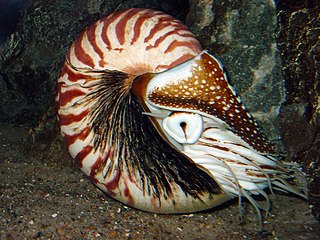 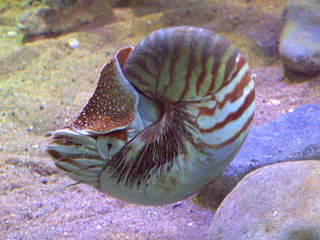 The Nautilida constitute a large and diverse order of generally coiled nautiloid cephalopods that began in the mid Paleozoic and continues to the present with a single family, the Nautilidae which includes two genera, Nautilus and Allonautilus, with six species. All told, between 22 and 34 families and 165 to 184 genera have been recognised, making this the largest order of the subclass Nautiloidea.

Thuringionautilus, which comes from the Upper Triassic of Europe, is similar to Tainionautilus , but with smooth sides and a sharper furrow along the venter, and to Tainoceras which differs in having a wider, shallower ventral furrow and separate ventral and ventro-lateral nodes.

Tainonautilus is an extinct coiled cephalopod that lived during the Permian and Early Triassic which is included in the nautiloid family Tainoceratidae.

Tithonoceras is a genus of nautiloid cephalopod from the Upper Jurassic found in the Crimea, belonging to the nautilacean family Paracenoceratidae.

The Trigonocerataceae are a superfamily within the Nautilida that ranged from the Devonian to the Triassic, thought to have contained the source for the Nautilaceae in which Nautilus is found.

The Tripteroceratidae is a family of depressed, straight to slightly curved nautiloid cephalopods from the middle and upper Ordovician with generally flattened venters and empty siphuncles with straight to inflated sedments included in the Oncocerida.

Grypoceratidae is the longest-lived family of the Trigonocerataceae, or of the near equivalent Centroceratina; members of the Nautilida from the Upper Paleozoic and Triassic.

The Centroceratidae is the ancestral family of the Trigonocerataceae and of the equivalent Centroceratina; extinct shelled cephalopods belonging to the order Nautilida

Mandaloceratidae is a family in the nautiloid cephalopod order Discosorida, from the Middle and Upper(?) Silurian characterized by short, essentially straight shells referred to as breviconic, typically with a faintly exogastric shape produced by the profile of the body chamber. Apertures vary from round to T-shaped, with a long narrow, ventral, hyponomic sinus for the maneuvering funnel. Siphuncles are commonly central or subcentral with generally broad, expanded, segments and usually thin connecting rings.

Aphelaeceras is an extinct genus from the nautilid family Trigonoceratidae which is part of the Trigonocerataceae, that lived during the Mississippian Period in the late Paleozoic.

Peripetoceras is a genus in the Clydonautilacean family, Liroceratidae. It can be recognized by its smooth, involute shell with a deep small umbilicus with rounded shoulders and steep convex wall; whorl section with flattened venter, rounded ventral shoulders and convergent slightly convex flanks; suture with slight ventral and lateral lobes; and small siphuncle located dorsally of the center. 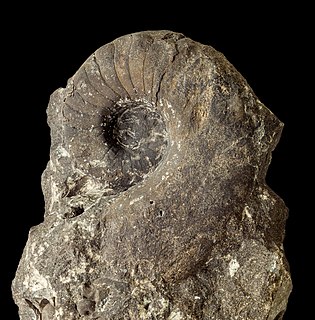 Metacoceras is a nautilitoid cephalopod from the Upper Carboniferous (Pennsylvanian) and Permian, the shell of which is moderately evolute with a subquadrate whorl section, bearing nodes on the ventral or umbilical shoulders or both, but otherwise smooth. The siphuncle is small, subcentral and orthochoanitic. The suture has shallow ventral and lateral lobes but no dorsal or annular lobe.

Enoploceras is a Tainoceratid genus, a nautiloid cephalopod in the order Nautilida, known from Triassic sediments in Europe, India, Timor, and the state of Idaho.

Pseudonautilidae is a family of Jurassic and Lower Cretaceous nautilid cephalopods belonging to the same superfamily as modern Nautilus, Nautilaceae, but forming a different branch from the family Nautilidae. Pseudonautilids, together with other nautilids, were contemporary with the ammonoids, which comprise an entirely different set of shelled cephalopod stocks more closely related to octopus and squid.

The Tetragonoceratidae is a small family of nautilitids constituting a part of the superfamily Tainocerataceae in which shells are coiled with a generally quadrate whorl section. Coiling is either gyroconic or evoluute with a slight dorsal impression. Flanks diverge from the umbilical to the ventral shoulders so as to make the whorl sections widest close to the venter. Nodes made develop on the flanks and shoulders. The siphuncle is tubular, typically found near the venter. Sutures are with lateral lobes and may possess dorsal and ventral lobes as well.

Nassauoceras is a tetragonoceratid nautiloid from the Middle Devonian of Europe, the shell of which is evolute with a wide, deep umbilucus, slight dorsal impression, low arched venter, rounded ventral shoulders, and flanks that converge dorsally so as to produce a subtrigonal whorl section. Nodes are present on the ventral shoulders. Sutures have shallow ventral and lateral lobes. The siphuncle is near the ventral margin.

Doulingoceras is a genus of ammonoid within the ceratitid order, found in China,that lived during the Late Permian during the time span from about 260.5 to 254 million years ago. The genus is included in the family Paraceltitidae, which belongs to the superfamily Xenodiscaceae. 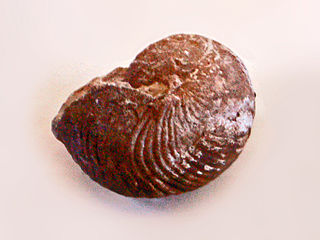 Deltocymatoceras is an involute cymatoceratid (Nautilioidea-Nautilida) with broadly arched whorl sides, strongly convergent on a narrow venter that bears a slight, rounded, keel-like ridge, and with no distinct ventro-latera shoulders. Sides bear cymatoceratid ribs that bifurcate near the middle of the whorl sides, but do not cross the venter. The suture has a somewhat pointed ventral saddle, broad lateral lobes and prominent saddles on the umbilical shoulders. The position of the siphuncle in undetermined. 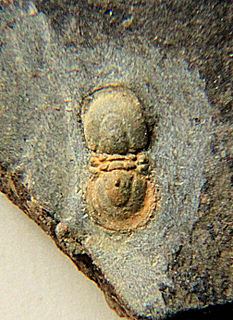 Geragnostus is a genus of very small agnostid trilobites whose fossils are found Ordovician-aged marine strata from Eurasia, North America and Argentina.

Domatoceras is a nautiloid genus and member of the Grypoceratidae from the Pennsylvanian and Permian with a wide spread distribution.