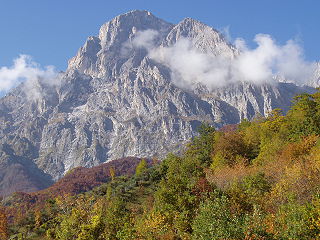 Corno Grande is the highest point in the Apennine Mountains, situated in Abruzzo, central Italy. Part of the Gran Sasso massif, it is the highest peak of the Italian Peninsula at 2,912 metres (9,554 ft). It is the highest peak in mainland Italy outside of the Alps, and the second highest in the entire country outside the Alps, after Mount Etna in Sicily. It has significant vertical relief on the north side, though its south side is less elevated than the adjacent Campo Imperatore plateau.

Punta La Marmora is a mountain in the Gennargentu range, Sardinia (Italy). 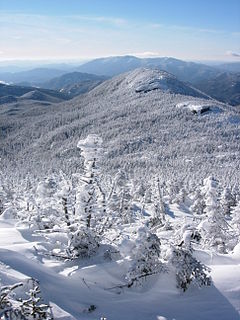 Gray Peak is the seventh-highest peak in the High Peaks Region of the Adirondack Park, in New York, United States, and is located in close proximity to Mount Marcy, the highest peak in New York state. Gray Peak is southwest of Mt. Marcy and southeast of Mount Colden. It was named for Asa Gray by Verplanck Colvin. 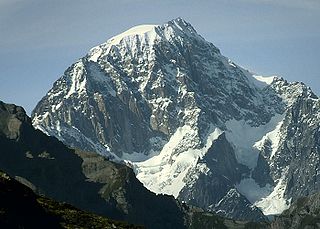 Mont Blanc de Courmayeur is a point on the south-east ridge of Mont Blanc that forms the peak of the massive south-east face of the mountain. It is connected to the main summit via the Col Major.

Monte Petrella is the highest peak in the Aurunci Mountains, in southern Lazio, central Italy. It has an elevation of 1,533 metres (5,030 ft).

The Bald Mountains are a mountain range rising along the border between Tennessee and North Carolina in the southeastern United States. They are part of the Blue Ridge Mountain Province of the Southern Appalachian Mountains. The Bald Mountains stretch from the Pigeon River in the south to the Nolichucky River in the north, and comprise parts of Cocke County, Greene County, and Unicoi County in Tennessee and parts of Madison County and Yancey County in North Carolina. The Great Smoky Mountains border the range to the south, and the Unakas rise opposite the Nolichucky to the north. The range gets its name from the relatively frequent occurrence of grassy balds atop the more prominent summits.

The Dreiherrnspitze, at 3,499 m (11,480 ft) above mean sea level, is a mountain on the tripoint between the Austrian states of Salzburg and Tyrol, and South Tyrol in Italy. It is part of the Venediger Group in the Hohe Tauern range of the Central Eastern Alps and the Alpine divide.

The Cima Undici - Elferkofel is a mountain in the Sexten Dolomites in South Tyrol, Italy. 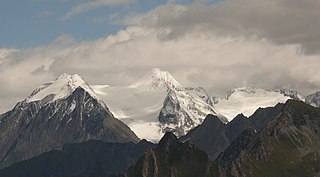 The Hochfeiler is a mountain, 3,510 metres high, and the highest peak in the Zillertal Alps on the border between Tyrol, Austria, and South Tyrol, Italy. 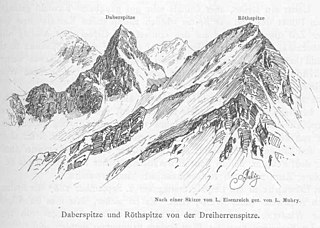 The Rötspitze is a mountain in the Hohe Tauern on the border between Tyrol, Austria, and South Tyrol, Italy. 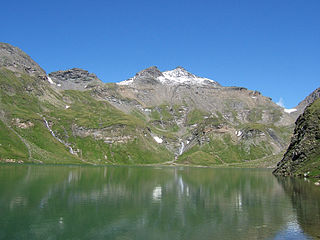 The Wilde Kreuzspitze is a mountain in the Zillertal Alps in South Tyrol, Italy.

Rocca Bernauda is a mountain of the Alps of 3,222 metres (10,571 ft). It has been the westernmost point of Italy since the cession of Valle Stretta ay the Paris Peace Treaties of 1947.

Monte Gavia is a mountain of the Sobretta-Gavia Group in Lombardy, Italy. It has an elevation of 3,223 metres and towers above the Gavia Pass.

Monte Bondone is a mountain of Trentino, northern Italy, located west of the provincial capital of Trento. It has an elevation of 2,180 metres (7,152 ft) and includes a ski resort on one side. It is the highest mountain of the Garda Prealps and with a prominence of 1,685 metres (5,528 ft) qualifies as an Ultra. It lies between the Etschtal valley in the east and the Sarca valley in the west. Due to its location high above the city, it is often called the mountain of Trento. 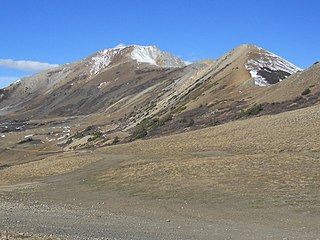 Italian Mountain is a high mountain summit in the Elk Mountains range of the Rocky Mountains of North America. The 13,385-foot (4,080 m) thirteener is located in Gunnison National Forest, 13.2 miles (21.3 km) east-northeast of the Town of Crested Butte in Gunnison County, Colorado, United States. Italian Mountain was so named because the mountain's tones were said to resemble the colors of the Italian tricolor: green, white, and red. 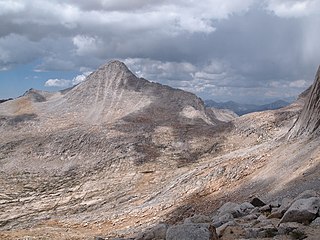